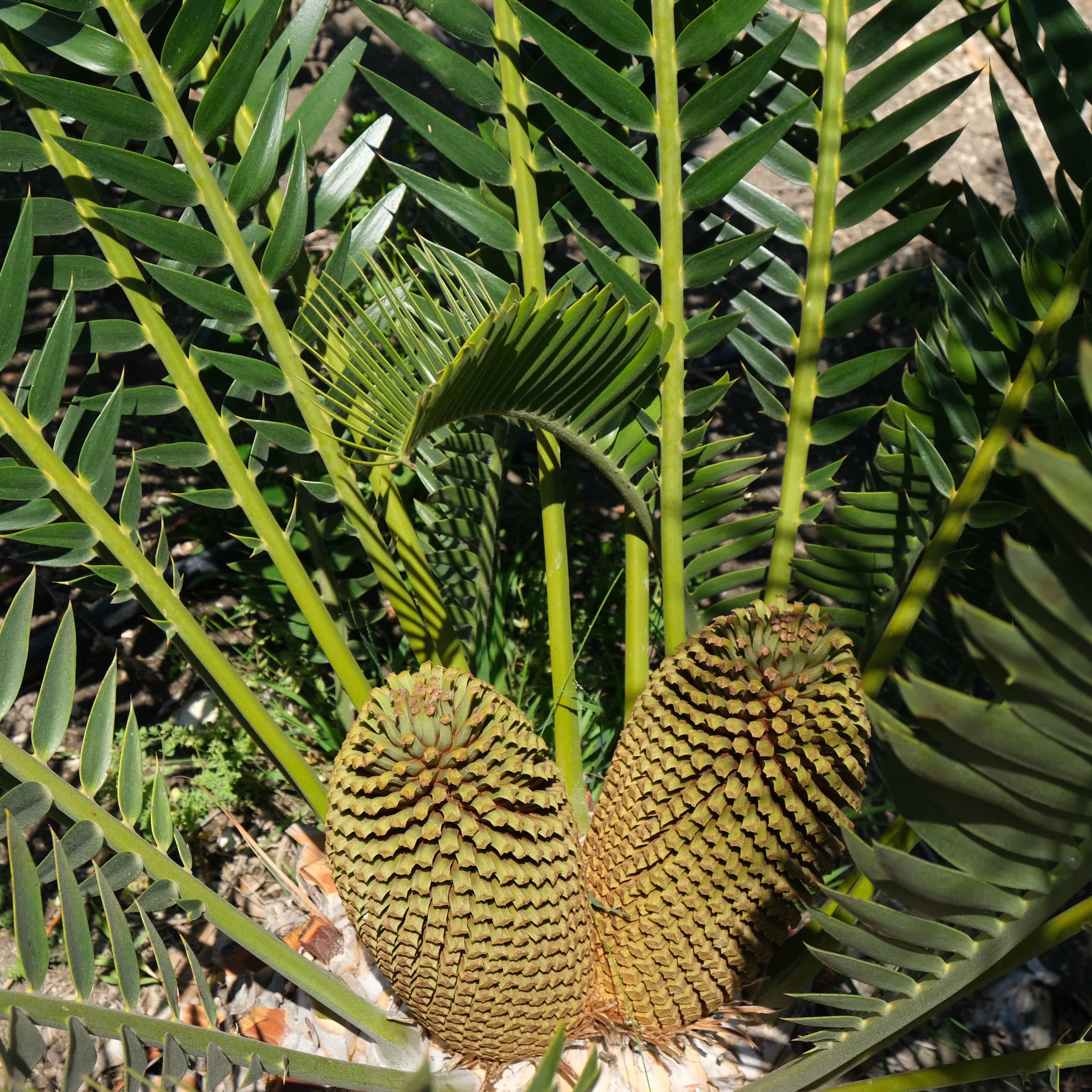 Origin and Habitat: Encephalartos longifolius is widely distributed in the coastal regions of Eastern Cape Province of South Africa from West of Joubertina in the Kouga mountains, along the Suuranys mountains, in the Baviaanskloof, the Elandsberg, the Zuurberg and then on to near Grahamstown. Large subpopulations occur in the Kouga Mountains, Baviaanskloof, Groot Winterhoek mountains, and the Zuurberg. Ot occurs in large numbers in some areas, but on the whole, populations are declining .
Altitude range: 652-2,297 ft (200-700 m) above sea level.
Habitat and Ecology: It grows in a variety of habitats with large differences in soil and climate, mostly in dense scleromorphic shrubland on steep exposed rocky slopes. In some areas west of Port Elizabeth plants grow in acid sands with fynbos vegetation whereas in the Zuurberg they occur in grasslands. Near Kirkwood and in the Paardepoort plants grow amongst succulent thicket. Encephalartos longifolius has recently been found in association with Encephalartos horridus on a hill near Uitenhage but no hybridization between the two species was observed. The only real threat to E. longifolius is over-collection due to poaching of plants from the wild. 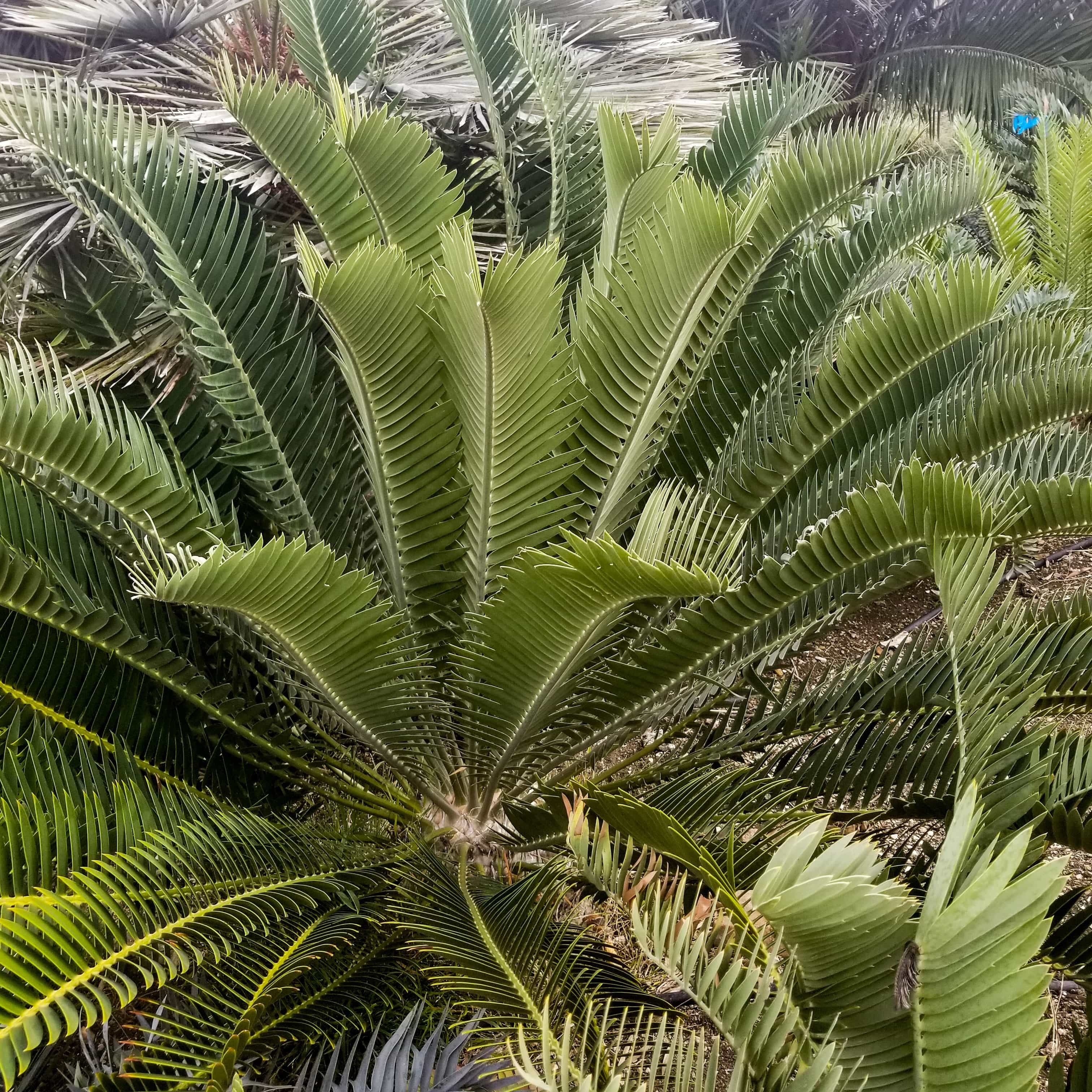 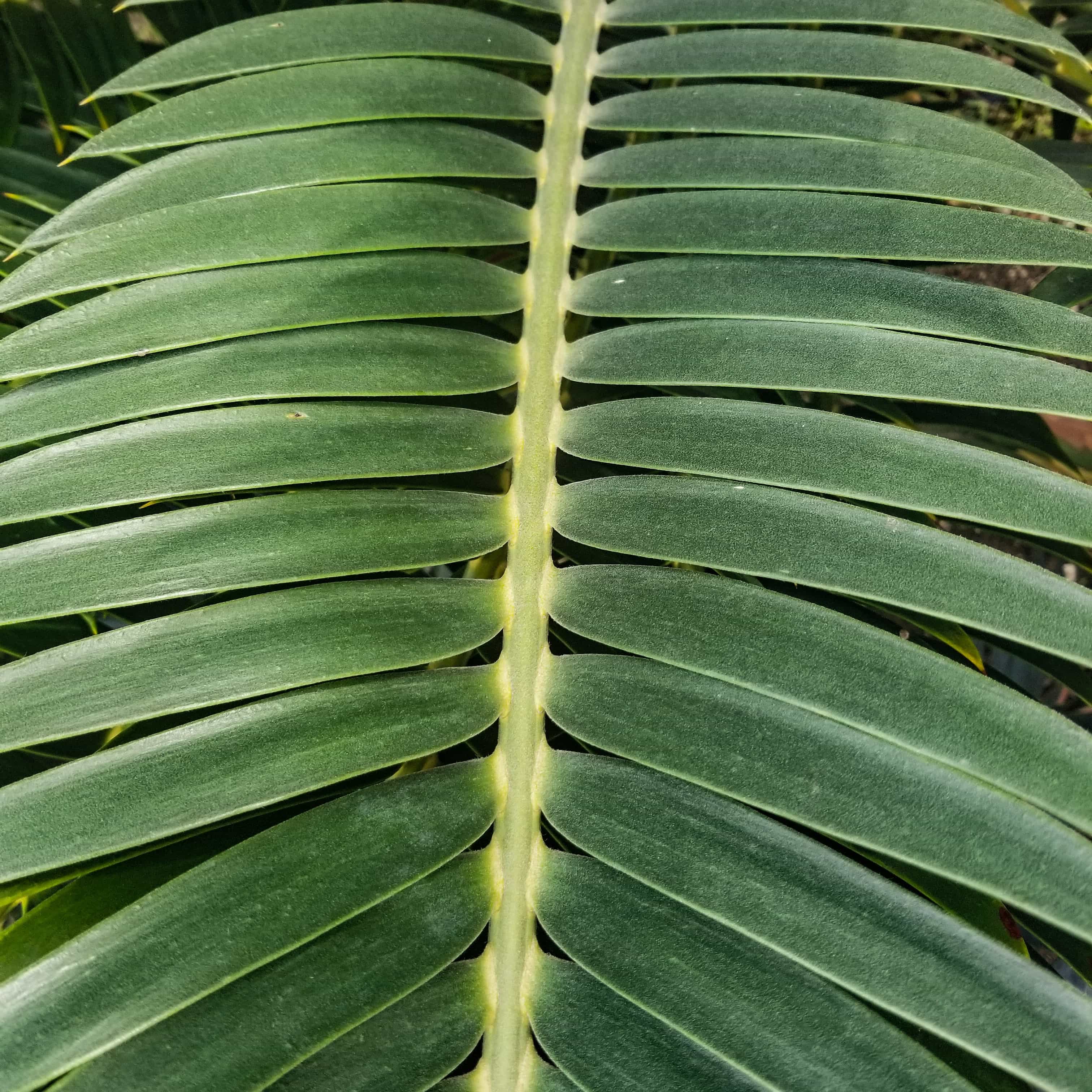 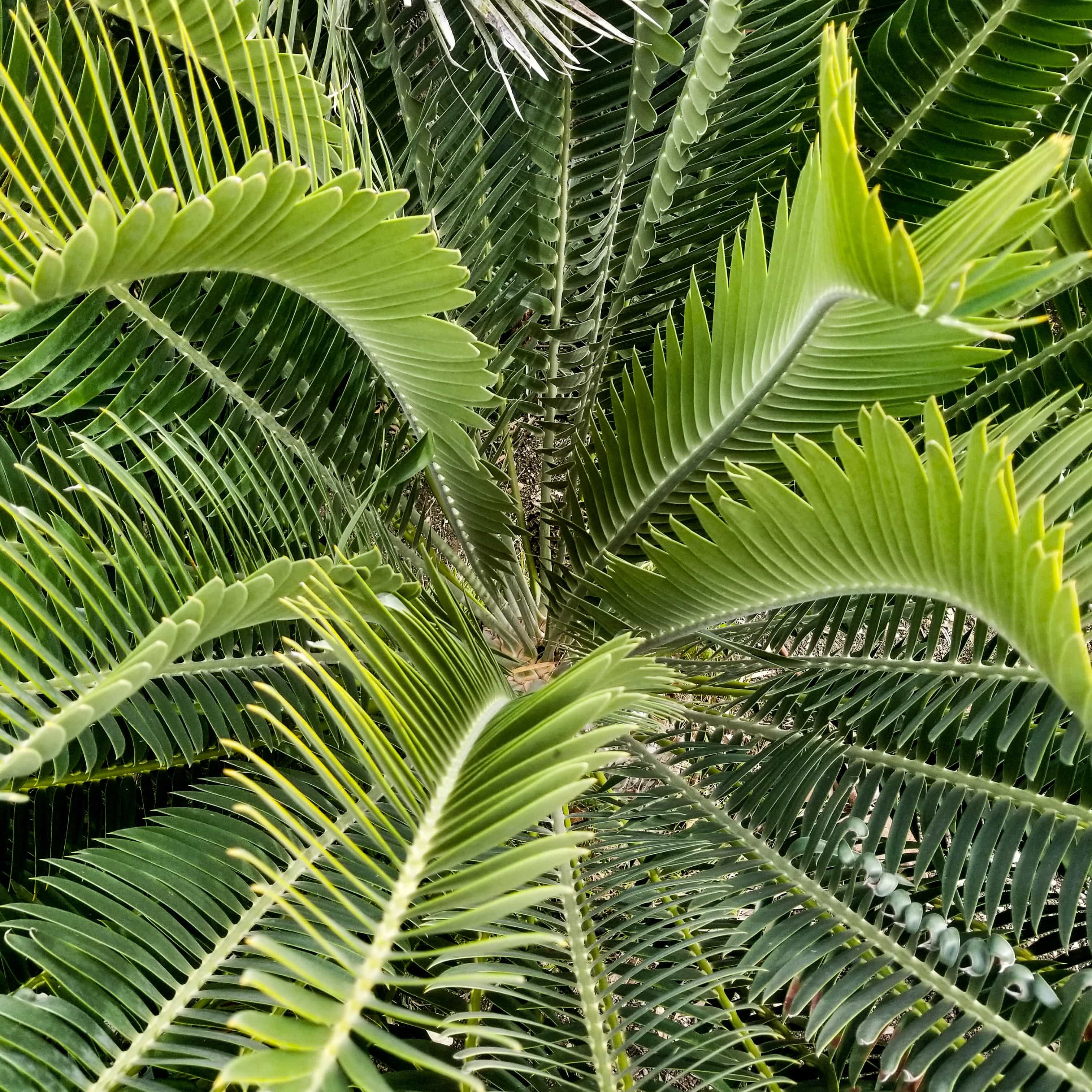 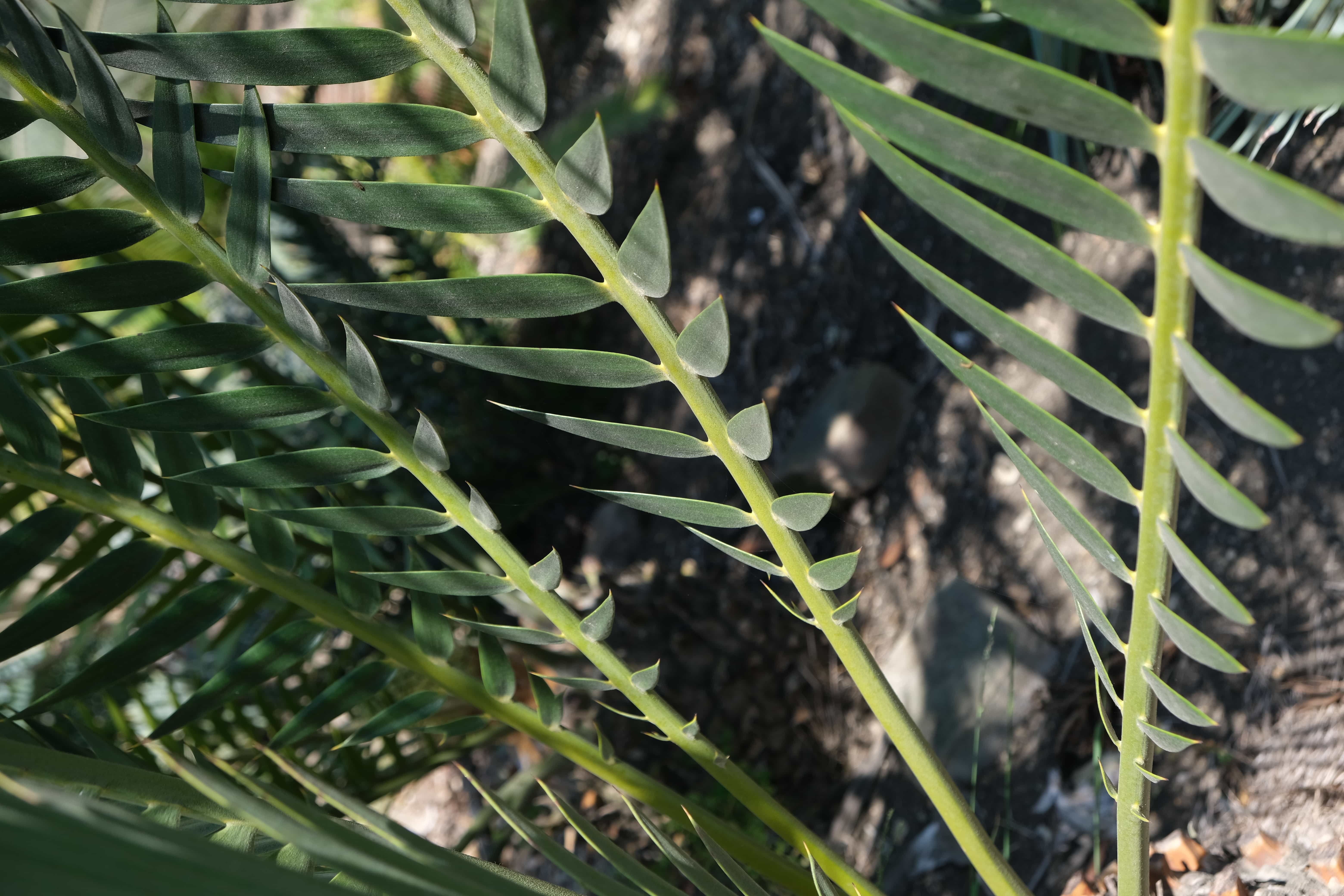 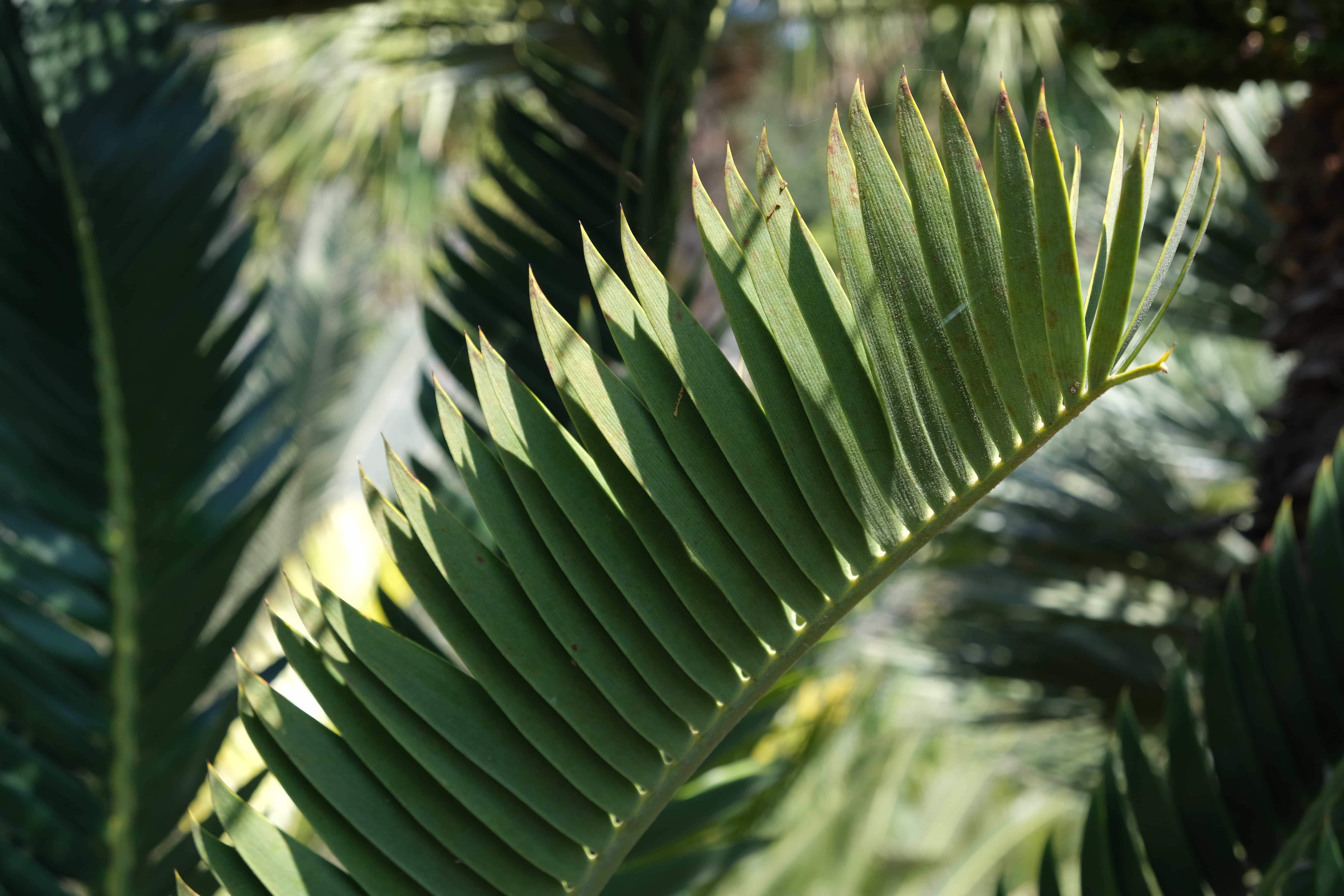 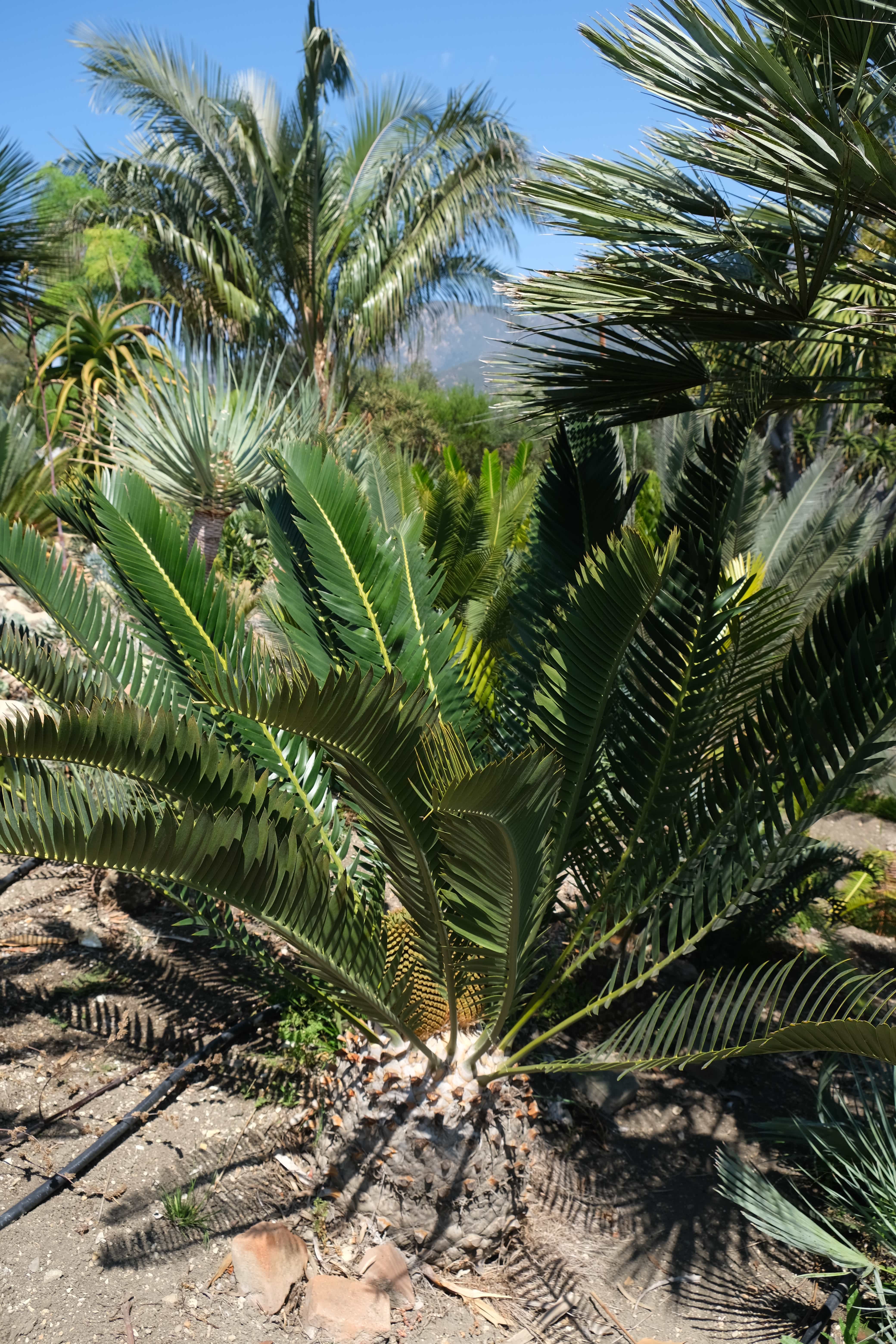 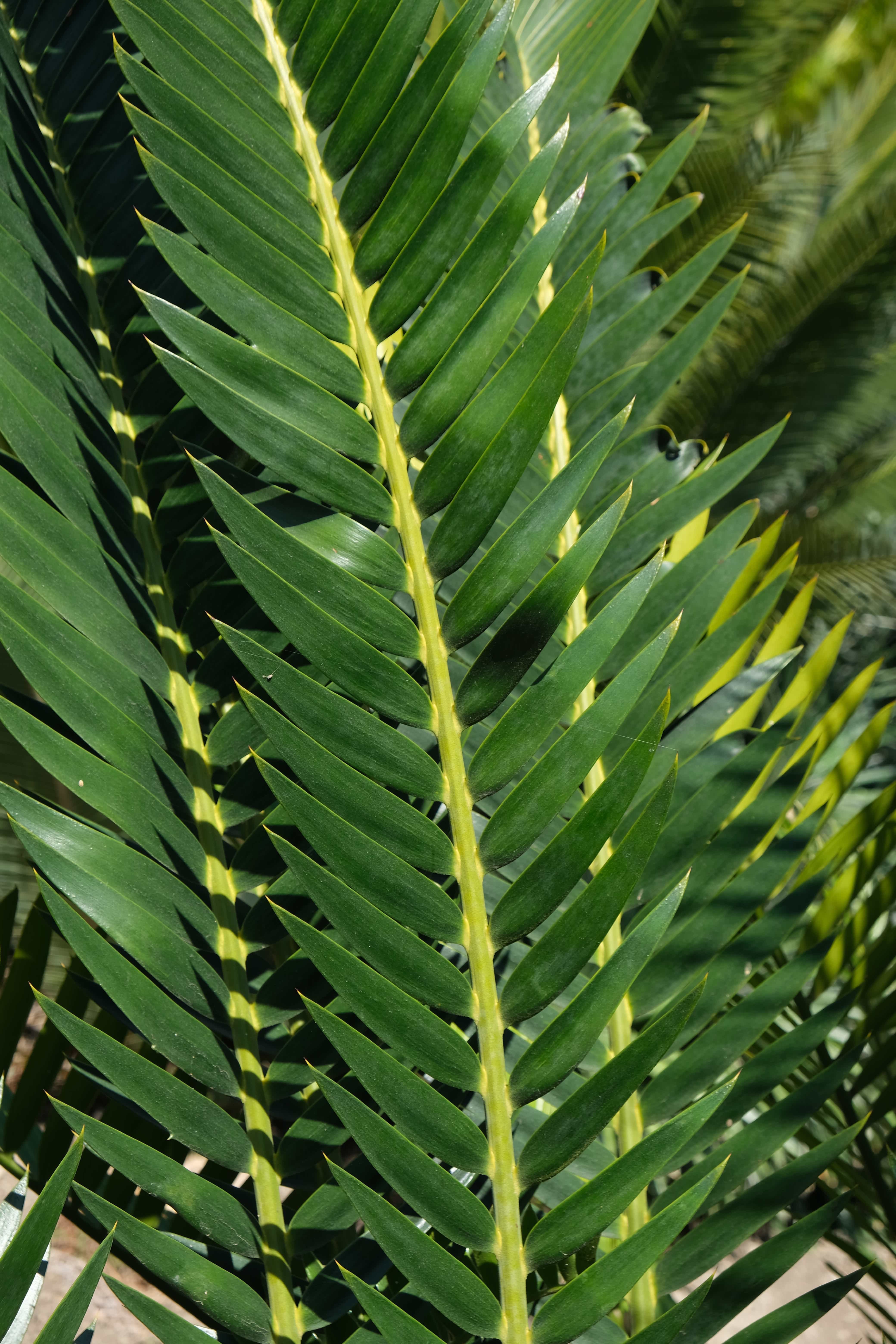 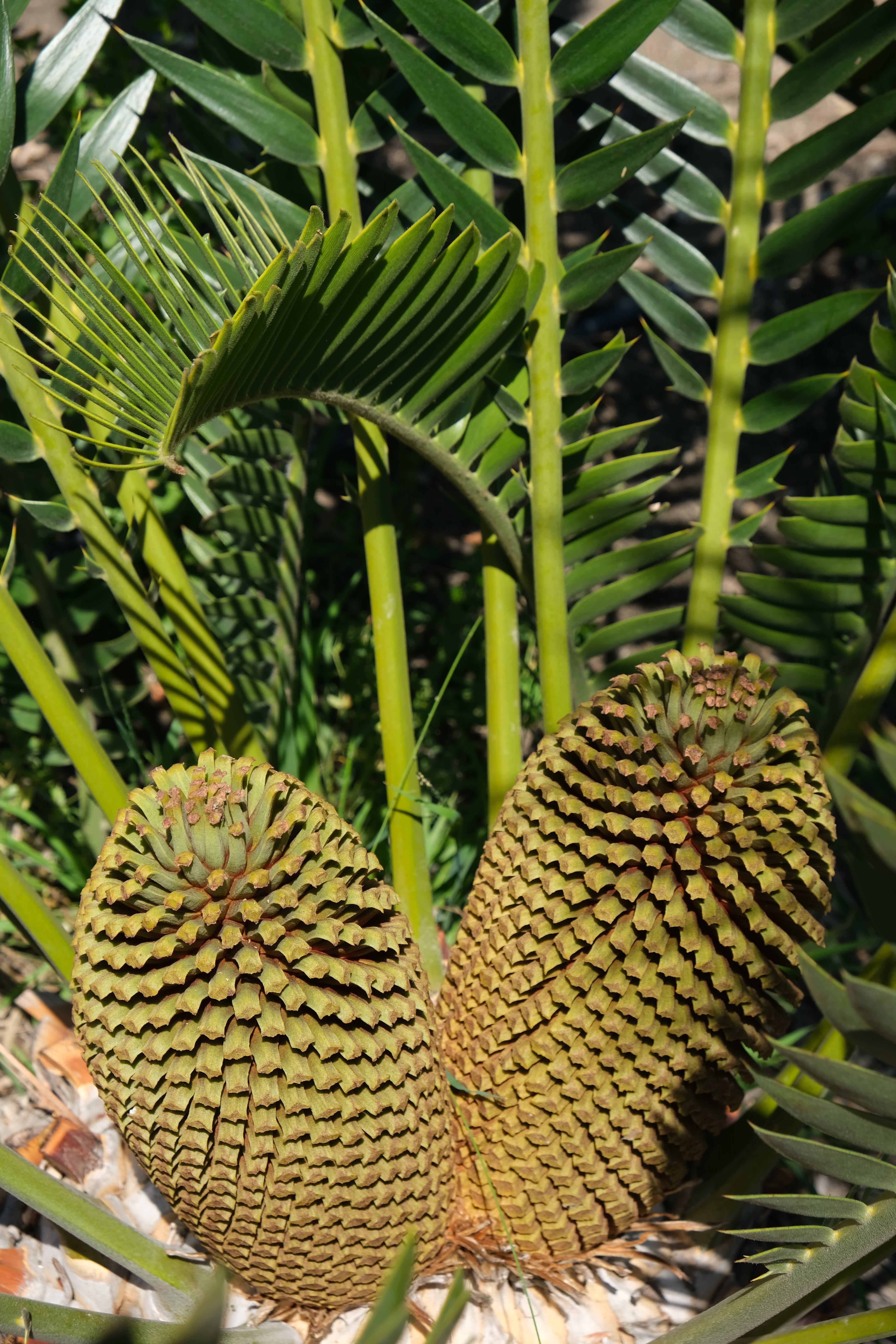 Description:Encephalartos longifolius is a rare cycad from the genus Encephalartos. It looks like a small palm tree with fernlike leaves, but producing cones, often resembling those of a pine but far larger. The cones of this species are among the largest in the genus and may weigh up to about 30-40 kg.
Distinguishing features: Distinguishing features of this species, which was confused by Thunberg with the stemless Encephalartos caffer, and figured as such in the Botanical Magazine (tab. 4903) are the slightly dull and slightly greyish fronds curled hook-like at tops with entire leaflets arranged in a distinct V and overlapping towards the end of the leaf characterise this species; they are often quite entire. These leaf characters and the very large green to greenish brown cones distinguish this species from other green species from the eastern Cape Province (Encephalartos altensteinii and allies).
Derivation of specific name: The species name comes from the Latin longis, long and folius, leaf.
Stems: Stem well-developed, stout, up to 3 m tall, occasionally up to even 4-5 m, 30-45 cm in diameter, simple or rarely branched, the top dome-shaped between the bud and the mature leaves. The pith is used in making “Kaffir bread”.
Roots: Coralloid (meaning coral-like) roots. These roots contain symbiotic cyanobacteria that fix gaseous nitrogen from the atmosphere and provide essential nitrogenous compounds to the plant. This can be a great advantage, as many cycads grow in nutrient-poor habitats.
Leaves:* Numerous in a crown,100-175(-200) cm long including petiole, dark green or blue green, semiglossy, moderately keeled (opposing leaflets inserted at 80-120° on rachis). Petiole fairly long (15-35 cm), straight, with no prickles, hairy when young. Rachis yellowish, straight to arcuate, with last third sharply recurved, not spirally twisted, finely pubescent, gla-brescent with age except for woolly pulvinus, rounded below, with a prominent thick rib on the upper side, produced beyond the leaflets at the top. Leaf-base collar prominent; basal leaflets not reducing to spines. Leaflets crowded, semi-erect (forming rather a wide V, insertion angle obtuse c. 45-80°) lanceolate, obtuse to sharply acute at the apex, contracted and rather broad at the base (sometimes reduced to one or two prickles), rather obscurely nerved, strongly discolorous, overlapping upwards, not lobed or with 1-2 lobes on upper and median leaflets; margins flat, or incurved; upper margin entire (no teeth); lower margin entire (no teeth), or or with 1-3 very short pungent or blunt theeth usually on one side; median leaflets 17-20 cm long, 20-30(-40) mm wide, finely pubescent, glabrescent with age, more rigid, thicker and darker green than in Encephalartos altensteinii. In some relatively young specimens, particularly in the most westerly area of distribution, the leaves are decidedly glaucous, giving the impression that two distinct species are present, but field observations near Joubertina indicate that it is merely infraspecific variability.
Cones: 1 or 2 on short stout peduncles, greenish-brown with reddish adpressed hairs.
Pollen cones: Sessile or subsessile,1-3, oblong-lanceolate in outline, green, normally about 40-60 cm long, 15-20 cm on diameter. Scales in very numerous spirals, lanceolate, acuminate with blunt hooked tops.
Seed cones: Sessile, up to 40 kg in weight, 1-3, ovoid, green, 40-60 cm long, 30-40 cm in diameter. Scales in less numerous spirals than in the male, rhomboid, umbonate, very rugose
Seeds: Broadly, oblong, 40-50 mm long, 20-30 mm wide, sarcotesta red, with fleshy beak.

Cultivation and Propagation: Encephalartos longifolius is an adaptable plant well suited to warm temperate and subtropical climates, and can handle light frosts. With its bright foliage heightened by full sun is a commanding accent plant in the general landscape and makes an excellent tubbed specimen It can be grown in full sun without its leaves burning. Its beauty and ease of horticulture make it one of the finest cycads for use in the garden. It is partially drought tolerant, salt tolerant, and completely wind tolerant. As a garden plant, this cycad will usually hold one or two crowns of leaves, all in good condition. As a seedling, it often loses its previous year's leaves before the new leaves emerge. The seedlings need plenty of room for the tap root to develop and require very good drainage.
Growth rate: It is a long lived slow growing plant taking 15 to 20 years for one of these to produce a cone, so patience is a must.
Soils: It responds well to deep, fertile, slightly acidic, well drained, soil enriched with compost.
Waterings: In cultivation prefers plenty of water, especially in dry weather for optimal growth. But it is eventually drought resistant.
Fertilization: Naturally undemanding for nutrients, it responds very well to regular applications of fertilizer. Growth can be greatly improved through the application of fertilizers. Most growers find that a fertilizer having an even NPK (Nitrogen, Phosphorus, Potassium) balance, and supplemental trace elements, provides a good start for cycads.
Exposure: It will grow in partial shade, however best results are obtained growing the seedlings in full sun.
Traditional uses: These species yields stem sago and seeds, yielding a flour used for porridge or bread. The large, nutlike seeds found between the scales of the cones are no delicacy, being starchy and bland, but provide a useful food to many peoples. However, they are toxic in their natural state, and have to be processed quite elaborately before they are safe to eat. The poisonous properties are remove by pounding, soaking, and repeatedly changing the water, after which the macerated starchy substance is ground and baked. It may be sun-dried and stored for later use.
Hardiness: They do best in a tropical or sub-tropical climate and should be kept totally dry in winter at or around 50°F (10°C) but demonstrate a remarkable degree of cold resistance and may tolerate light frost for short periods if dry, however heavy frosts would probably be fatal.
Propagation: Plants are available from nurseries in many areas, however they are also easy to propagate from seeds. They can also be propagated from suckers with some patience and experience. 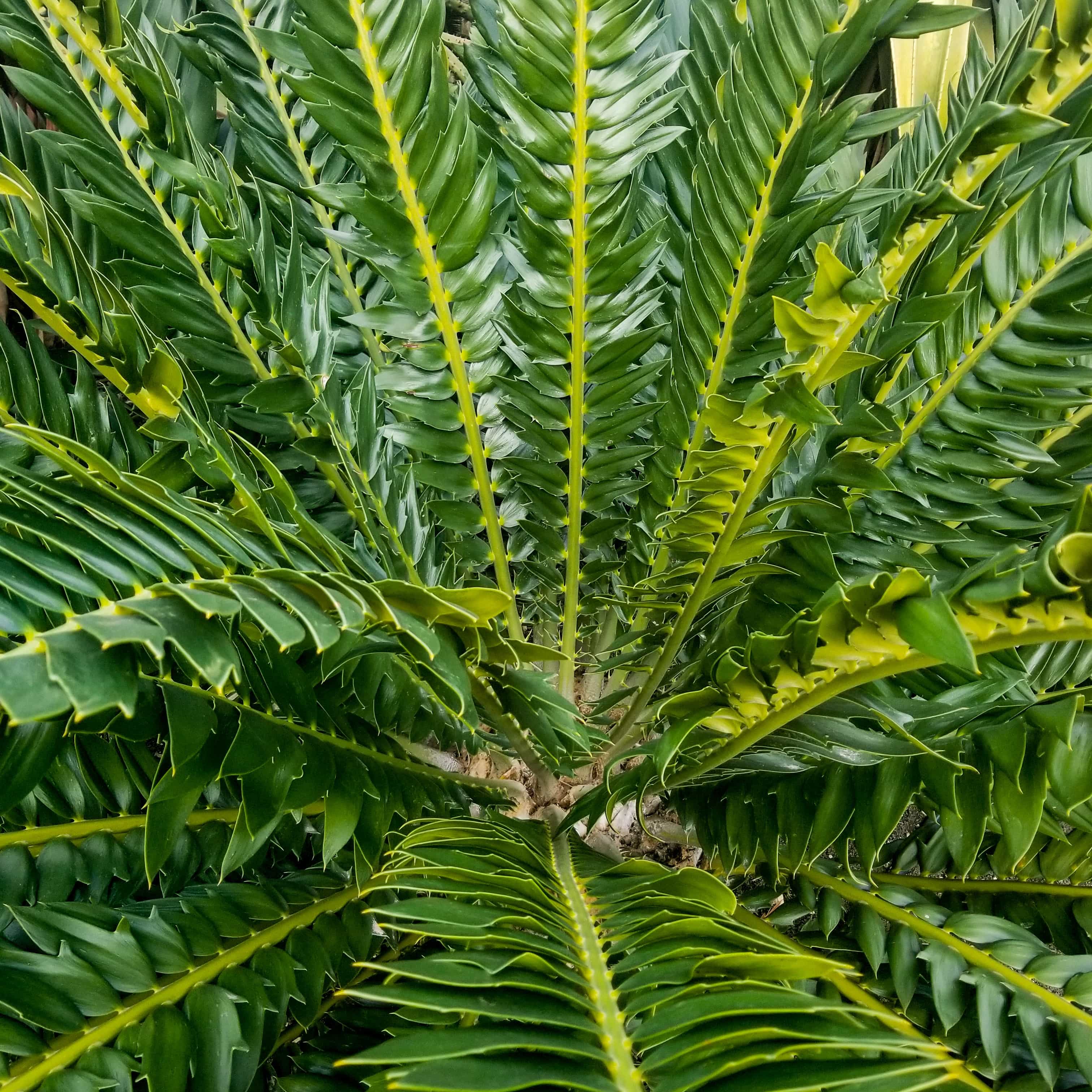 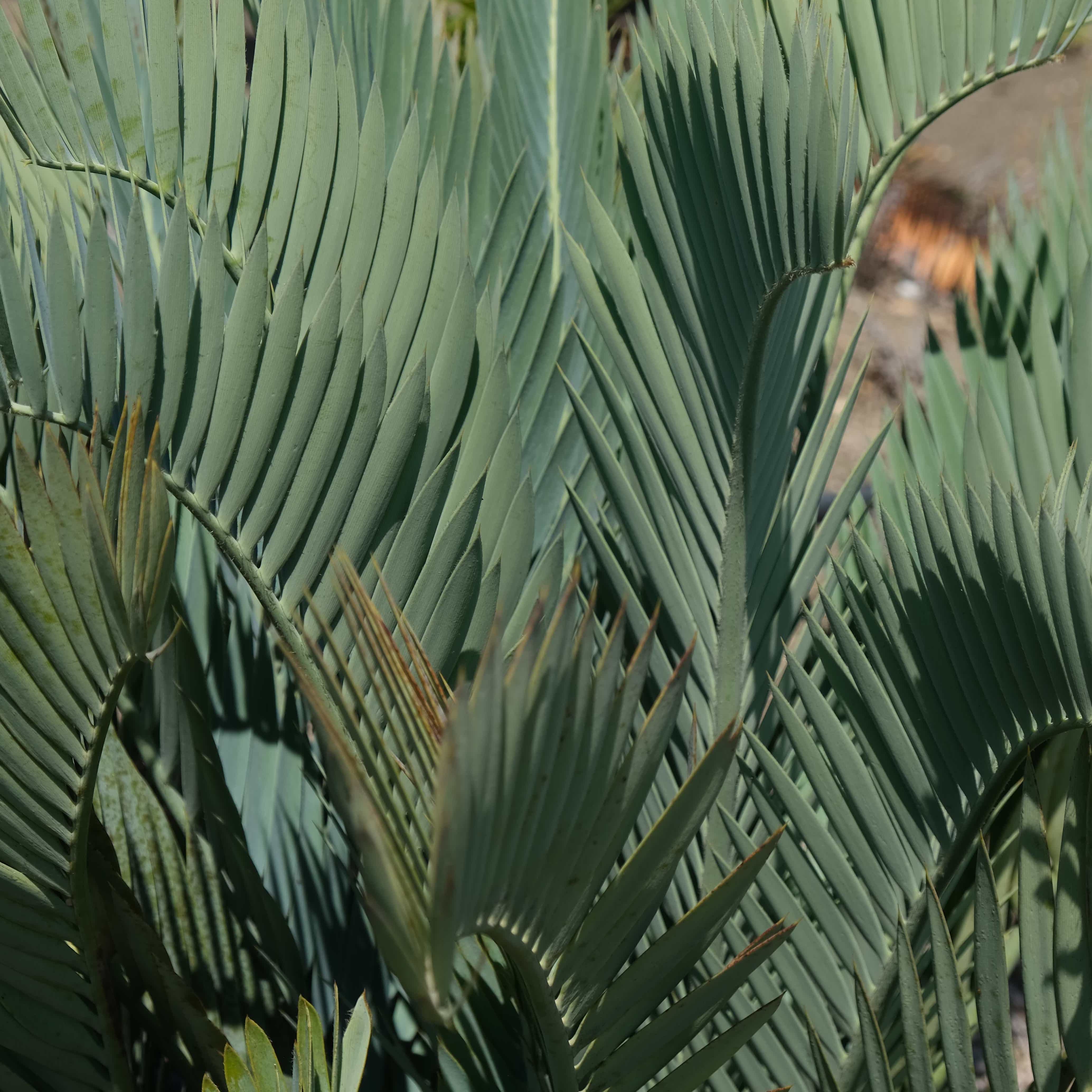 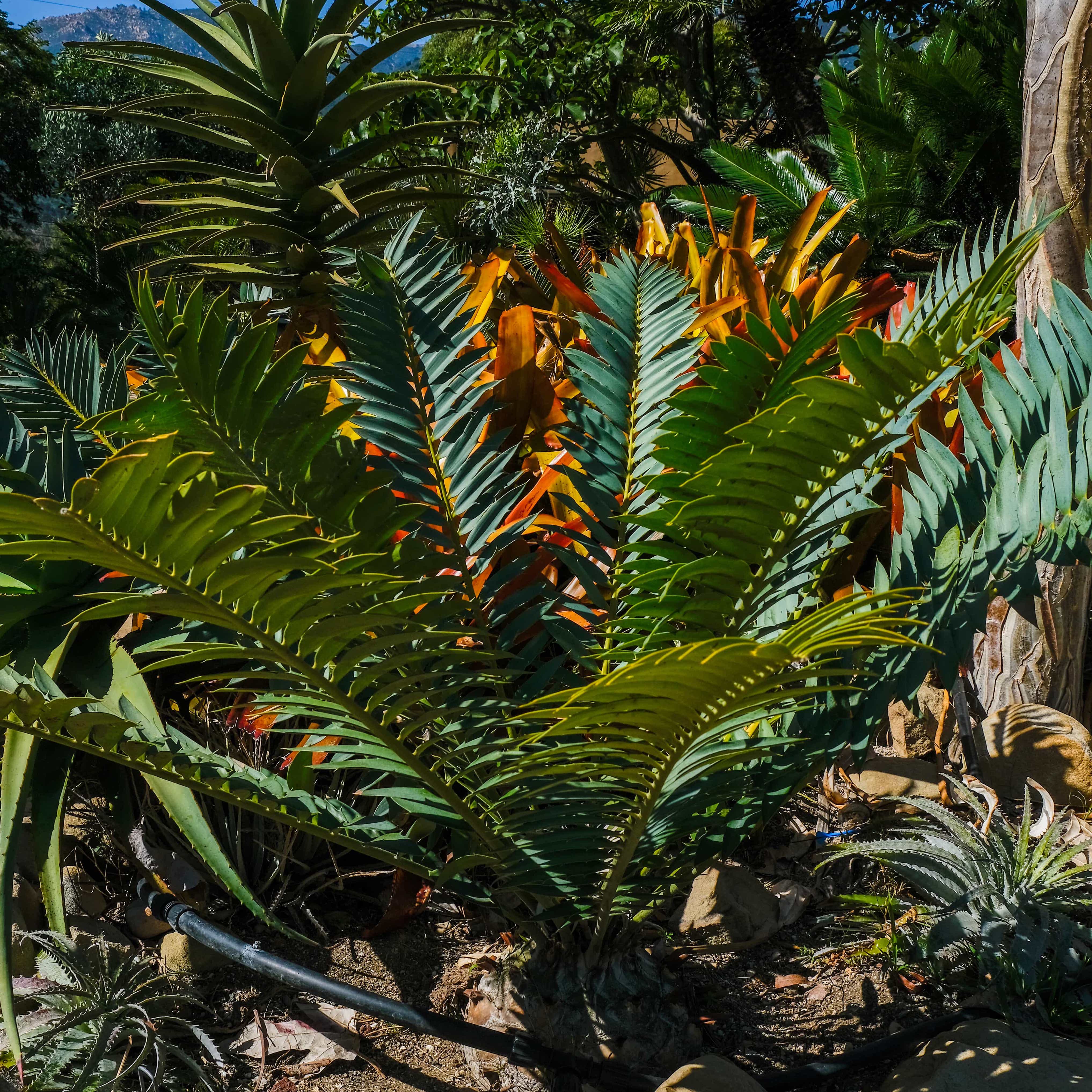