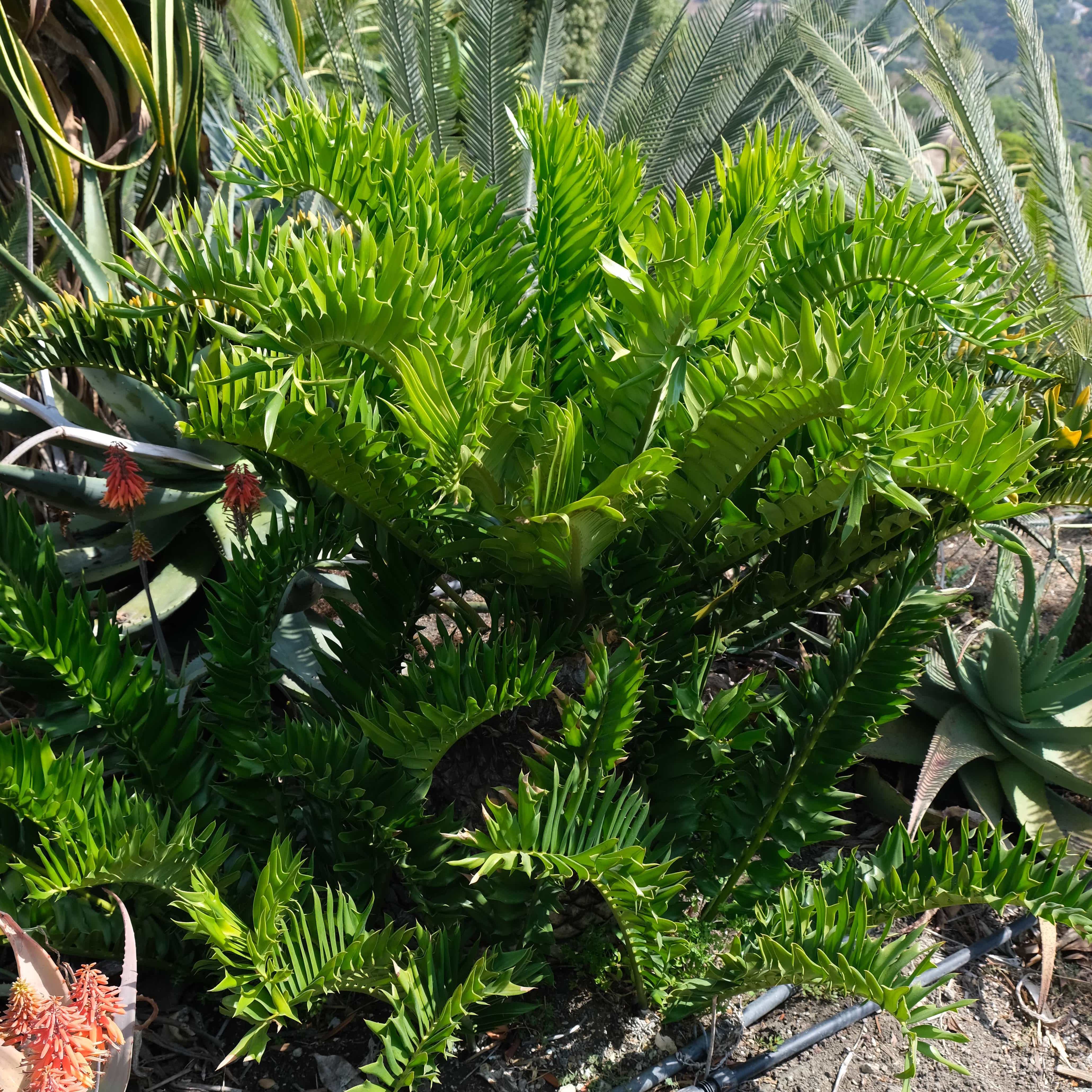 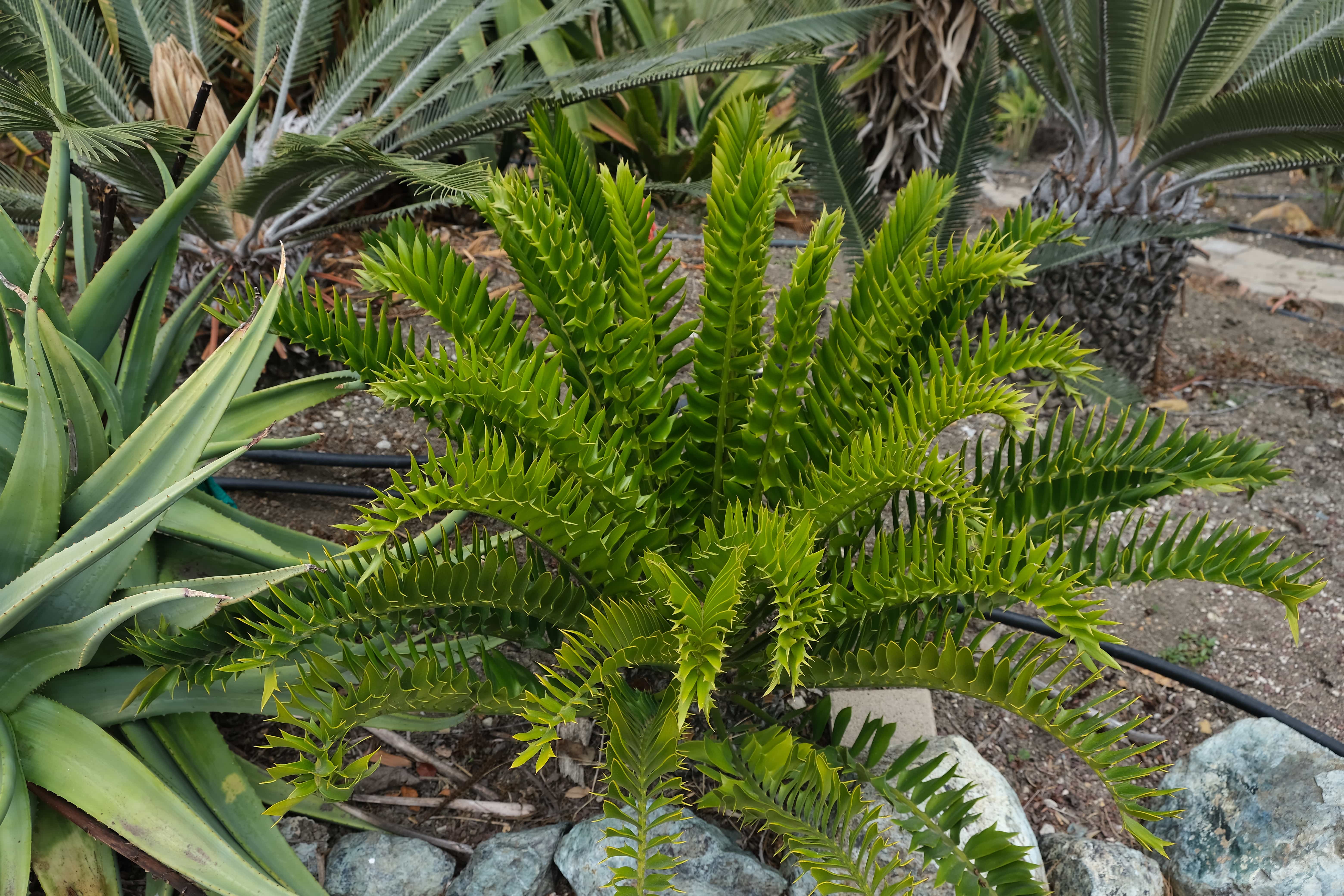 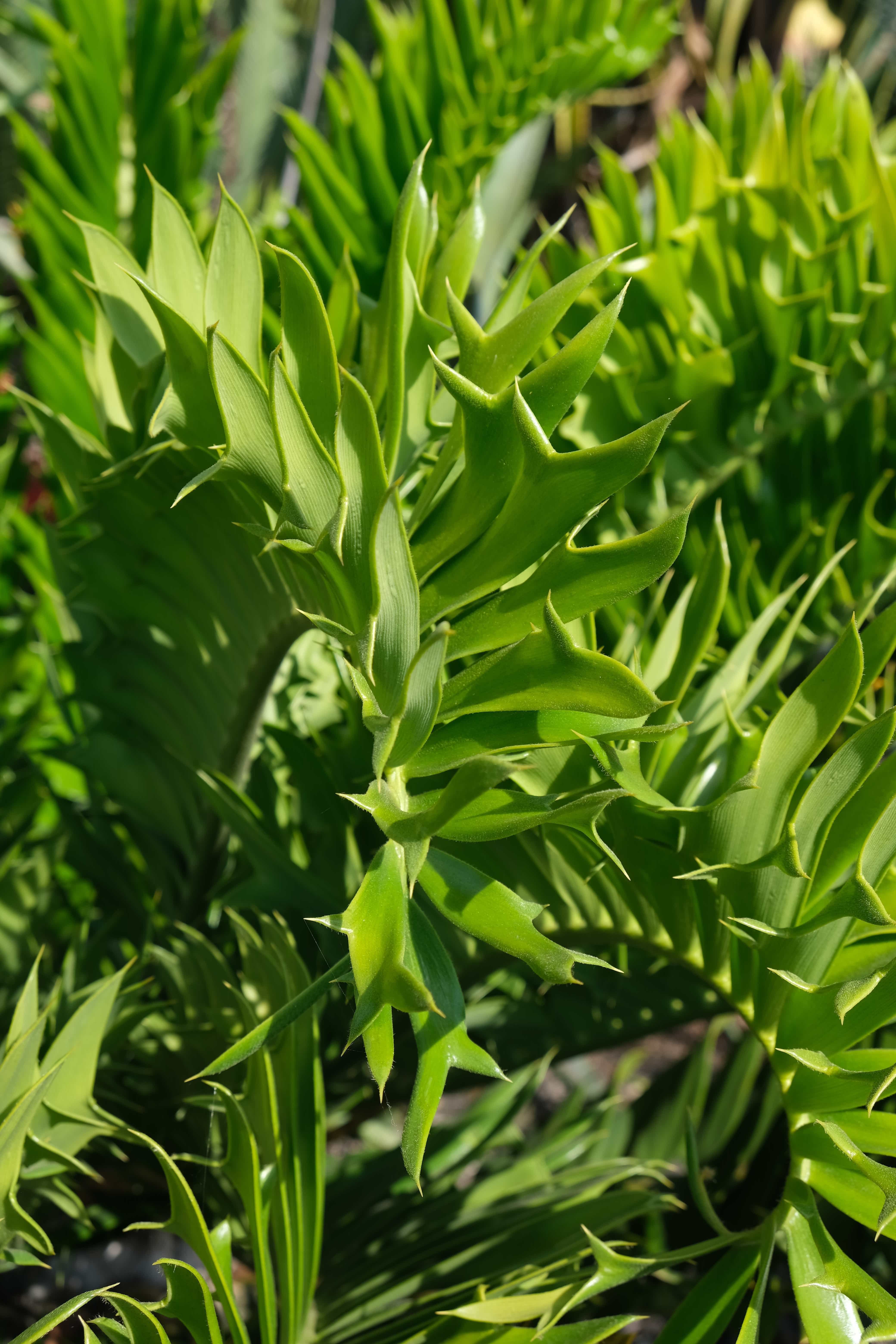 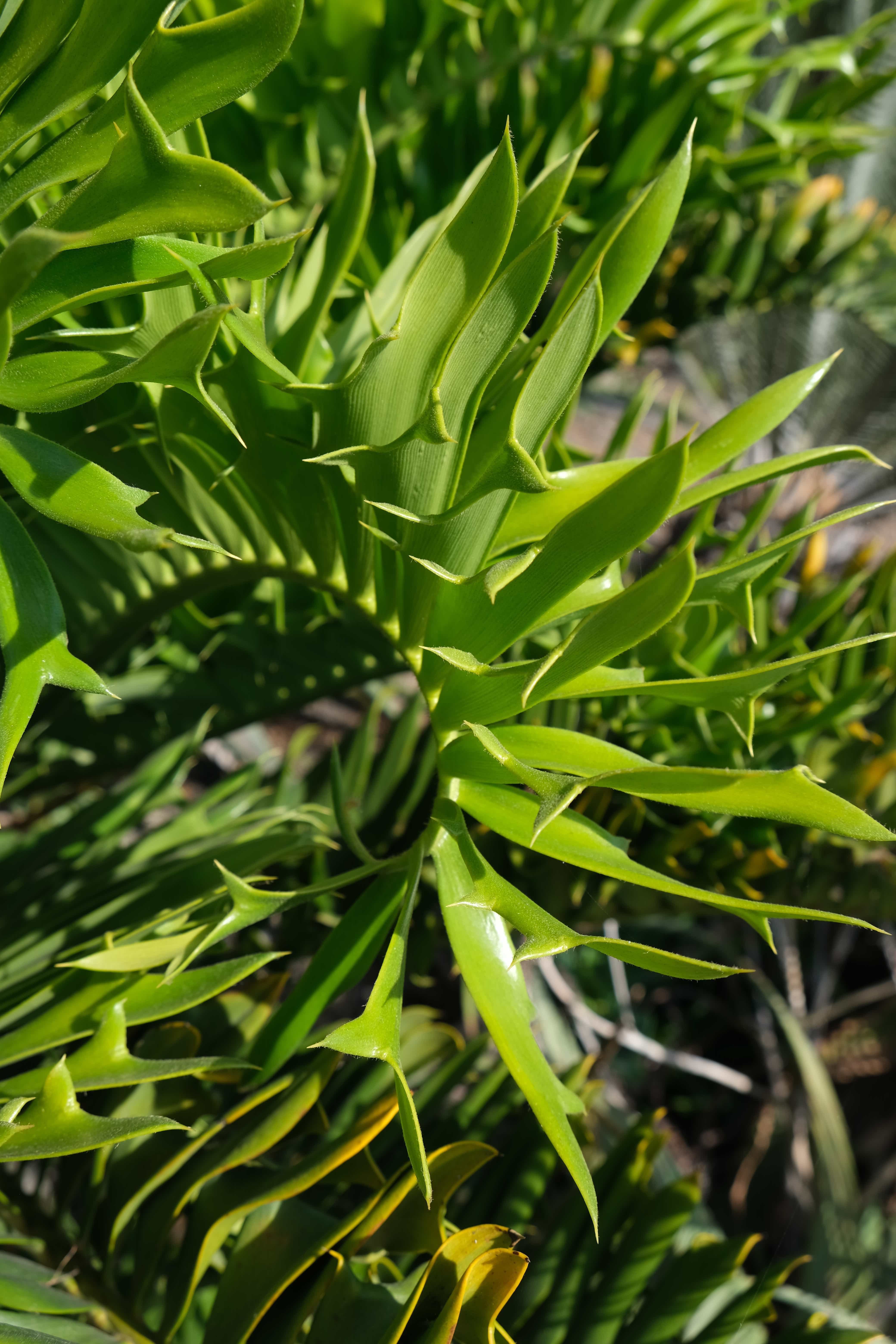 Stems of E. latifrons are up to 3m tall, and even as tall as 4,5m in exceptional cases, with a diameter of 30cm to 45cm.  Stems may be single but are more usually branched from the base, sometimes forming a number of stems and suckers.  Before new leaves emerge, the crown of the stem becomes woolly.

The beautiful broad leaves of E. latifrons may be 1m to 1,5m long with the top half or third, recurved or completely curled back.  The mature leaf is hard and rigid, with a glossy dark green colour.  The glossy rachis is clear and yellow.  The young leaf is covered by fine hairs, which are lost with age.  The petiole is 10cm to 20cm long and the leaf base has a conspicuous yellow-white collar.

One to three cones may be formed.  The colour of the cones is dark olive-green or dark bluish-green.  The cones are carried on very short stout stalks.  The cone scales are sparsely covered with fine hair.  The male cone is almost cylindrical in shape and 30 to 50 cm long and 8 to 17 cm in diameter.  It becomes narrower towards both ends.  The scales at the middle of the cone are approximately 6cm to 7cm long and 3cm to 3,5cm broad, with prominent 2cm long beaks, which are curved downwards or sideways.  The upper and lower surfaces of the scale are variably ribbed.  The female cone is barrel-shaped, 50cm to 60cm long and 25cm in diameter, with a mass of up to 27kg.  The median cone scales are about 8,5cm long and 5,5cm broad.  The scale face protrudes 2cm to 2,5cm and is deeply furrowed, wrinkled and pimply.  There are usually approximately 15 spirals of scales.  The seeds are red in colour and large, approximately 5cm long and 2cm to 2,5cm in diameter.  They are angled as a result of compression and have a fleshy beak.

The relatively few collectors who possess mature specimens of E. latifrons have found that they grow well in cultivation, as is obvious from the healthy plants in the fine collection at Kirstenbosch Botanic Garden in Cape Town, which was started more than 70 years ago.  The plants need very good drainage, however.  They would also require sufficient moisture and protection from frost.

E. latifrons has the reputation of being a very slow grower.  Professor Charles Joseph Chamberlain came to this conclusion during his visit to Trappes Valley, near Grahamstown, in 1912 (Chamberlain, C.J. "The Living Cycads"). He spoke to "a pleasant, gray-haired lady", the owner of a house where two specimens of E. latifrons and three of E. altensteinii were growing in the garden.  According to her, the plants were planted there "when she came to that house as a bride forty-six years before".  She thought that the specimens of E. altensteinii might have grown 25cm ("a foot") during that time, but "that the E. latifrons did not seem to have grown any, although they always had green leaves".  Two or more years may pass between the formation of sets of leaves. 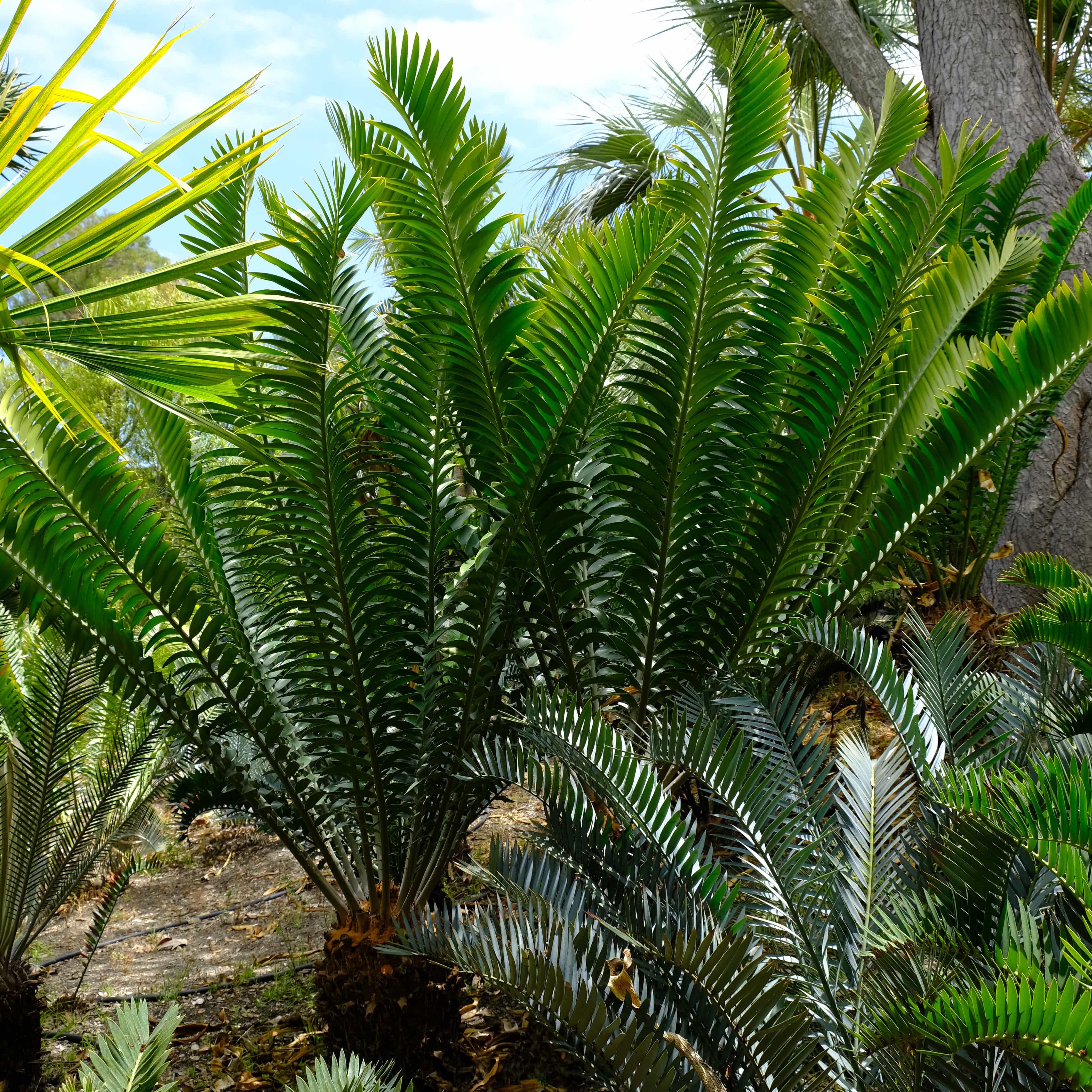 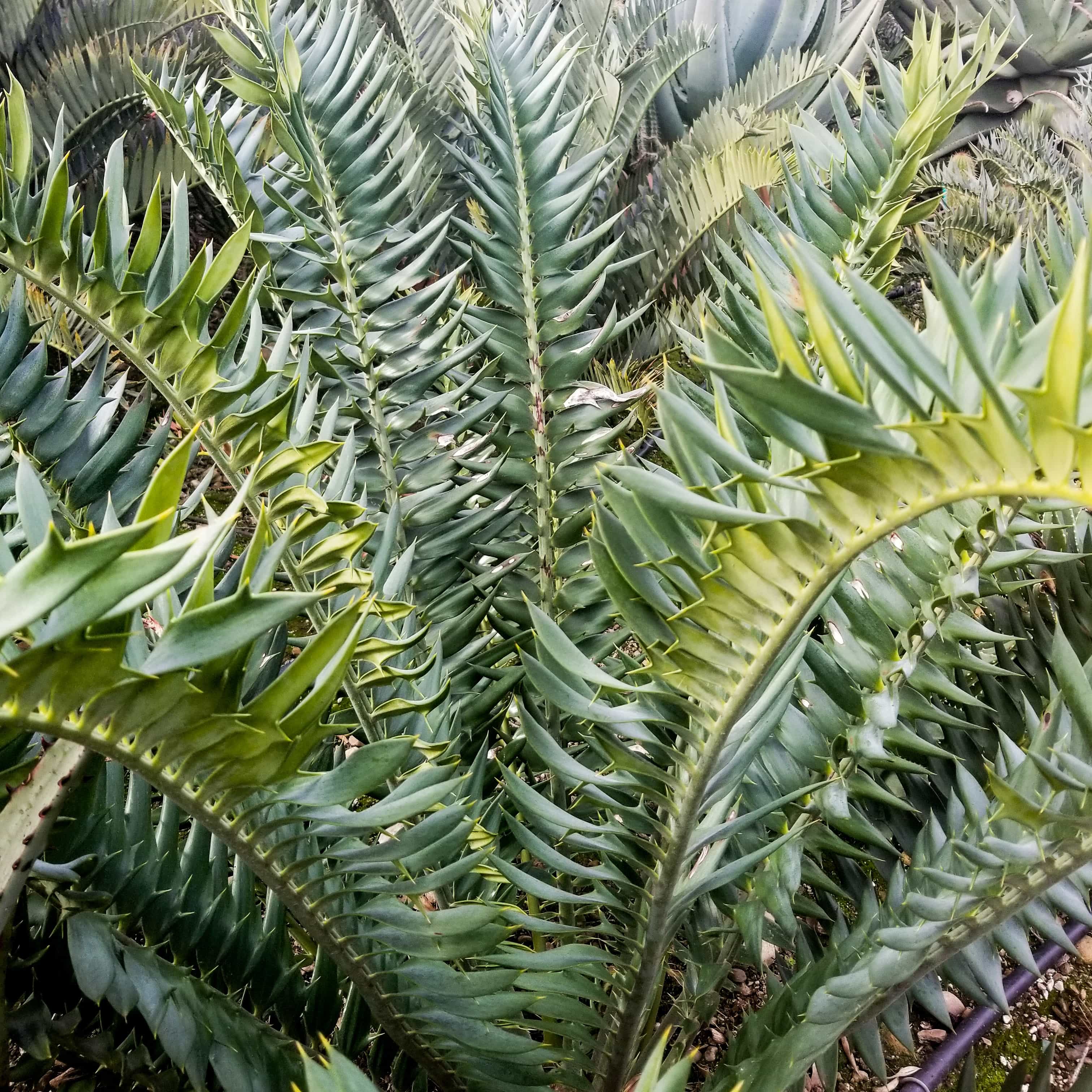 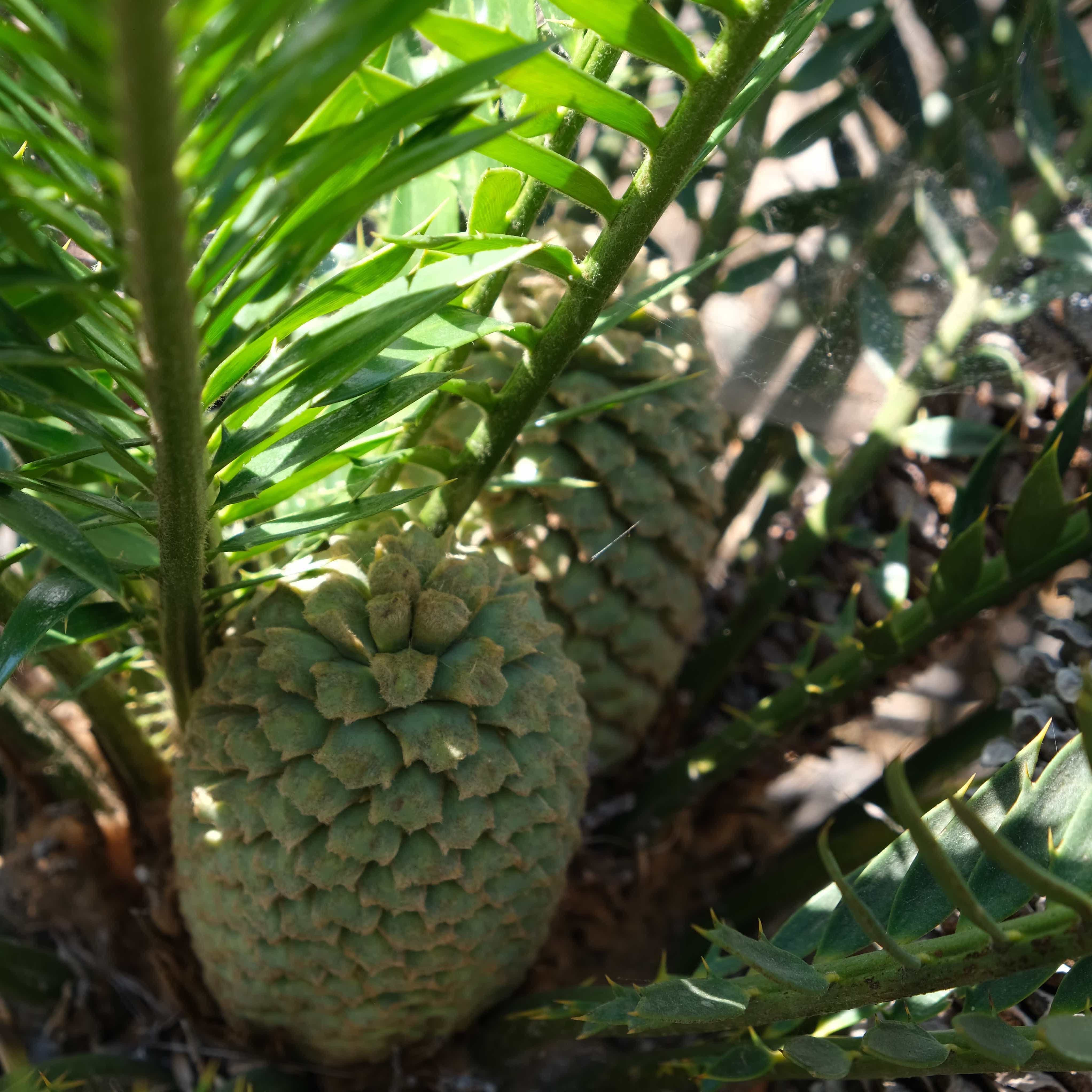