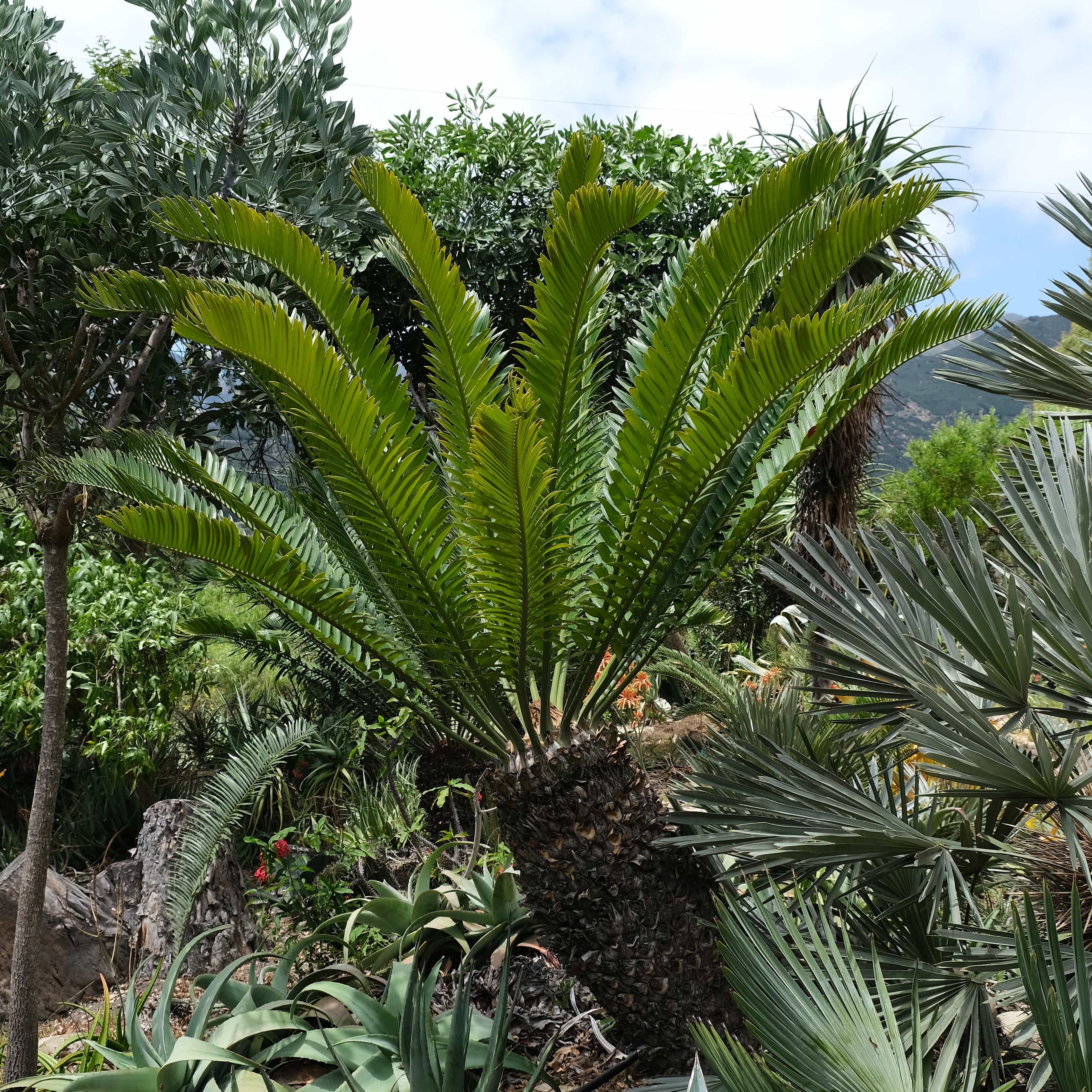 Origin and Habitat: South Africa (Eastern Cape Province to the southern border of Kwazulu-Natal). Encephalartos altensteinii occurs in the coast from Alexandria eastwards through the districts of King William's Town, East London and Umtata to near the Natal border. The total population of E. altensteinii is estimated to be near 10,000 individuals. Subpopulations typically number about 500 plants.
Altitude range: Occurs from near sea level up to 1,970 ft (600 m) above sea level.
Habitat and Ecology: This species occurs in near-coastal sites ranging from open shrubland or grassland and steep rocky hillsides and exposed escarpments to closed evergreen forests in valleys. Plants often occur along river banks and also occur inland at a few sites at higher altitude along the Amatola mountain range. Summer conditions are warm to hot and cool in the winter with rarely any frost occurring. Annual rainfall varies from 34-39 in (875-1,000 mm). E. altensteinii, like all other species in the genus, is pollinated by insects and wind. The Knysna loerie and Trumpeter hornbill are attracted to the disintegrating cones which expose the bright red seeds which are consumed by the birds. The fleshy layer is digested, the hard seed regurgitated, and in this way it is dispersed. Baboons and monkeys also play a part in distributing the seeds; they collect and carry them to the tops of cliffs or trees, rejecting the essential hard kernel and eating only the delicate soft outer coat of the seed. Habitat destruction has been a significant problem in coastal habitats where resort developments in the main estuaries have displaced cycad habitat. The species is threatened by illegal collecting. Large numbers have been removed from areas such as Bushman's River and the Tamara area of the Eastern Cape. 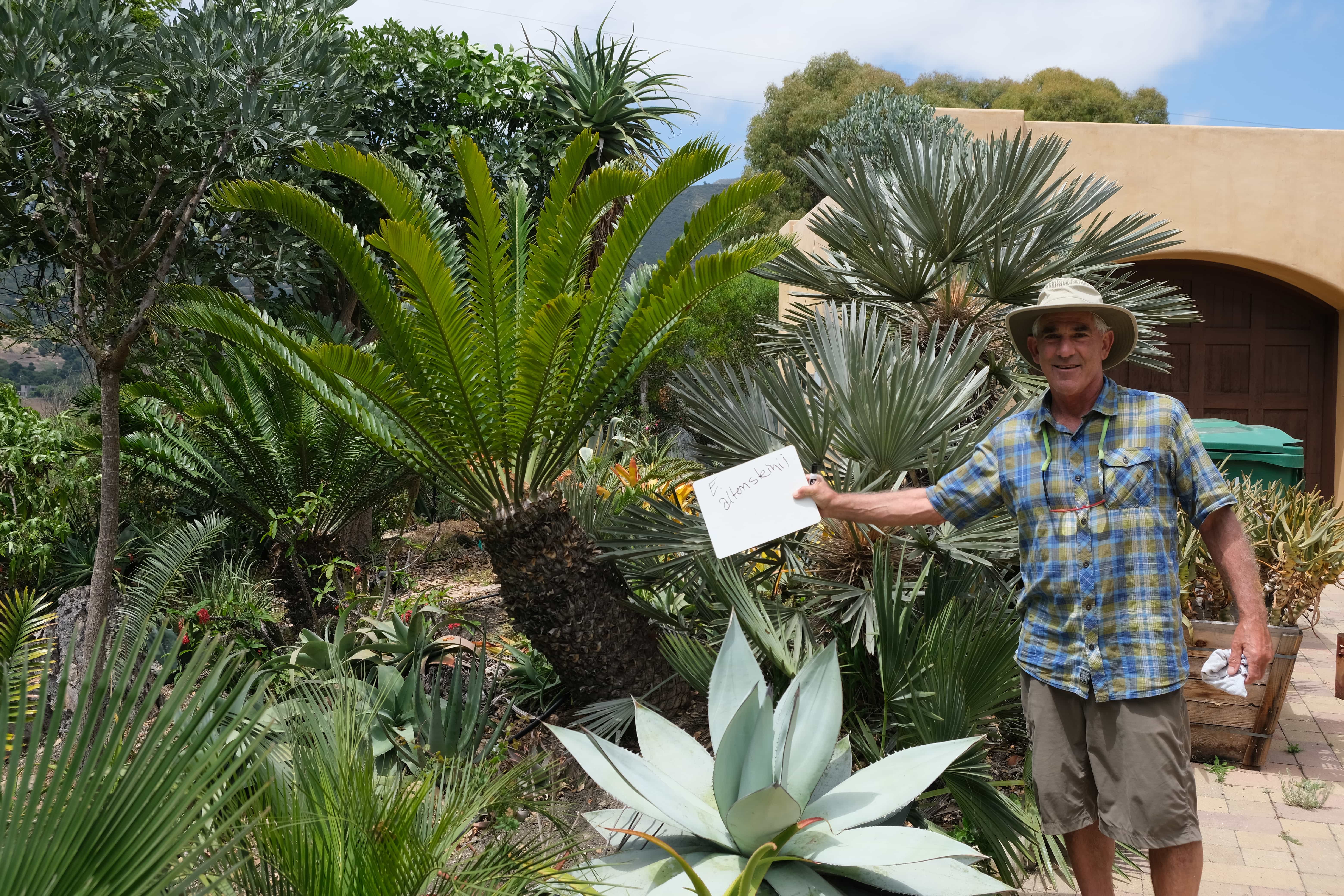 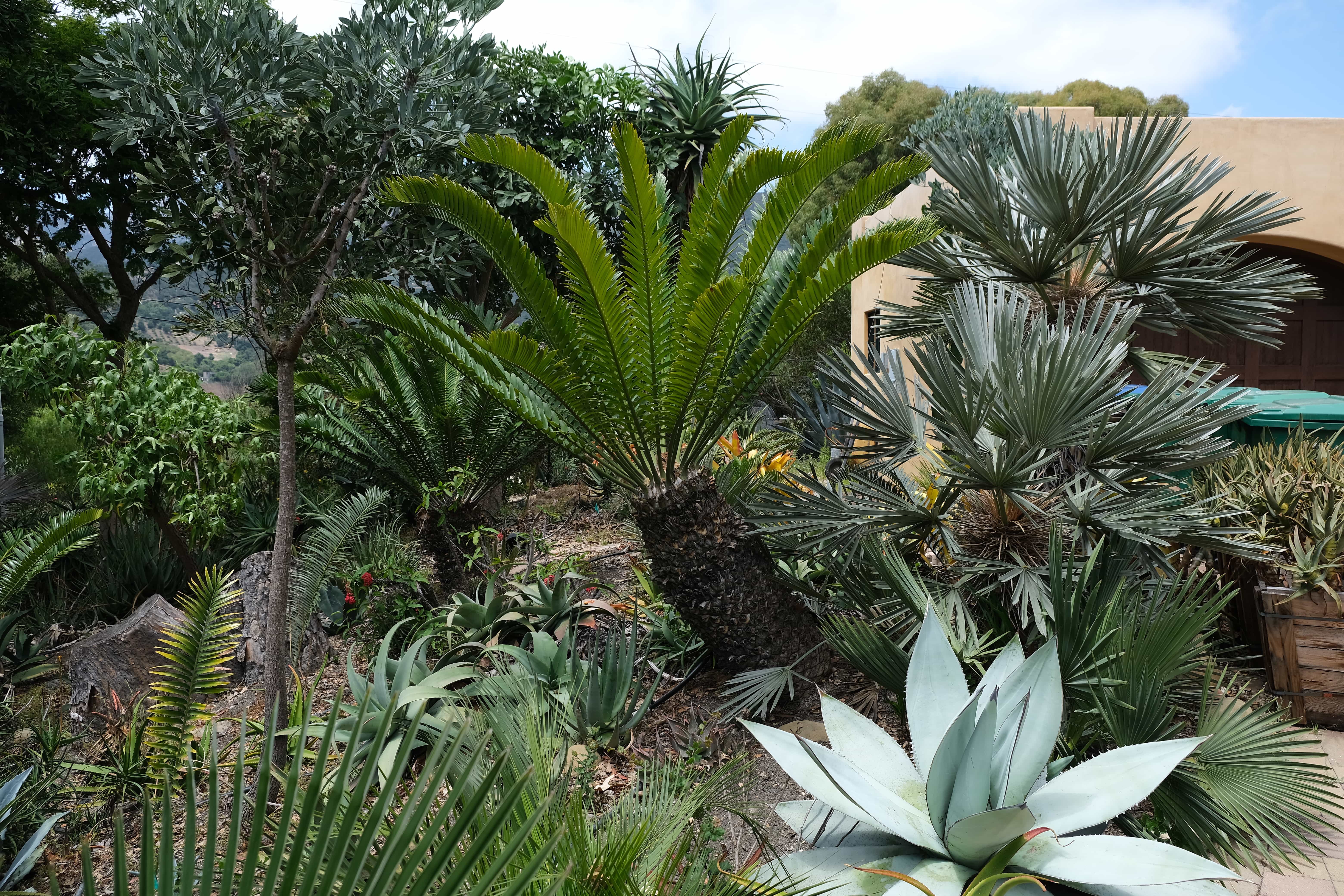 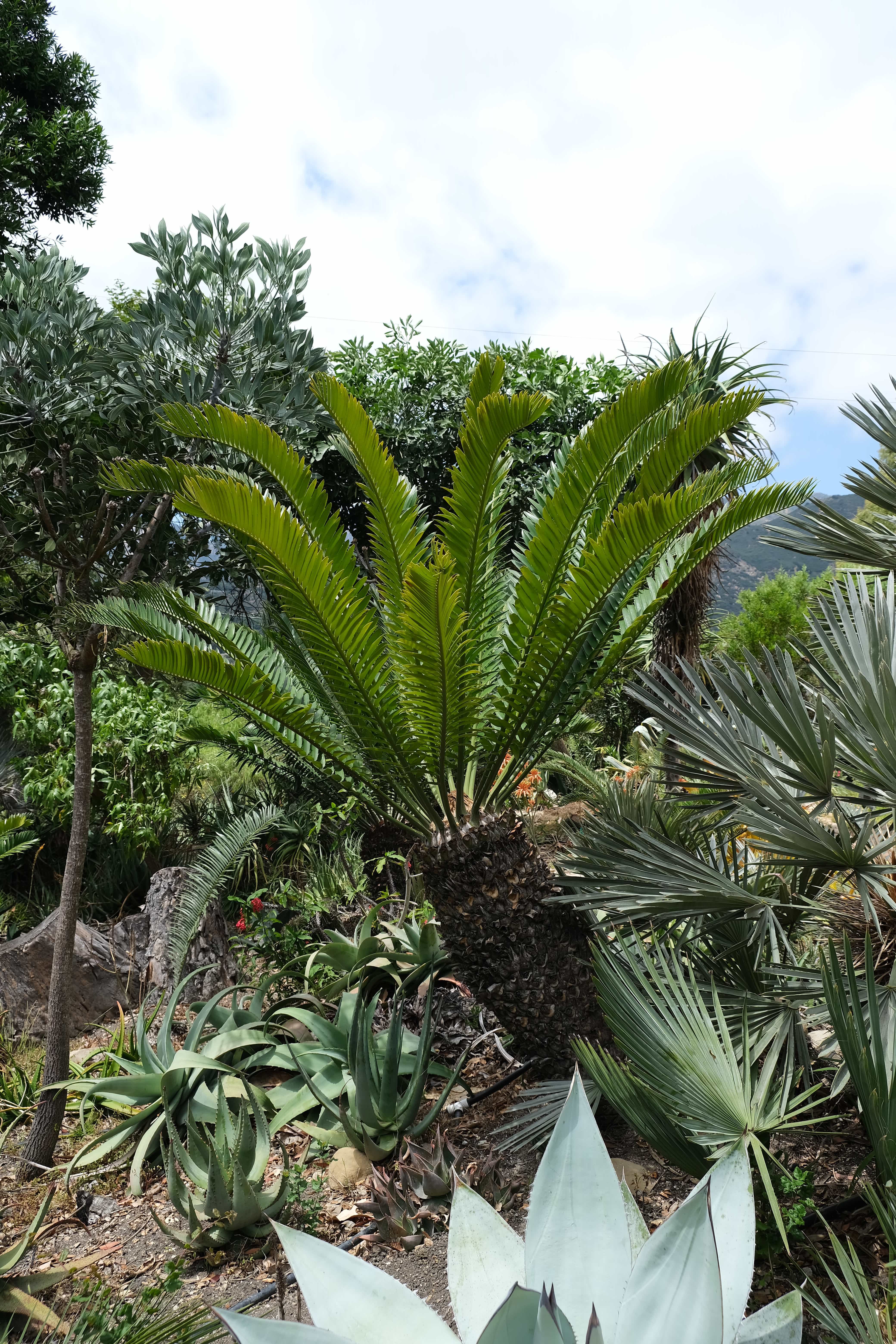 Description: The Eastern Cape giant cycad (Encephalartos altensteinii) is a stout evergreen cycad that developes into a medium to large plant producing initially a single, erect trunk growing up to seven metres tall and may be branched or unbranched. The leaves are straight or curved backwards and up to three metres in length. In full sun the leaves are shorter. A flush of new leaves is produced in the spring but not necessarily every year. The leaflets are rigid and fairly broad with one or both margins toothed. There are no prickles at the base of the leaf which distinguishes it from Encephalartos natalensis. E. altensteinii is a very ornamental garden plant and probably the most common of all the cycads in cultivation. This species is long-lived, is easy to grow and in time develops into large specimens. All cycads are long-lived, and to reproduce, male and female plants need to produce cones at the same time, so that pollen can be transferred to the female cone. They are insect and wind pollinated.
Derivation of name: Named after Baron von Stein zum Altenstein, a German chancellor of the 19th century.
Stem: Erect, up to about 4 m high, rarely up to 7 m and then usually reclining, and about 25-40(-60) cm in circumference. with small amount of wool at apex soon disappearing. Young stem ovoid, somewhat woolly. Some plants will produce suckers at the base of the trunk which in time
Leaves: Green, numerous in crown, nearly straight, 1-2 m long, but in the shade will develop to a length of 2-3 m, young leaves are light green, tomentose on emerence except on upper surface of leaflets and soon glabrescent. Rachis soon glabrous except for pulvinus stiff and nearly straight when in exposed habitat, or curved backwards in shade, glabrous. Leaflets variably rigid, spreading at a wide angle from the rhachis, moderately spaced, very numerous, the largest in the middle, the lower reduced in size but not becoming prickles, all rather broadly linear-oblong, the middle ones about 15 cm long and 2.5 cm broad, , with 1 or 2 or, less frequently, 3–5 teeth on both margins, sometimes on one margin and not the other, in old plants becoming entire or nearly so. Nerves usually inconspicuous. Apex mucronate.
Male cones: 1 to several, shortly pedunculate, yellowish, cylindric, slightly tapered to the base, obtuse or narrowed to apex, about 35-50 cm long and 10-12 cm in diameter; scales beaked-acuminate, with a recurved flattish top. Median scales up to 5 cm long and 3 cm broad with acute lateral ridges; bulla projected into a decurved beak about 1.5 cm long, upper facet with central ridge, lower facet rounded, terminal facet flat or slightly concave, about 1 cm broad and 5-10 mm wide vertically with sparse mixed reddish and white scaly hairs
Female cones: Solitary or occasionally up to 5, sessile, yellowish brown, broadly oblong-ellipsoid, obtuse or narrowed to apex, about 40-55 cm long and 20-28 cm in diameter usually with about 15 spirals of scales, up to about 18 kg in weight. Median scales rhomboid-umbonate 7-8 cm long, 8-9 cm broad, 3.5-4 cm thick with a truncate concave top, very rugose with lateral ridges extending into incurved lateral lacerate lobes about 3 cm long and almost reaching the cone axis. The bulla face deeply wrinkled and 2-3 cm prominent.
Seeds: Scarlet, oblong,angled by compression, about 3.5-4(-5) cm long, 2.2-2.5 cm in diameter, with fleshy beak.
Related species: The species varies somewhat and closely resembles Encephalartos natalensis, but lacks the prickles at the base of the leaf stalk found in the latter, it is also close to Encephalartos lebomboensis. Plants which have not developed aerial stems are often hard to distinguish by their vegetative characters from Encephalartos villosus, which occurs in similar situations. In the latter species, however, the lower leaflets are much reduced and resemble prickles.

Cultivation and Propagation: Encephalartos altensteinii is probably one of the most common of all Encephalartos species in cultivation, of the approximate 65 species in the genus which occur in Africa. It is an adaptable plant well suited to warm temperate and subtropical climates, and can handle light frosts. Because of the eventual size, E. altensteinii is best suited to large gardens where it can be displayed as a feature plant. When young they can be grown as container plants. It can be grown in full sun without its leaves burning. Its color makes it a good subject for the nightscape. Its beauty and ease of horticulture make it one of the finest cycads for use in the garden. It is partially drought tolerant and wind tolerant. As a garden plant, this cycad will usually hold one or two crowns of leaves, all in good condition. As a seedling, it often loses its previous year's leaves before the new leaves emerge. The seedlings need plenty of room for the tap root to develop and require very good drainage. This species transplants easily as a mature plant although it is recommended to remove all of the leaves before doing so, as this makes handling a great deal easier and most important of all, the plant will recover sooner as less moisture is lost. "This is a plant of exceptional vitality. Marloth noted that trunks which had lain in a shed for four years were perfectly capable of growing. When planted they produced new leaves in the next summer" (Palmer & Pitman 1972).
Growth rate: It is a long lived slow growing plant taking 15 to 20 years for one of these to produce a cone, so patience is a must.
Soils: It responds well to deep, fertile, slightly acidic, well drained, soil enriched with compost.
Waterings: In cultivation prefers plenty of water, especially in dry weather for optimal growth. But it is eventually drought resistant. Irrigation systems can be detrimental to cycads, damaging the leaves and stems from the pressure of the water as well as over-watering.
Fertilization: Naturally undemanding for nutrients, it responds very well to regular applications of fertilizer. Growth can be greatly improved through the application of fertilizers. Most growers find that a fertilizer having an even NPK (Nitrogen, Phosphorus, Potassium) balance, and supplemental trace elements, provides a good start for cycads.
Exposure: It will grow in sun or partial shade, however best results are obtained growing the seedlings in full sun.
Hardiness: They do best in a tropical or sub-tropical climate and should be kept totally dry in winter at or around 50°F (10°C) but demonstrate a remarkable degree of cold resistance and may tolerate light frost for short periods if dry, however heavy frosts would probably be fatal.
Uses: In South Africa these plants were known as the bread tree, as the local natives (Hottentots) would remove the pith from the stem, bury it in the earth to rot, then knead it, make it into a cake and bake it in the embers of a fire. Sections of the protective layer of the trunk of the plant formed by retained old leaf bases, are harvested for use as medicine ("muti"). These plant parts are considered to have mystical powers.
The greatest use of E. altensteinii today is in horticulture where it is used extensively in gardens and as a container plant when young. It is very ornamental.
Propagation: Plants are not readily available from nurseries, however they are also easy to propagate from seeds. They can also be propagated from suckers with some patience and experience. 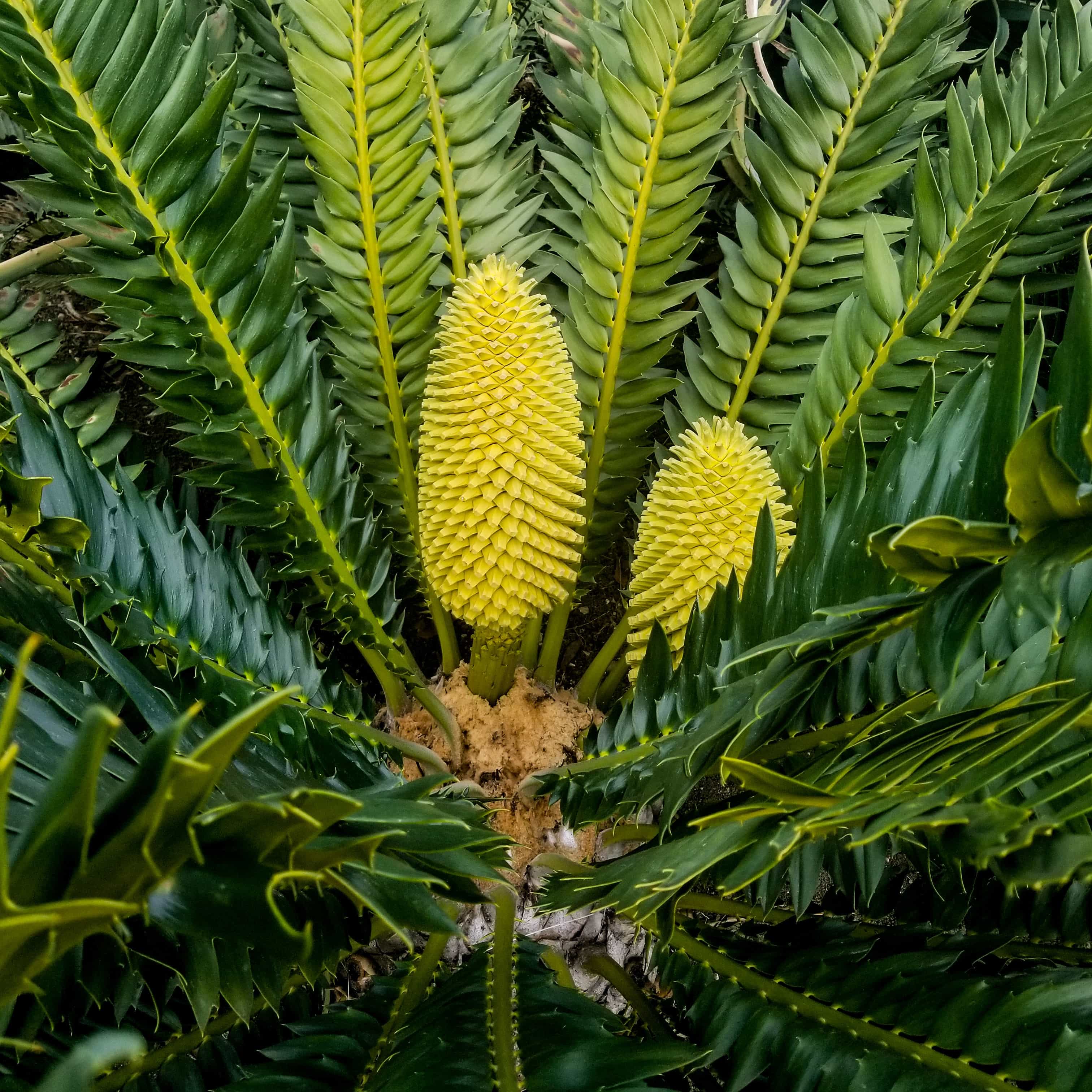 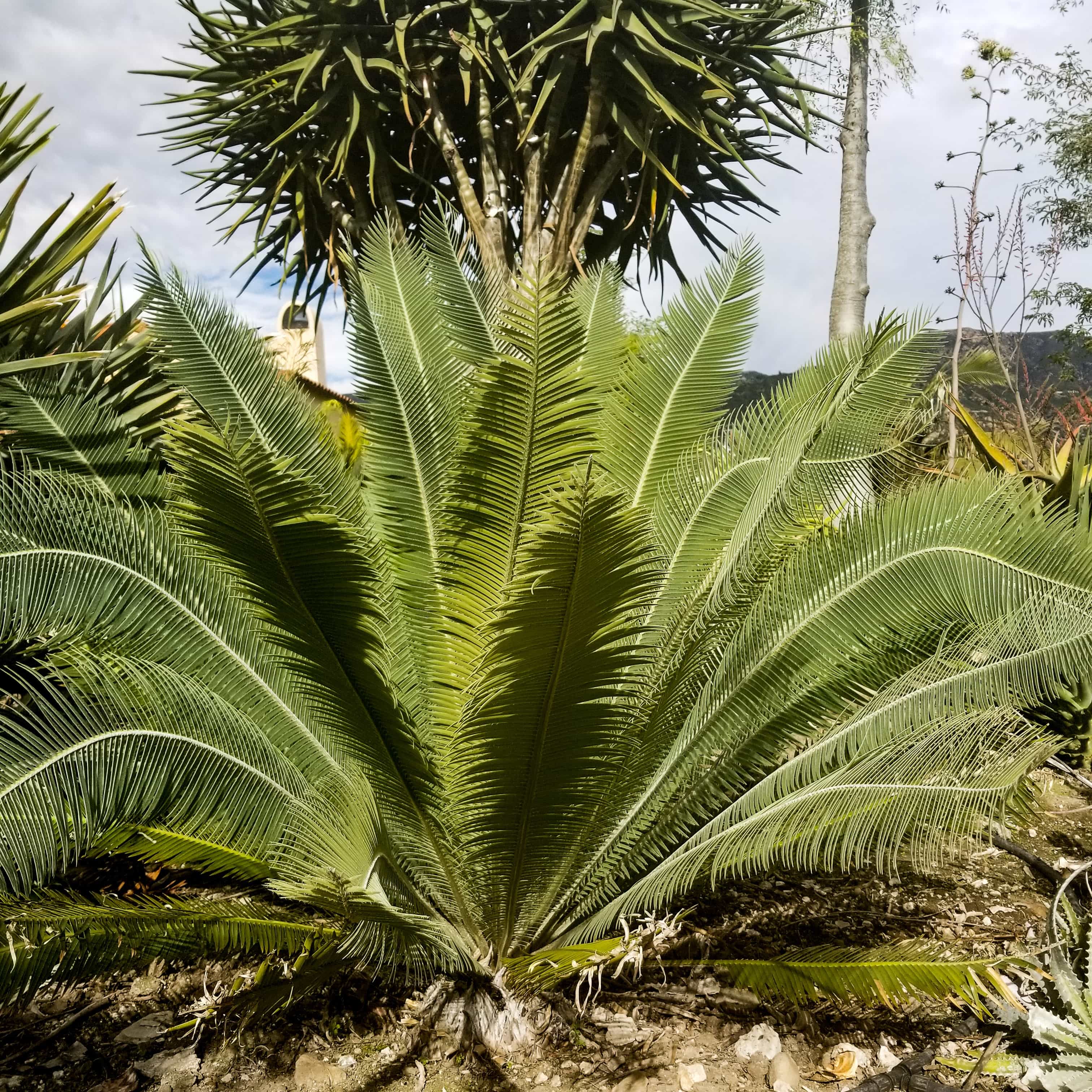 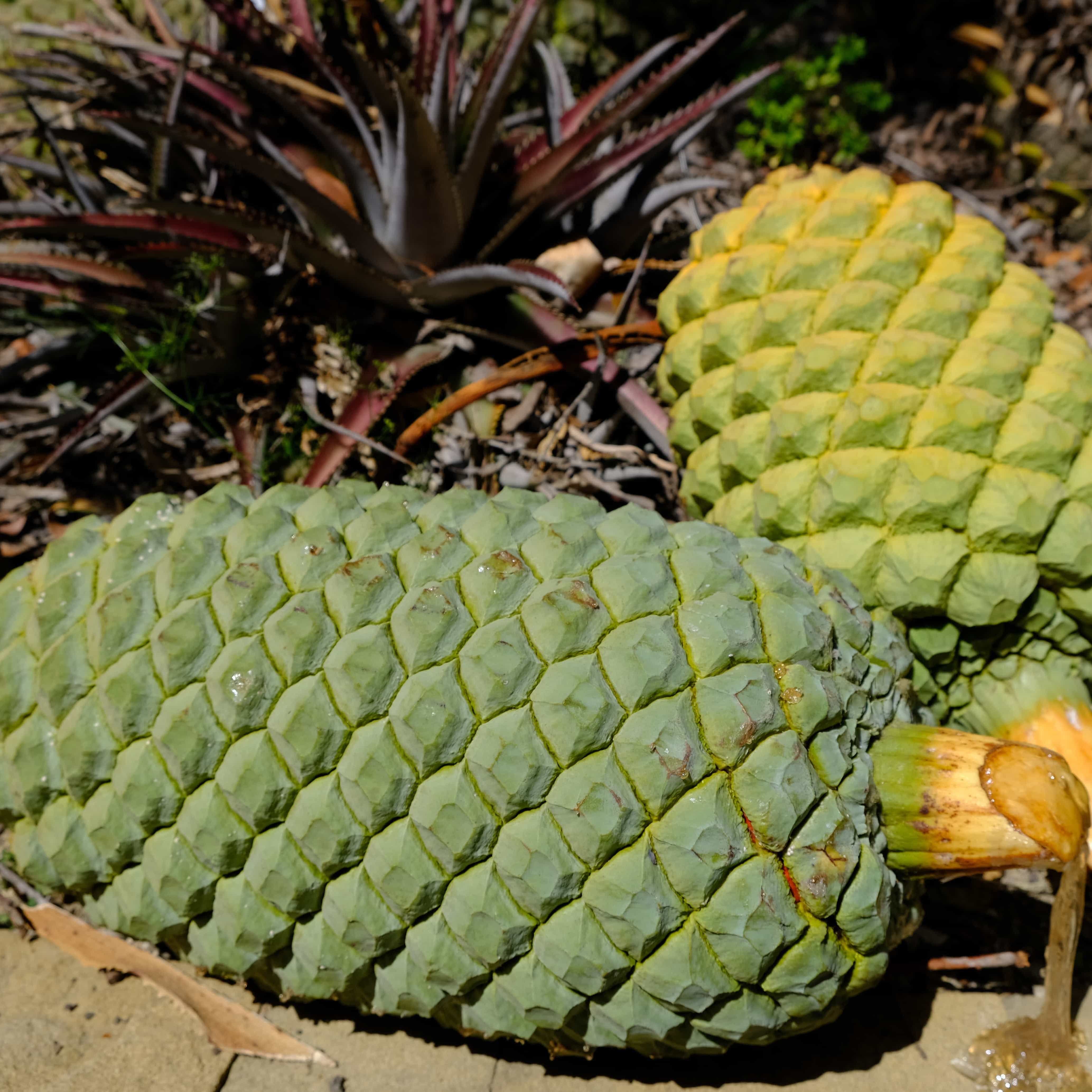