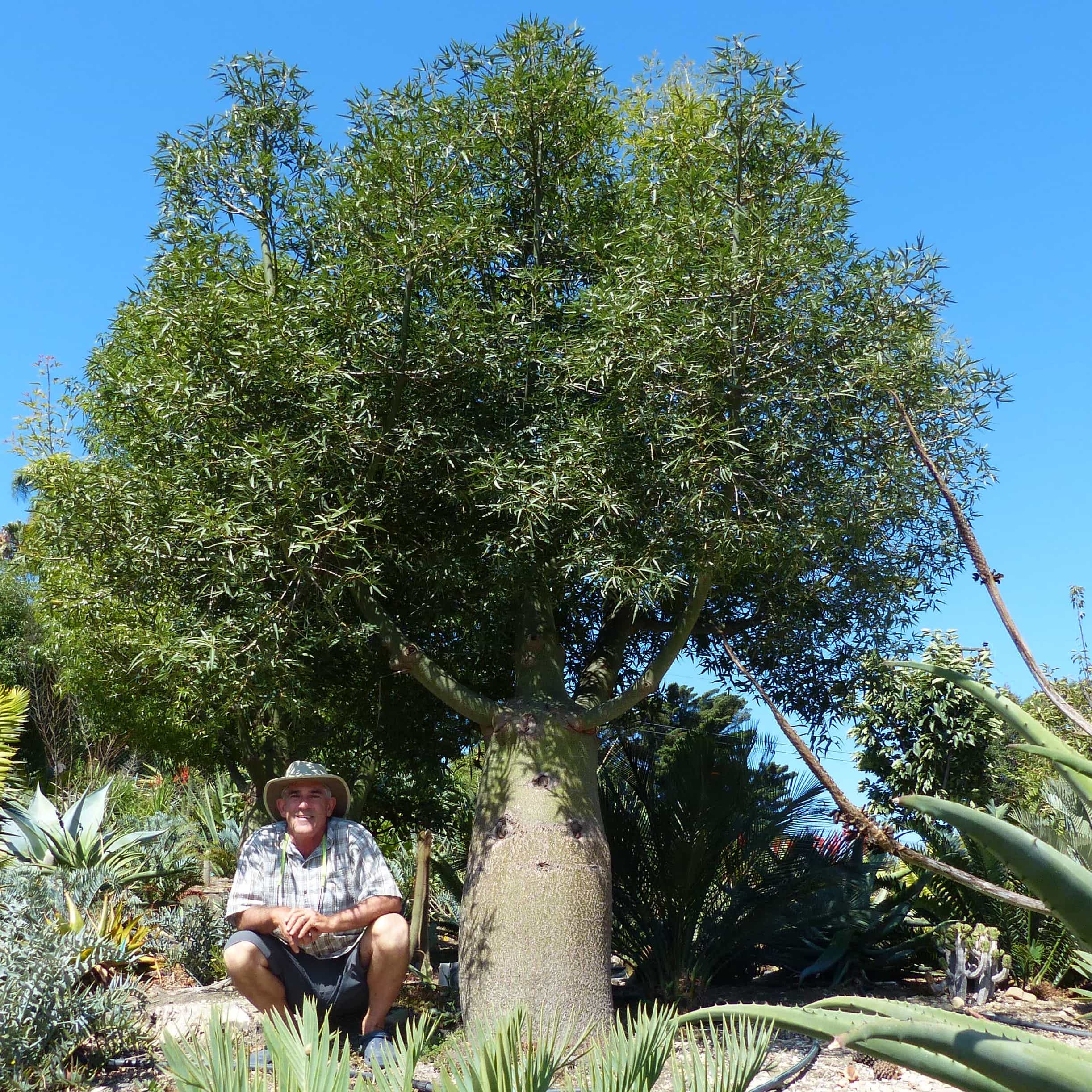 Brachychiton rupestris, commonly known as the narrow-leaved bottle tree or Queensland bottle tree, is a tree in the family Malvaceae that is native to Queensland, Australia. Discovered and described by Sir Thomas Mitchell and John Lindley in 1848, it gained its name from its bulbous trunk, which can be up to 11 ft (3.5 m). Reaching 33-82 ft (10–25 m) high, the Queensland bottle tree is deciduous, losing its leaves between September and December. The leaves are simple or divided, with one or more narrow leaf blades up to 4 in (11 cm) long and 0.8 in (2 cm) wide. Cream-colored flowers appear from September to November, and are followed by woody boat-shaped follicles that ripen from November to May. No subspecies are recognised.

As a drought-deciduous succulent tree, B. rupestris adapts readily to cultivation and is tolerant of a range of soils and temperatures. It is a key component and emergent tree in the endangered central semi-evergreen vine thickets—also known as bottletree scrub—of the Queensland Brigalow Belt. Remnant trees are often left by farmers on cleared land for their value as shade and fodder trees. 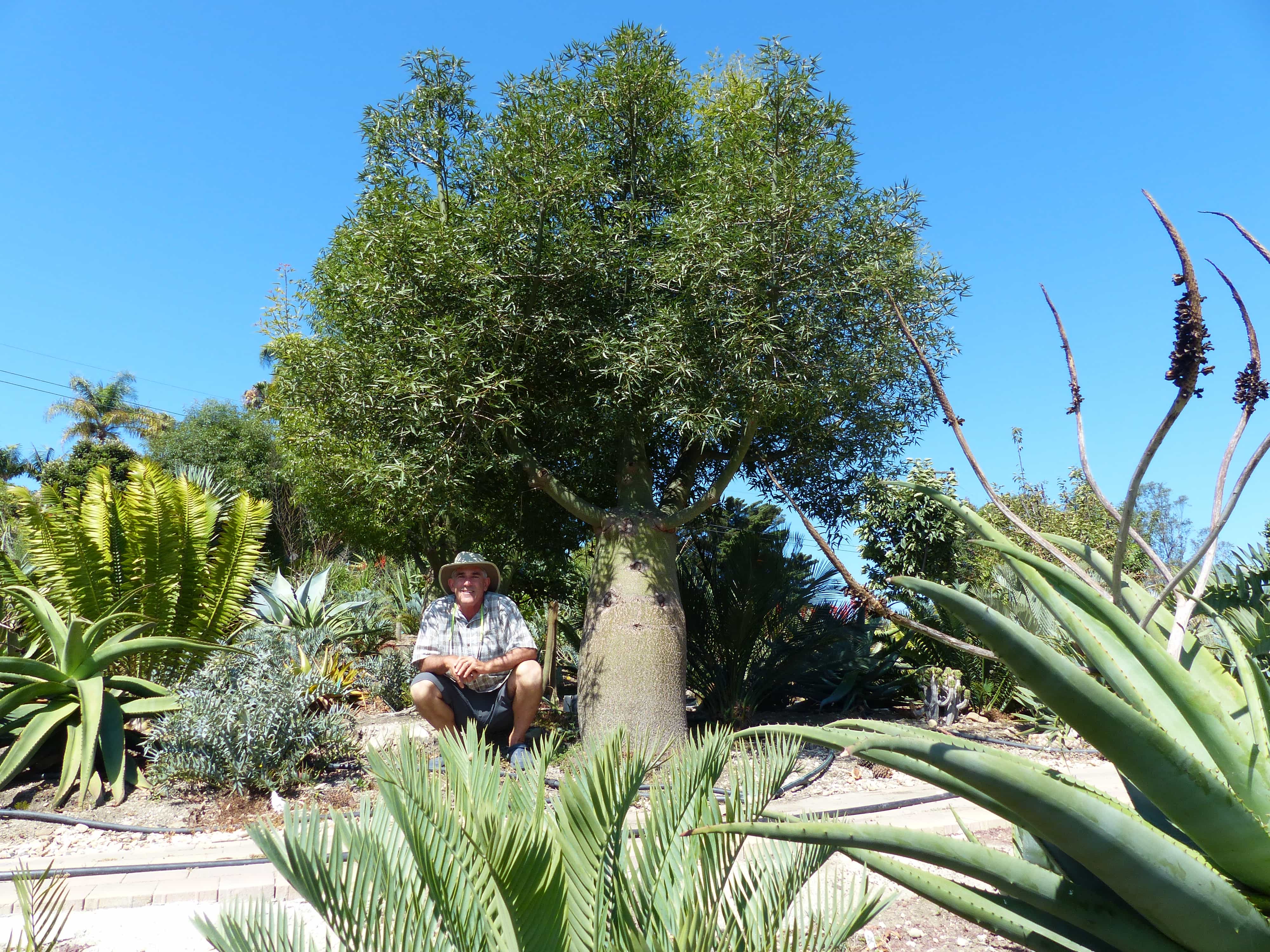 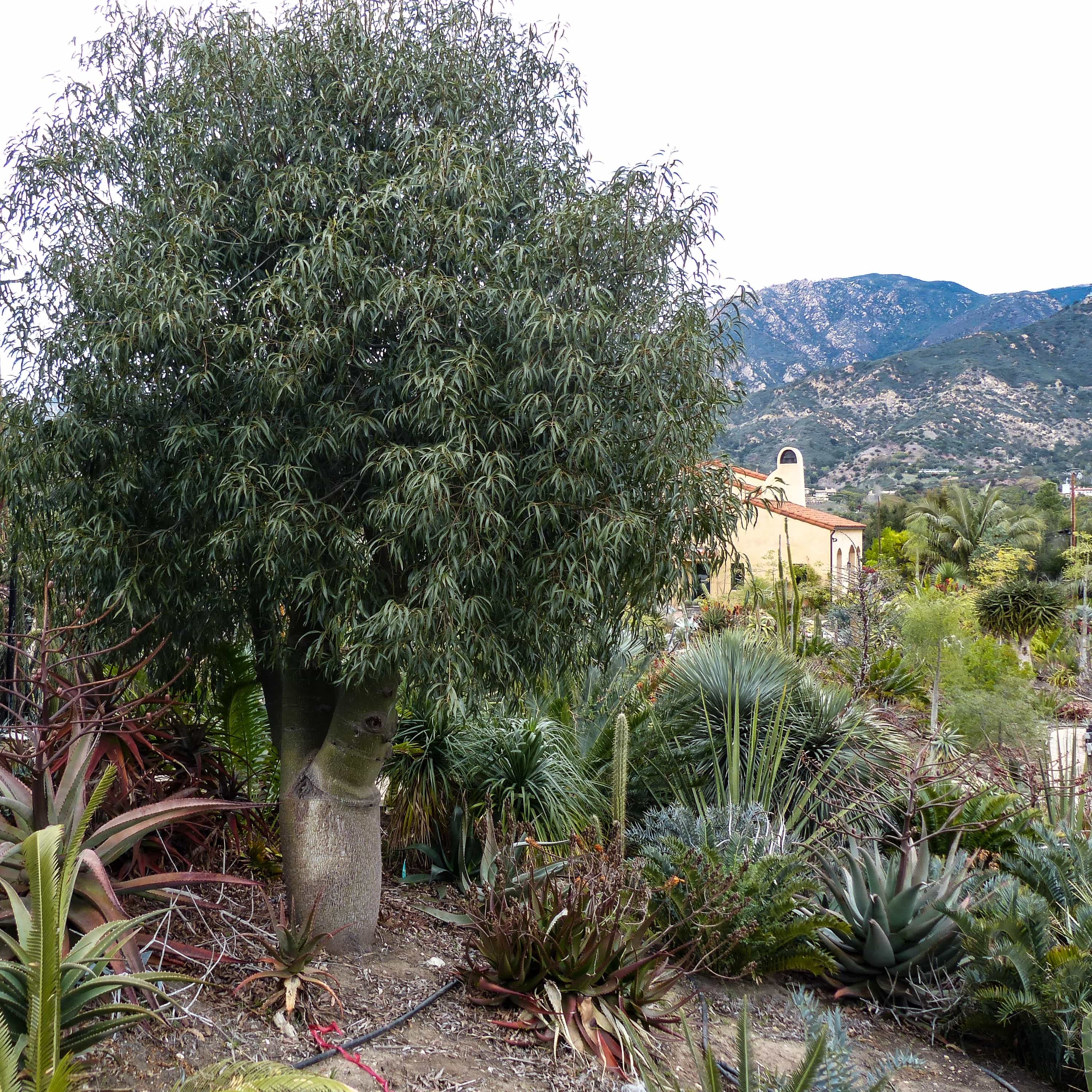 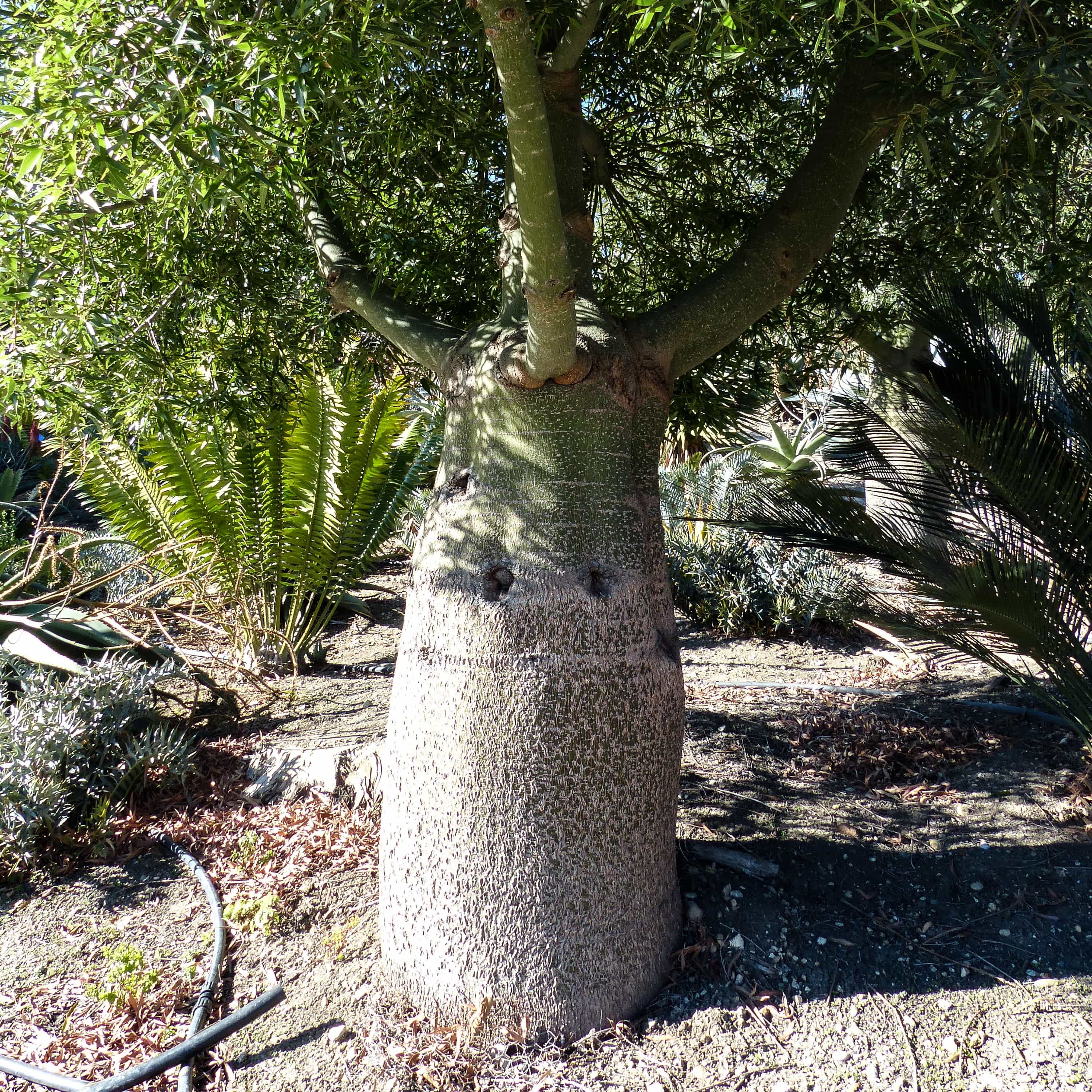 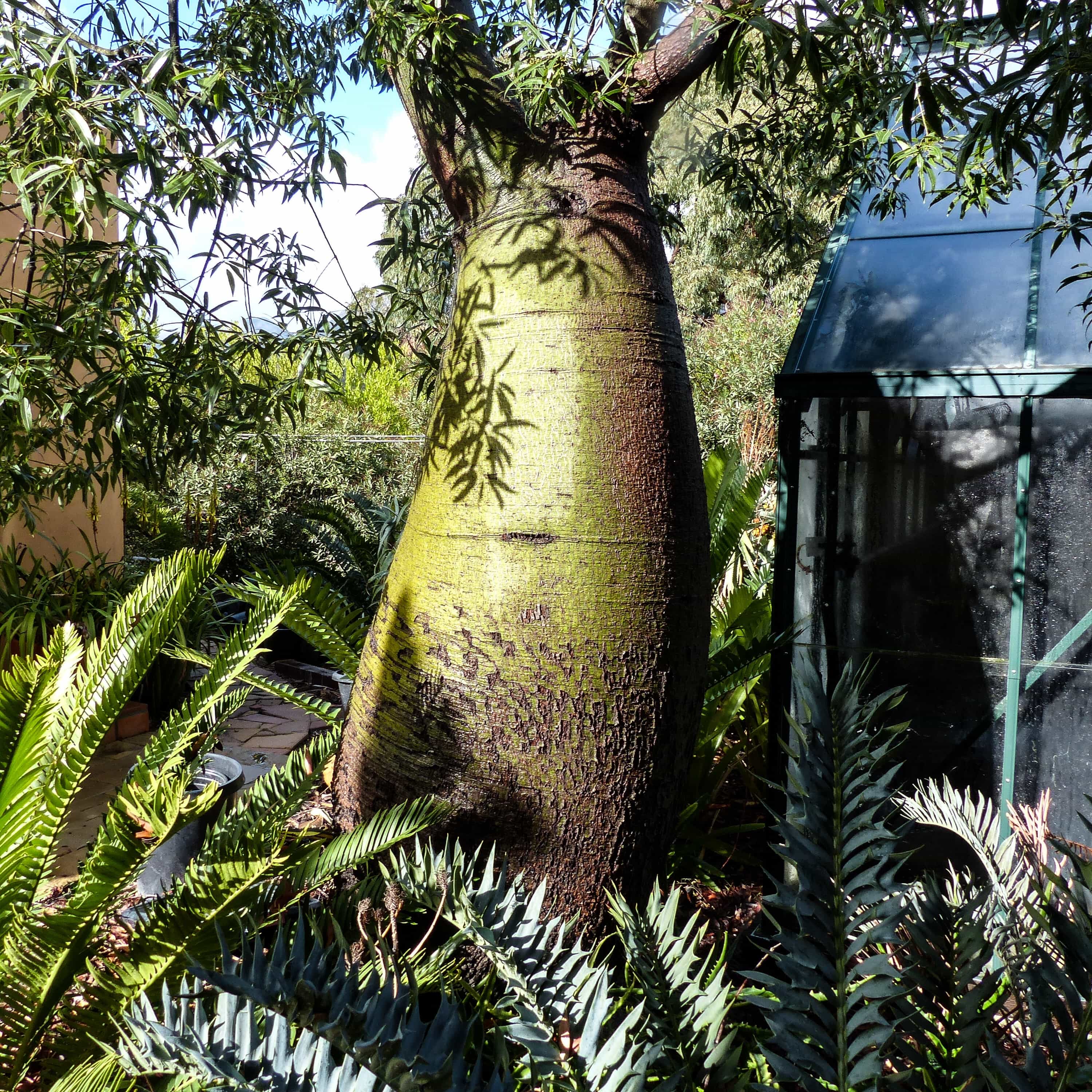 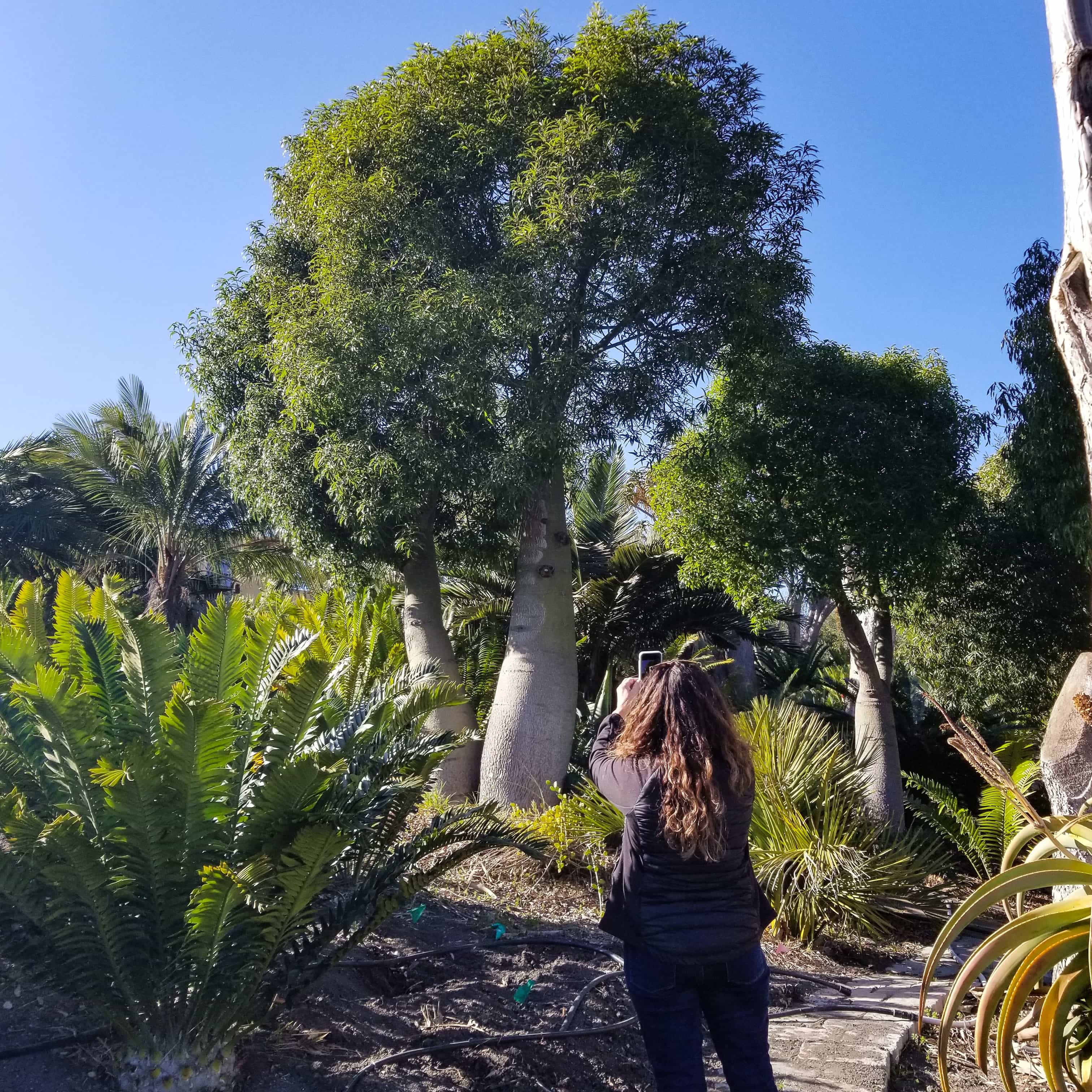 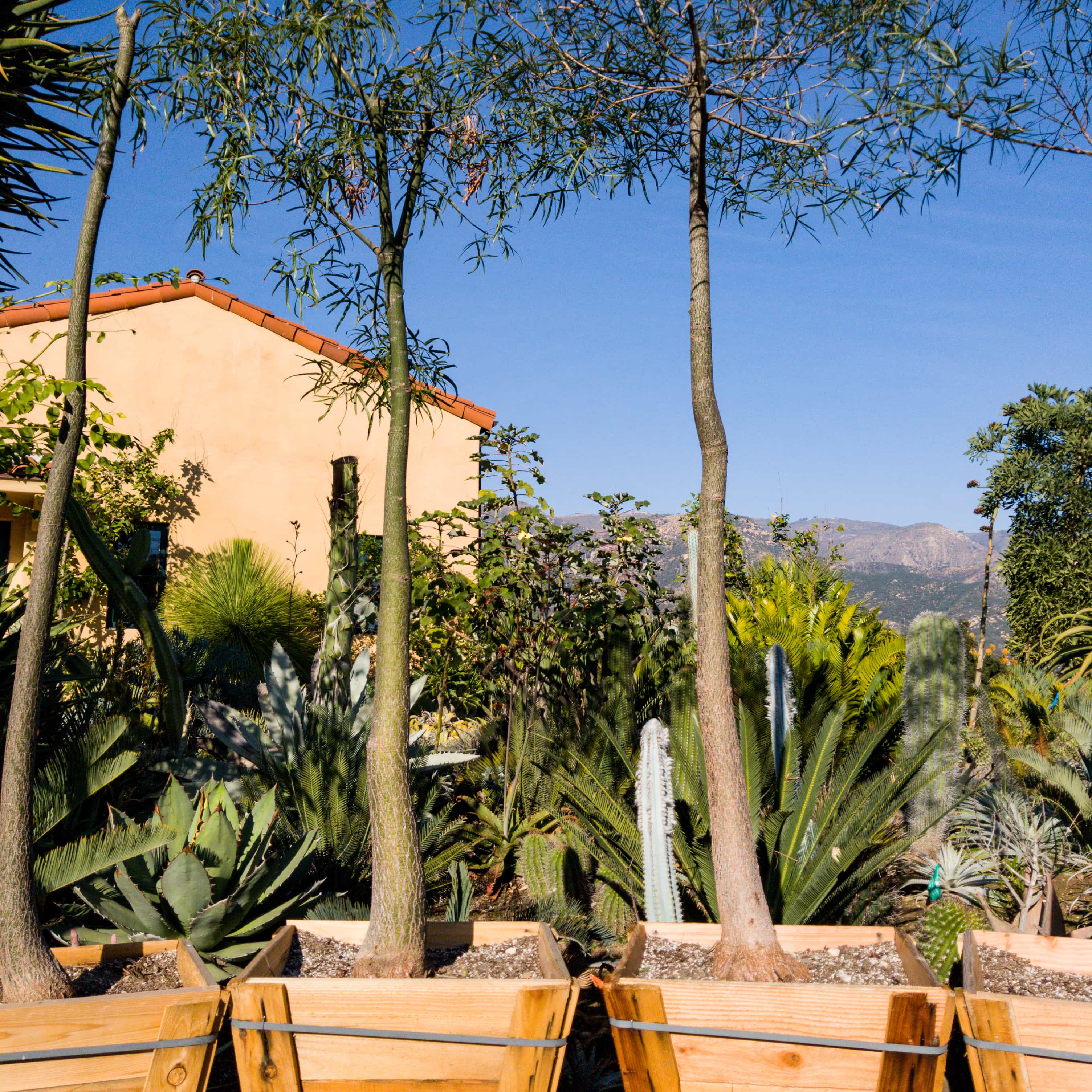 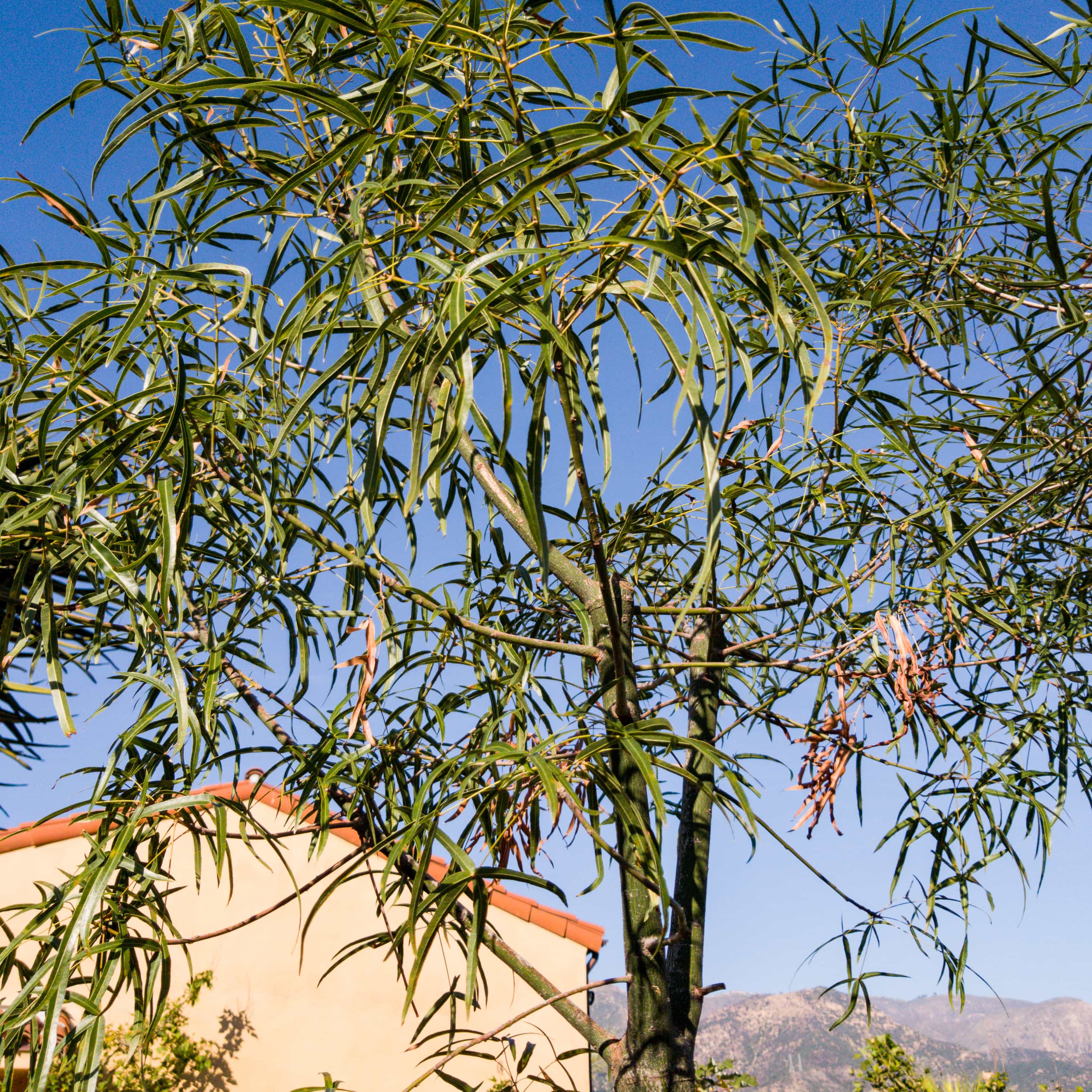 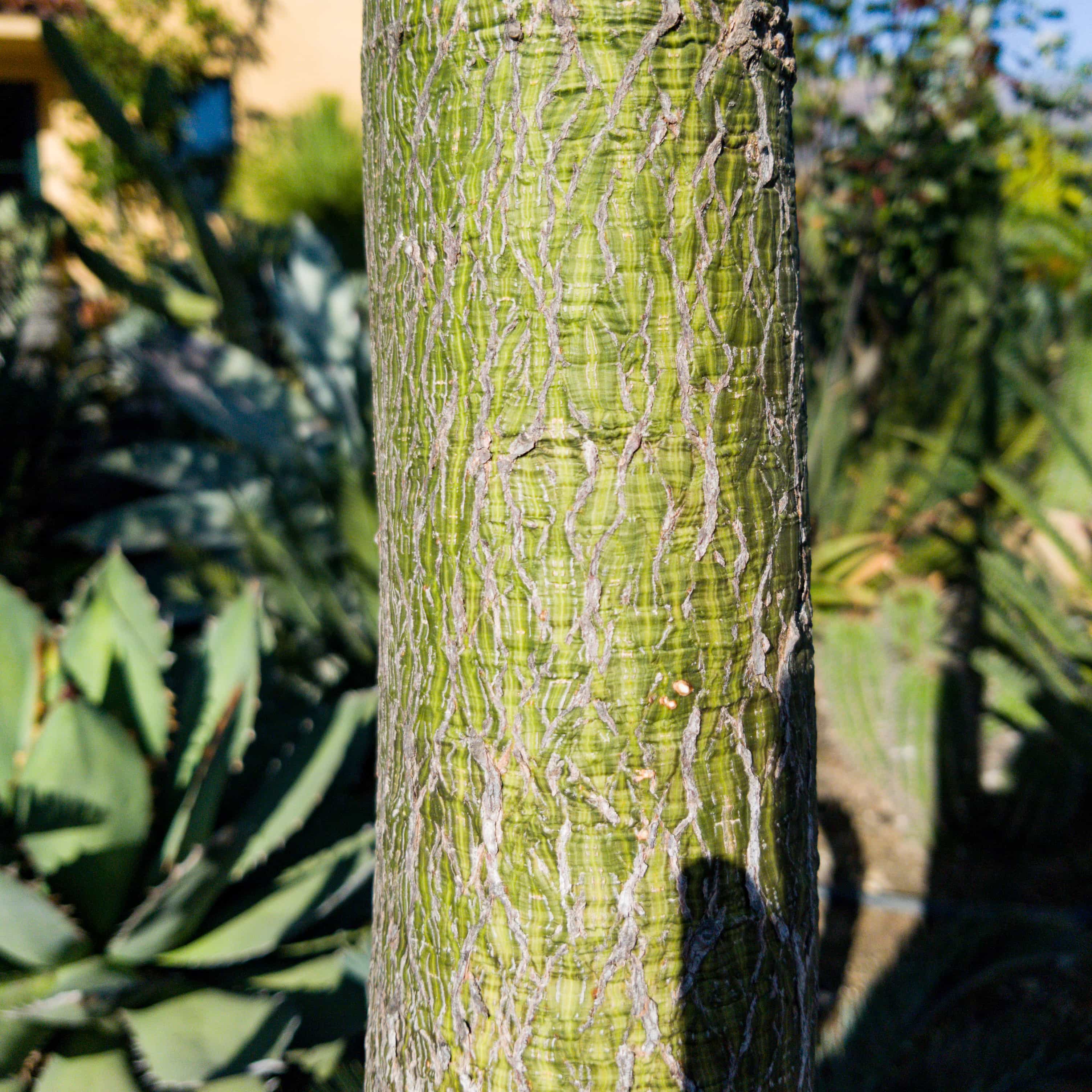 Brachychiton rupestris grows as a succulent tree reaching 10–20 metres (33–66 ft) (rarely 25 metres (82 ft)) in height,[3] though plants in cultivation are usually shorter.[4] The thick trunk is 5–15 metres (16–49 ft) tall, with a 1–3.5 metres (3.3–11.5 ft) diameter at breast height (DBH). It has dark grey bark and is marked by shallow tessellation and deeper fissures. Smaller branches are light green or grey, as are the trunks of immature trees. Like those of all members of the genus, the leaves are alternately arranged along the stems.[3]

B. rupestris is deciduous. Trees in their native habitat are typically leafless between September and December; the timing, duration and extent of leaf drop may be affected by extremes of rainfall or drought.[3] Sometimes trees shed leaves from only some branches.[5] On every tree, the leaves vary in shape, ranging from narrow and elliptic to deeply divided.[6] The upper surface is glossy, contrasting with a pale undersurface. The adult leaf blades are 4–11 centimetres (1.6–4.3 in) long and 0.8–2 centimetres (0.3–0.8 in) wide with pointed (acuminate or apiculate) tips. They have a raised midrib on the upper and lower surface, with 12–25 pairs of lateral veins that are more prominent on the upper surface, arising at 50–60 degrees from the midrib. The compound juvenile leaves have 3–9 spear-shaped (lanceolate) or linear lobes. These each measure 4–14 centimetres (1.6–5.5 in) long and 0.3–1 centimetre (0.1–0.4 in) wide.[3]

Panicles of creamy-yellow flowers with red markings[6] appear from September to November in the species' native range. These arise from axillary buds on end branches. Each panicle contains 10–30 flowers and is 3–8 centimetres (1.2–3.1 in) long, and each flower is 0.5–1 centimetre (0.2–0.4 in) long and 1.3–1.8 centimetres (0.5–0.7 in) wide. The length of the lobes of the perianth is more than half the perianth diameter.[3] Like all Brachychiton species, B. rupestris is monoecious—each plant has distinct male and female flowers.[3] Male flowers have 15 stamens, with pale yellow anthers, while female flowers have cream or white stigmas surrounded by rudimentary stellate (star-shaped) carpels, which sit atop the ovaries.[3]

Groups of 3 to 5 woody boat-shaped follicles,[6] each containing 4 to 8 (or occasionally up to 12) seeds, develop from November to May. The follicles, smooth on the outer surface and hairy inside, split along their length to reveal seeds. The seeds, which are ovoid with a smooth surface, and 6–7 millimetres (0.24–0.28 in) long by 3.5–4.5 millimetres (0.14–0.18 in) wide, are covered by a hairy coating known as the exotesta.[3]

The closely related Proserpine bottle tree (Brachychiton compactus) that occurs only in the vicinity of the town of Proserpine can be distinguished by its more oval leaves, more compact flower heads, and longer ellipsoid follicles.[7] The undescribed Ormeau bottle tree has brighter lime-green new foliage and leaves but is otherwise similar to the Proserpine bottle tree.[8]

Bottle trees are commonly found planted in streets and parks, on farms, and as features in gardens. An avenue in Roma, Queensland, was planted between 1918 and 1920, each tree representing one of 93 local men killed in World War I.[38] The species has been cultivated as an indoor plant and a bonsai subject.[39][40]

Bottle trees grow best in well-drained, slightly acidic soil, in full sunshine. They are suited to cultivation in regional climates equivalent to USDA hardiness zones 9 to 12.[41] In the first stages of growth, the bottle tree is very slow-growing, and the formation of the unique bottle shape is not visible until the tree is about 5 to 8 years old.[42] Mature trees transplant easily, and can withstand intervals of up to three months between digging and replanting without detriment.[4] Bottle trees grown from seed may take up to 20 years to flower. Flowering takes place after adult leaves have appeared.[43]

Plants are readily propagated from seed. As seed is surrounded by irritating hairs within the pod, extraction requires care.[4] Stem cuttings of semi-mature growth can be taken in late summer and require the application of rooting hormones and bottom heat.[44] 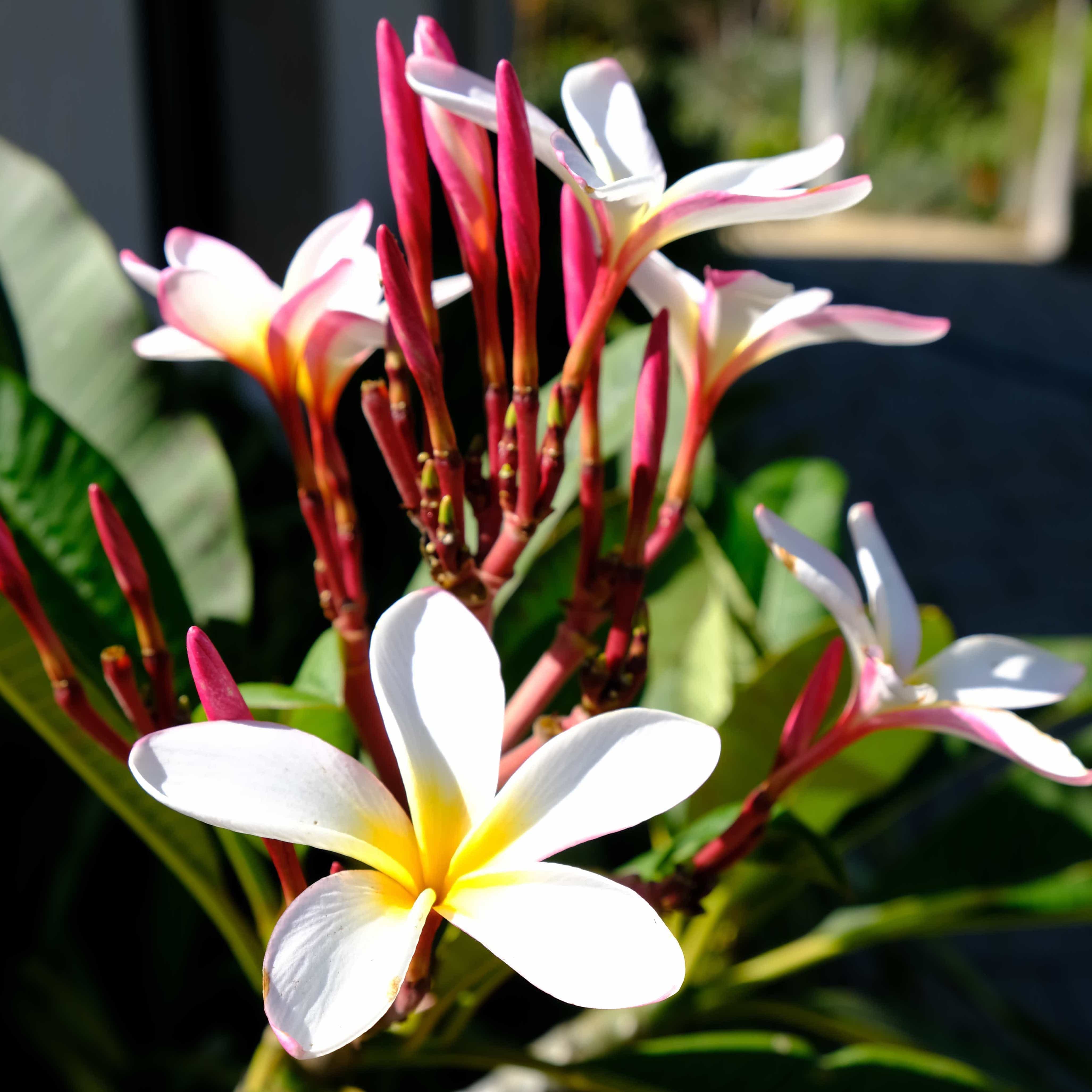 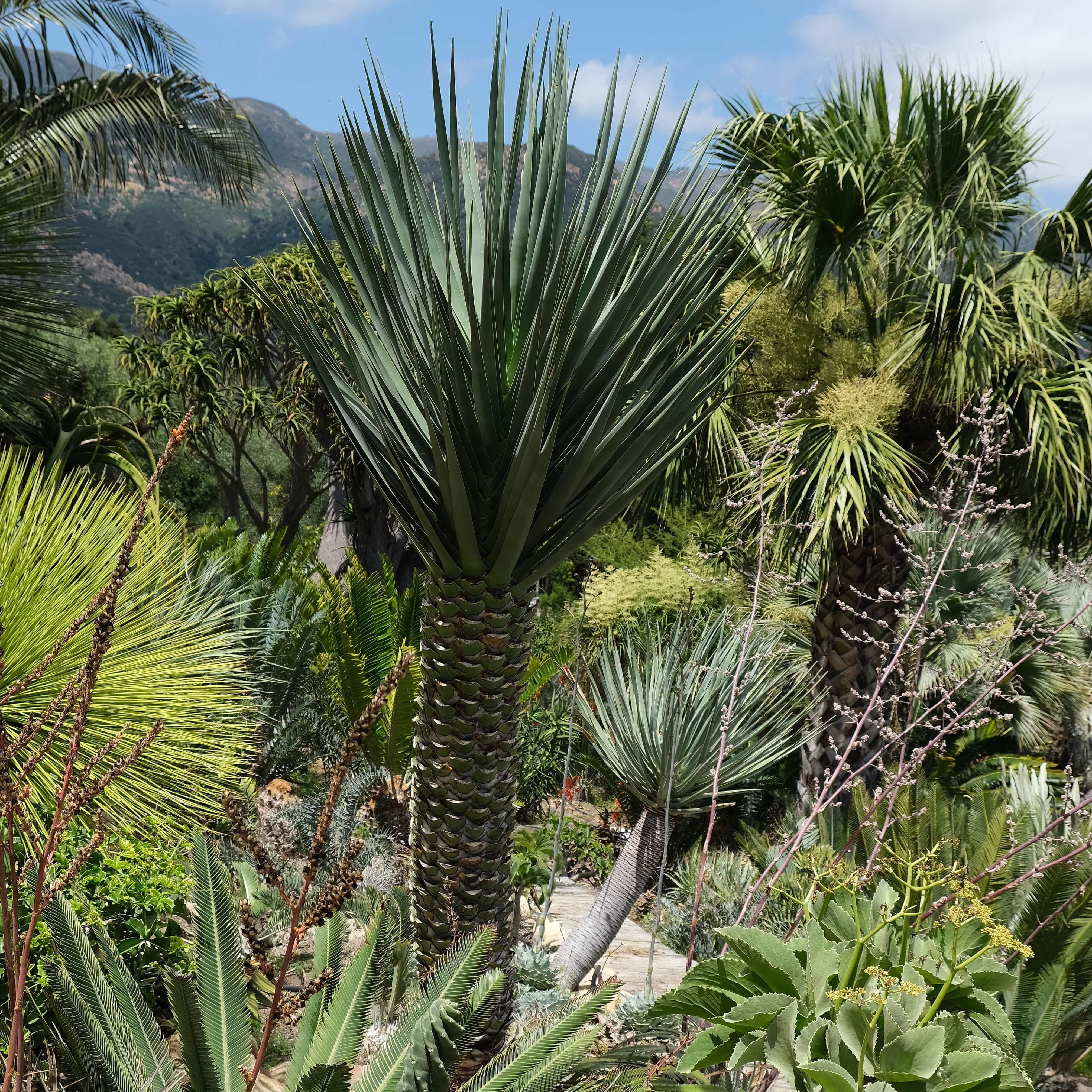 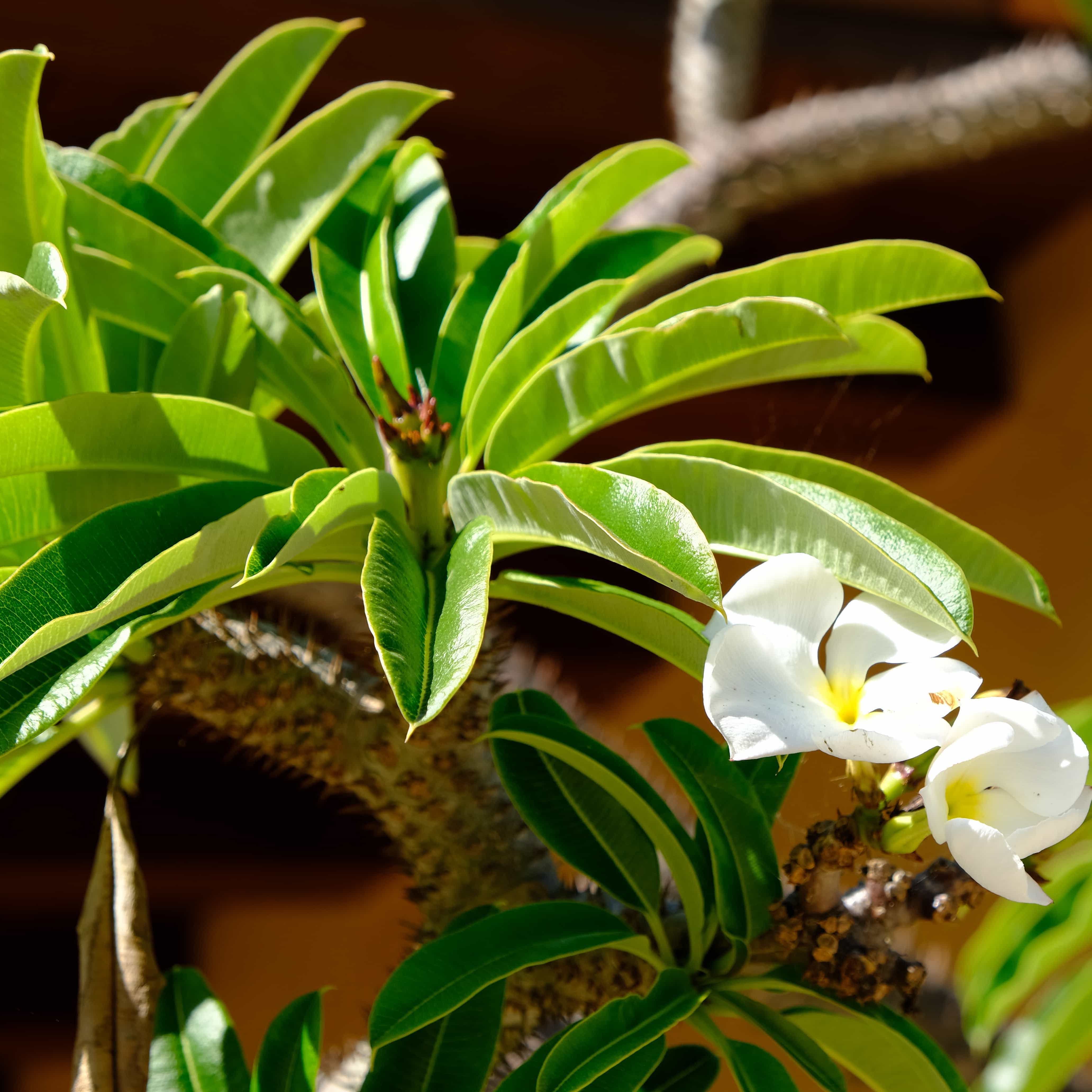