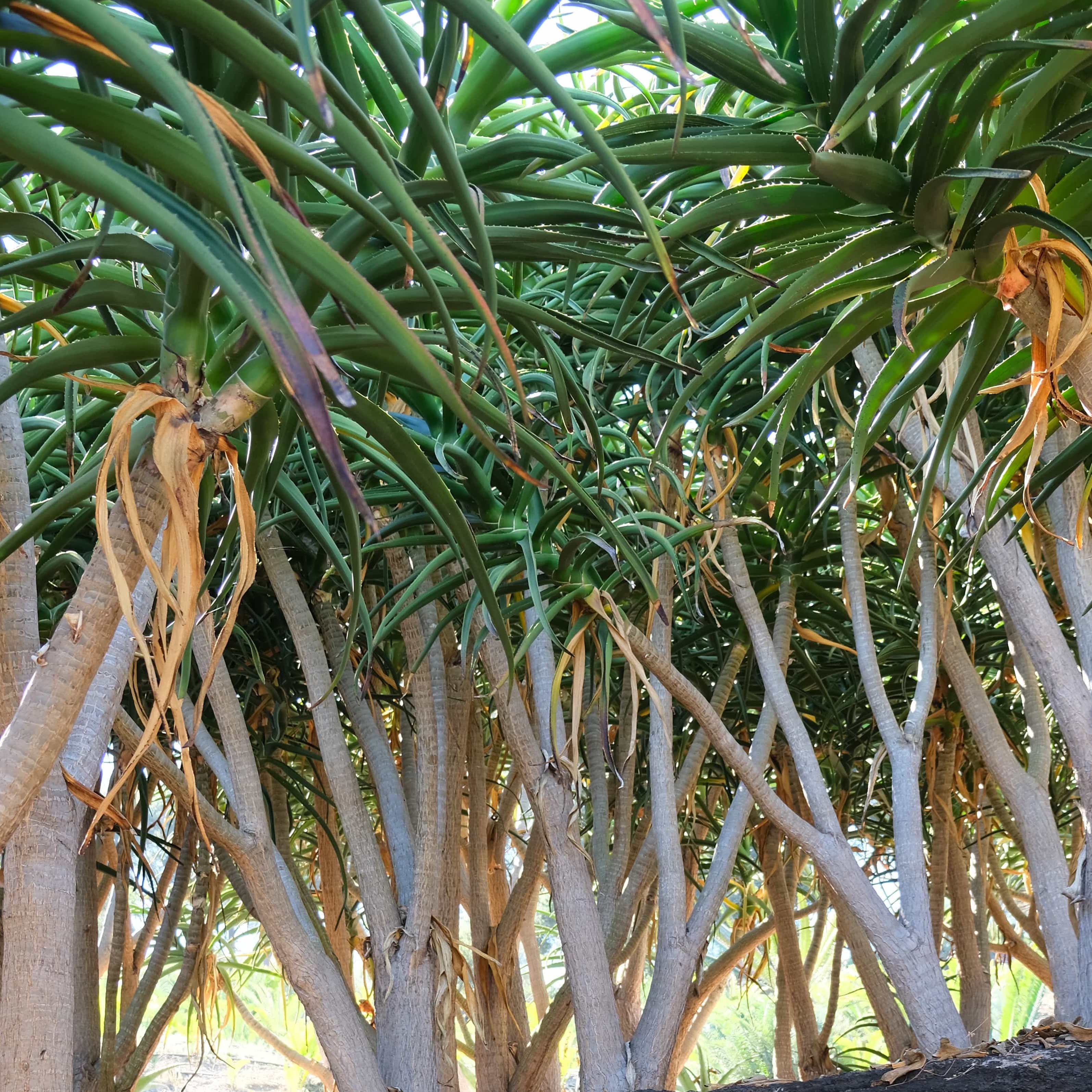 Origin and Habitat: Eastern Cape through the former Transkei, KwaZulu-Natal, Swaziland and Mpumalanga; and northwards to Mozambique and East Africa.
Habitat: It occurs in wooded ravines in subtropical coastal forests and dry valleys in the summer rainfall eastern regions of southern Africa. The climate is mild and rainfall is at least 3.3-4.9 ft (1,000-1,500 mm) per annum and with little or no frost. The seeds often germinate in the shade of mother plants and eventually outgrow them. The soil is usually a loam and humus rich. 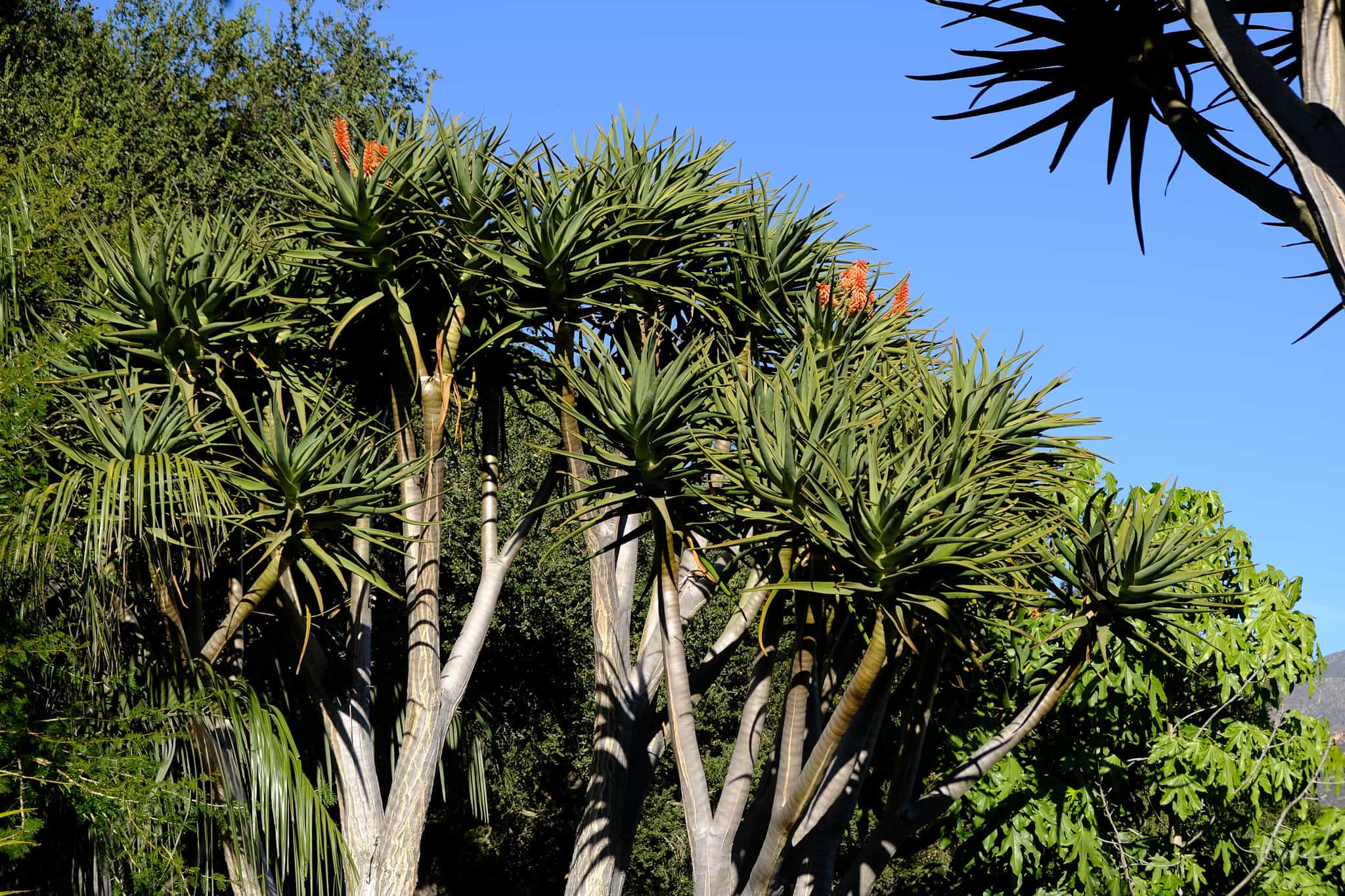 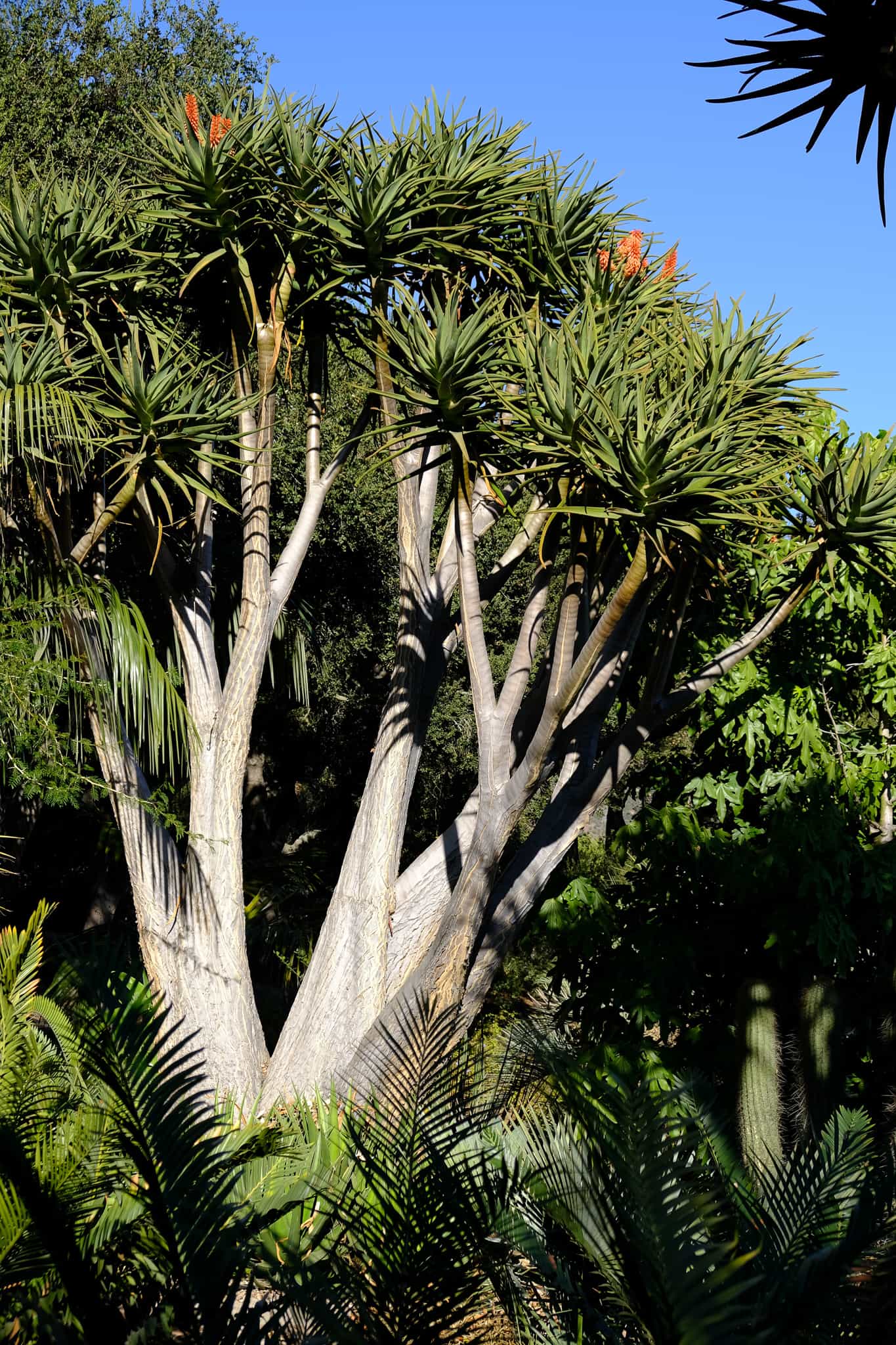 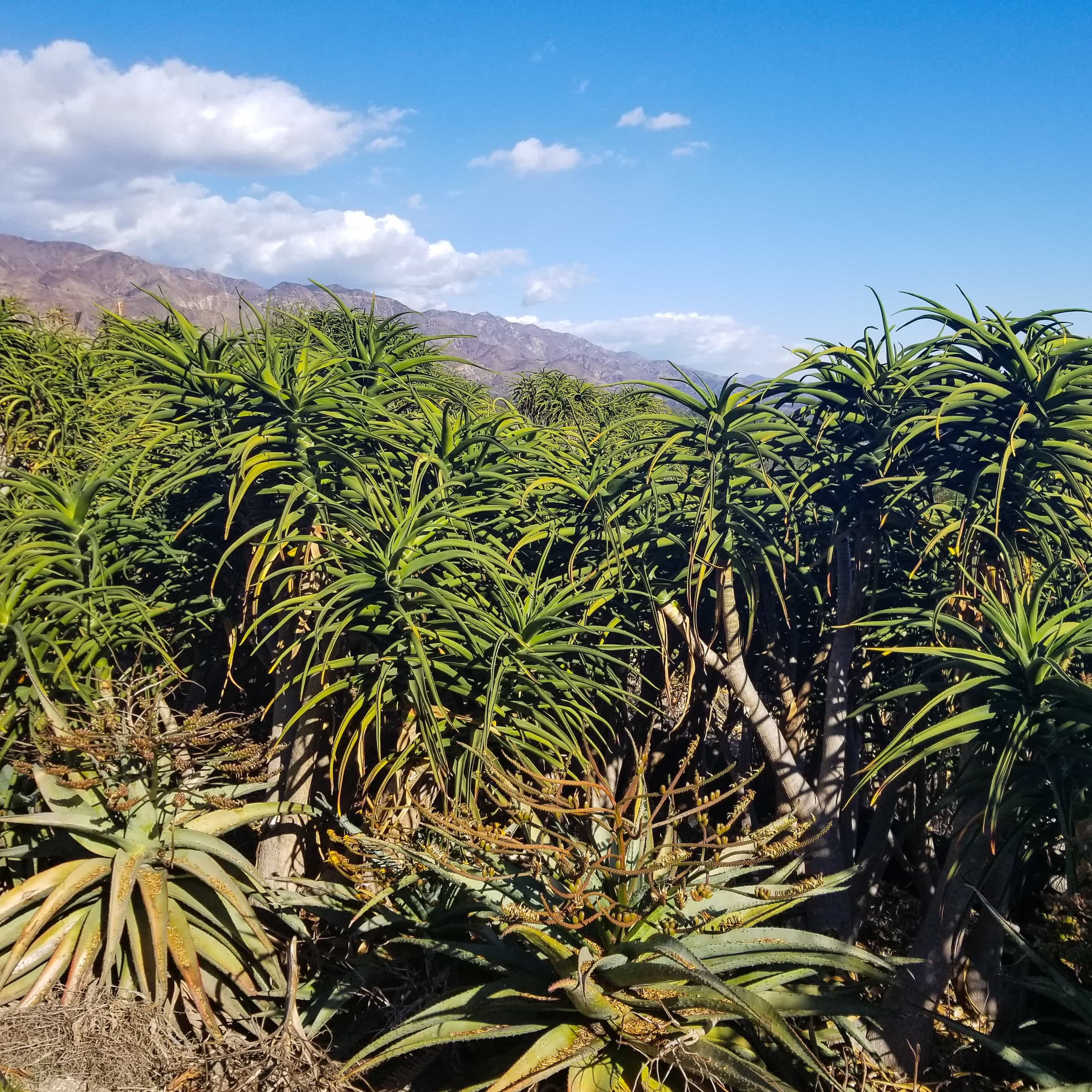 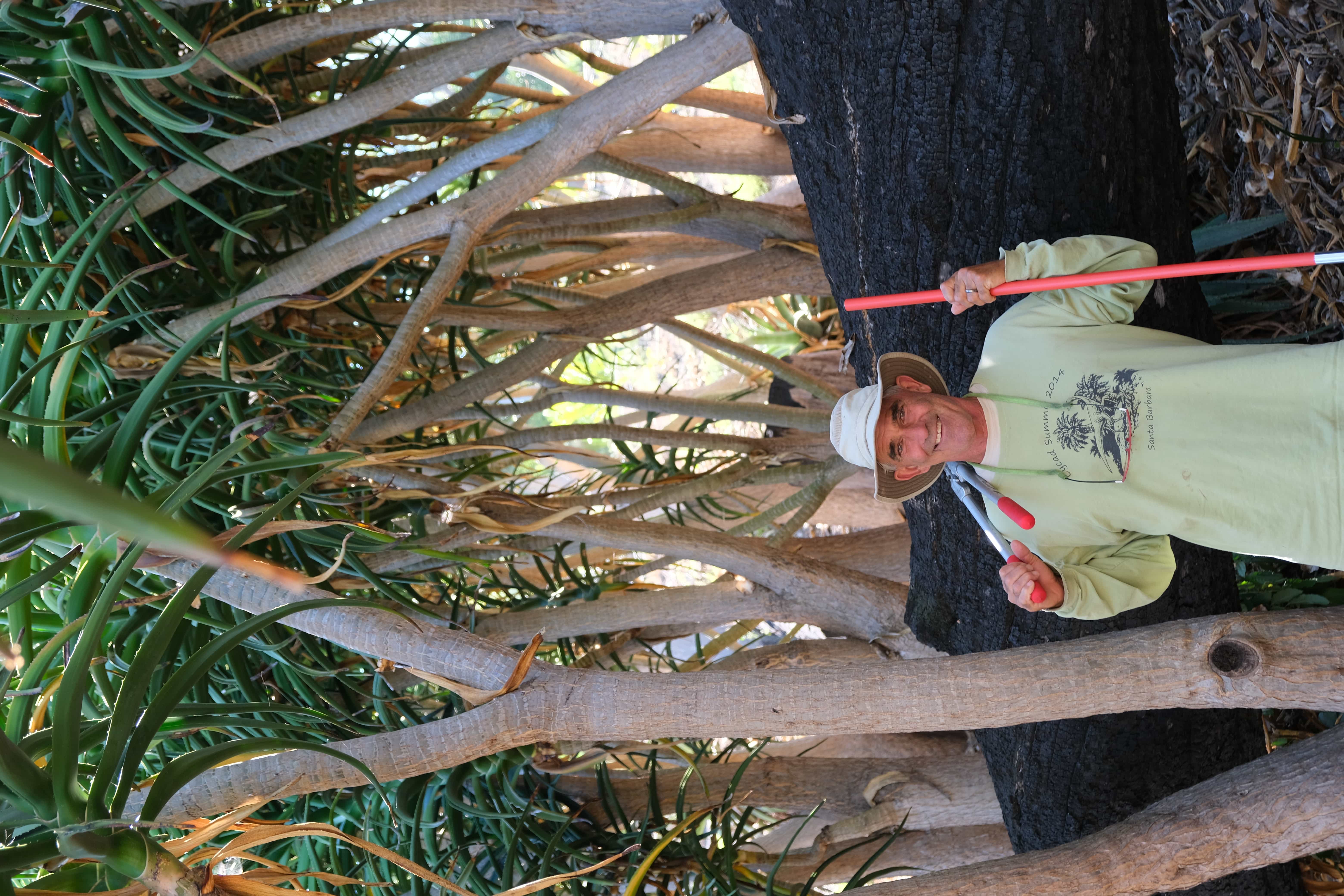 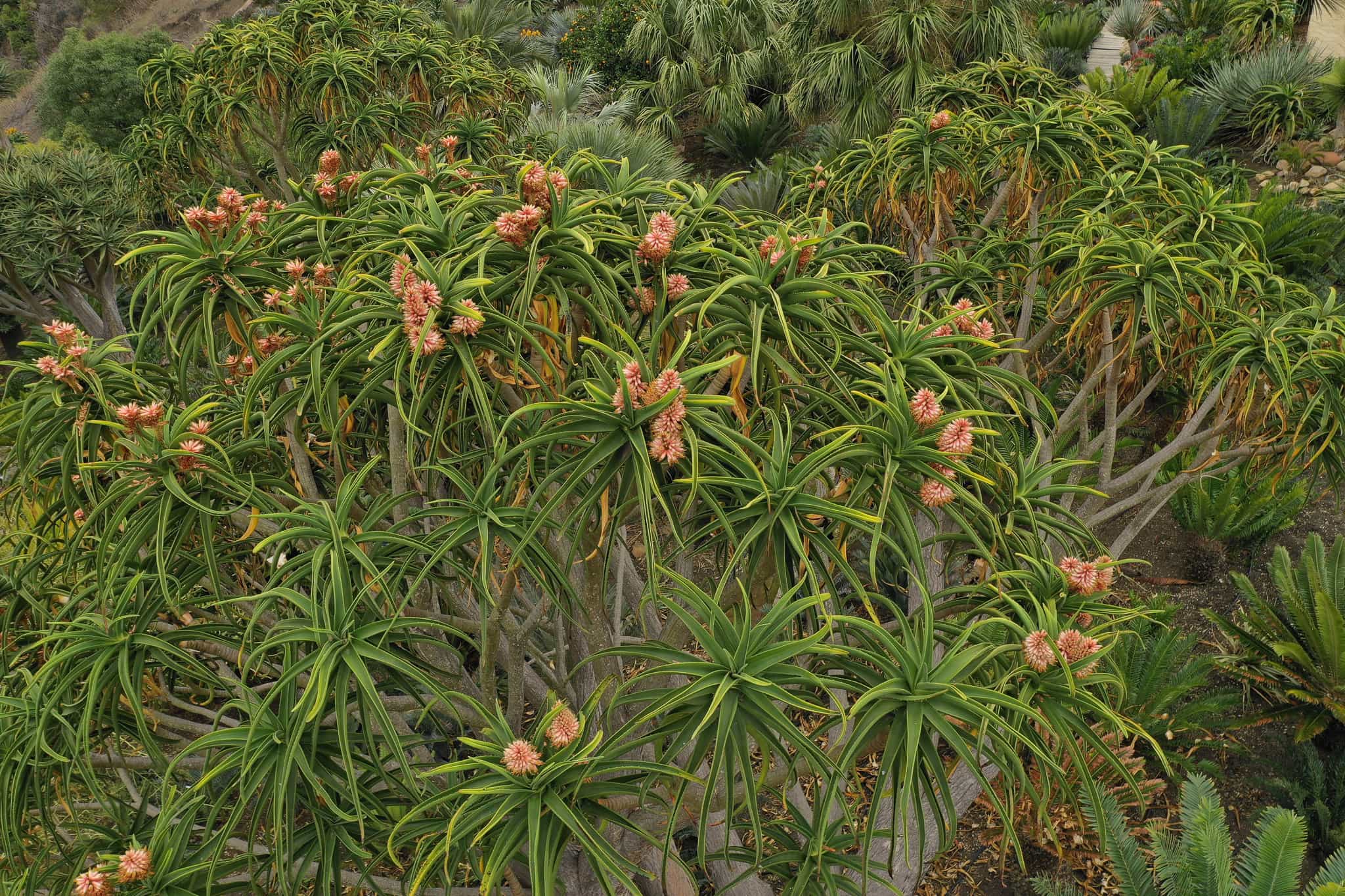 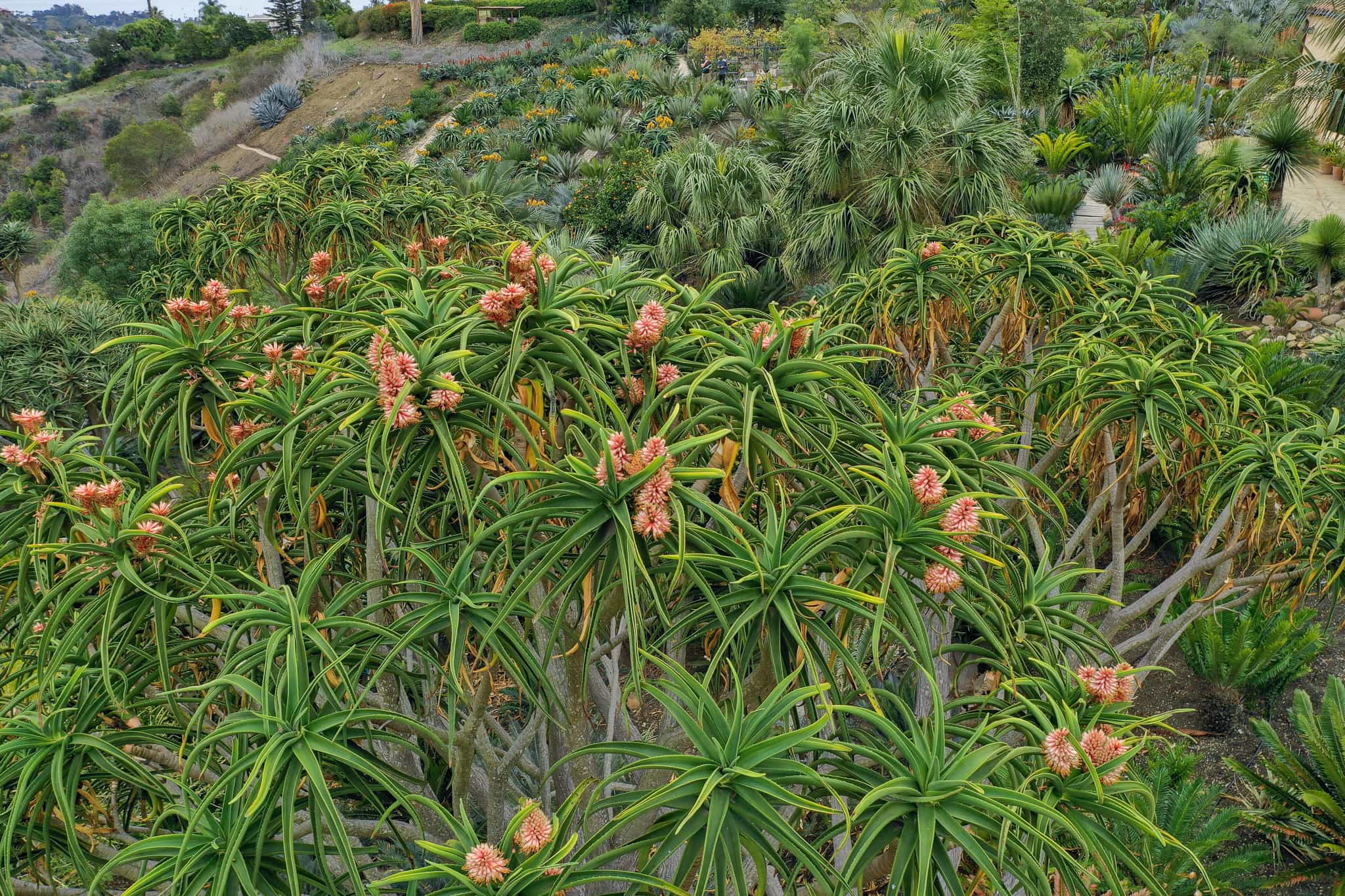 Description: The South Africans tree aloe Aloe barberae (known for many years as Aloe bainesii), is a small to medium-sized, much-branched tree with a massive trunk and high rounded crown that can take a variety of shapes and sizes. In its native land this slow-growing tree can reach 18-20 m high. It is widely used as an ornamental plant in tropical and Mediterranean gardens and can certainly be described as a timeless classic. Aloe barberae is Africa's largest aloe.
Stem: Trunk, single, erect 0,9-3 m in diameter, copiously branching dichotomously (either two or three-forked). The bark of the tree trunks is greyish-brown and rough to the touch. The branches are long, arm-like, tapering, naked, and sprout rosettes of long and narrow leaves at their ends.
Leaves: About 20 per rosette, 60-90 cm long, 7-9 cm broad, deeply channelled, recurved, dark green, spineless on both surfaces. Margin edged with a whitish line and small brown-tipped teeth, that are, firm horny, 2-3 mm long and 10-25 mm apart.
Inflorescence: 40-60 cm long, erect, simple or divided into three side branches (mostly 2-branched). Racemes cylindrical, slightly acuminate, 20-30 cm long and 8-10 cm in diameter, dense. Bracts linear-acuminate, 10 mm long, 1 mm broad. Pedeicel up to 10 mm long.
Flowers: Tubular, rose-pink or oran ge (Maputaland coastal form) and green-tipped 33-37 mm long. Base rounded. Tepals free for 28-32 mm long. Stamens exserted 15 mm long.
Blooming season: It flowers in winter (June and July in habitat) and in its natural environment is pollinated by sunbirds.
Fruits: Dry capsules. The capsules ripen during late spring and release their seed which is wind dispersed.
Chromosome number: 2n = 14

Notes: This species was previously known as Aloe bainesii Dyer, a name published in the same paper as Aloe barberae. A few months later Dyer published a note in which the 2 taxa were united, and he chose A. barberae as the name for the united species. This later note was overlooked until attention was drawn toil by Smith & al. (1994). In accordance with ICBN Art. 11.5, Dyer's choice of name must be used.

Cultivation and Propagation: Aloe barberae is an attractive and interesting accent plant to have in a sunny garden. It easy to grow and suited for any well drained soil in full sun. As such it is increasingly used as an ornamental plant for drought tolerant landscaping and rockeries.
Growing rate: It is fairly fast growing, but should be well watered and enough compost provided for optimal growth. It is able to increase its height by 10-30 cm per year under favourable conditions. It is a long lived plant and once established, it will be content in its position and with its soil for years. It is often in danger of being overgrown, smothered and killed by faster growing plants in its vicinity.
Soil: Always use a good quality, loamy sandy soil with plenty of drainage chips at the bottom of containers. It prefers soil of a medium or slightly acidic pH. Outdoors always provide a well-drained site, on a slope is best. Enough space should be provided for its eventual size.
Fertilization: It needs a perfect fertilizer diet in summer. Use preferably a cacti and succulents fertilizer with high potassium content including all micronutrients and trace elements or slow release fertilizer.
Exposure: Full sun. It can tolerate moderate shade, and a plant that has been growing in shade should be slowly hardened off before placing it in full sun as the plant will be severely scorched if moved too suddenly from shade into sun.
Watering: It tolerates weekly watering in the summer; once a month, or not at all in the colder months of winter. Can withstand long periods of drought, but they will thrive and flower more profusely if watered in the correct season.
Pest & diseases: Incorrect watering, poor drainage or too much shade can lead to attack by pests and diseases. Rot it is only a minor problem with aloes if the plants are watered and “aired” correctly. If they are not, fungicides won't help all that much. The leaves may be attacked by aphids and scale insects, which are controlled with an oil-based spray.
Hardiness: It is sensitive to frost and in a frost-prone area should be protected in the first few years of its life, but prefers hot summers. It grows much better outdoors in spring and summer.
Gardening and landscaping: In mild climates Aloe barberae can be cultivated outdoors for use in landscaping, preferably planting it in hot and dry rock gardens. It forms a striking focal point in the garden, being an enormous sculptural tree with a neat crown. It will grow best in regions with a climate close to that of its native deserts – not too cold, and not too wet. Due to its massive stem base, it should preferably not be planted close to any buildings. It can be grown in large containers too.
Medicinal uses: the juice is purgative.
Propagation: It is easily cultivated from truncheons and smaller stem cuttings, as well as seed planted in autumn, in trays of coarse river sand. Cuttings must be dried out for at least 3 weeks before planting in river sand. Growing a mature plant from a seedling or single stem cutting would be a lifetime's work but by good fortune larger cuttings, sometimes known as truncheons with several branches and leaf-rosettes, can be rooted, but this may take several months and success is not always guaranteed. 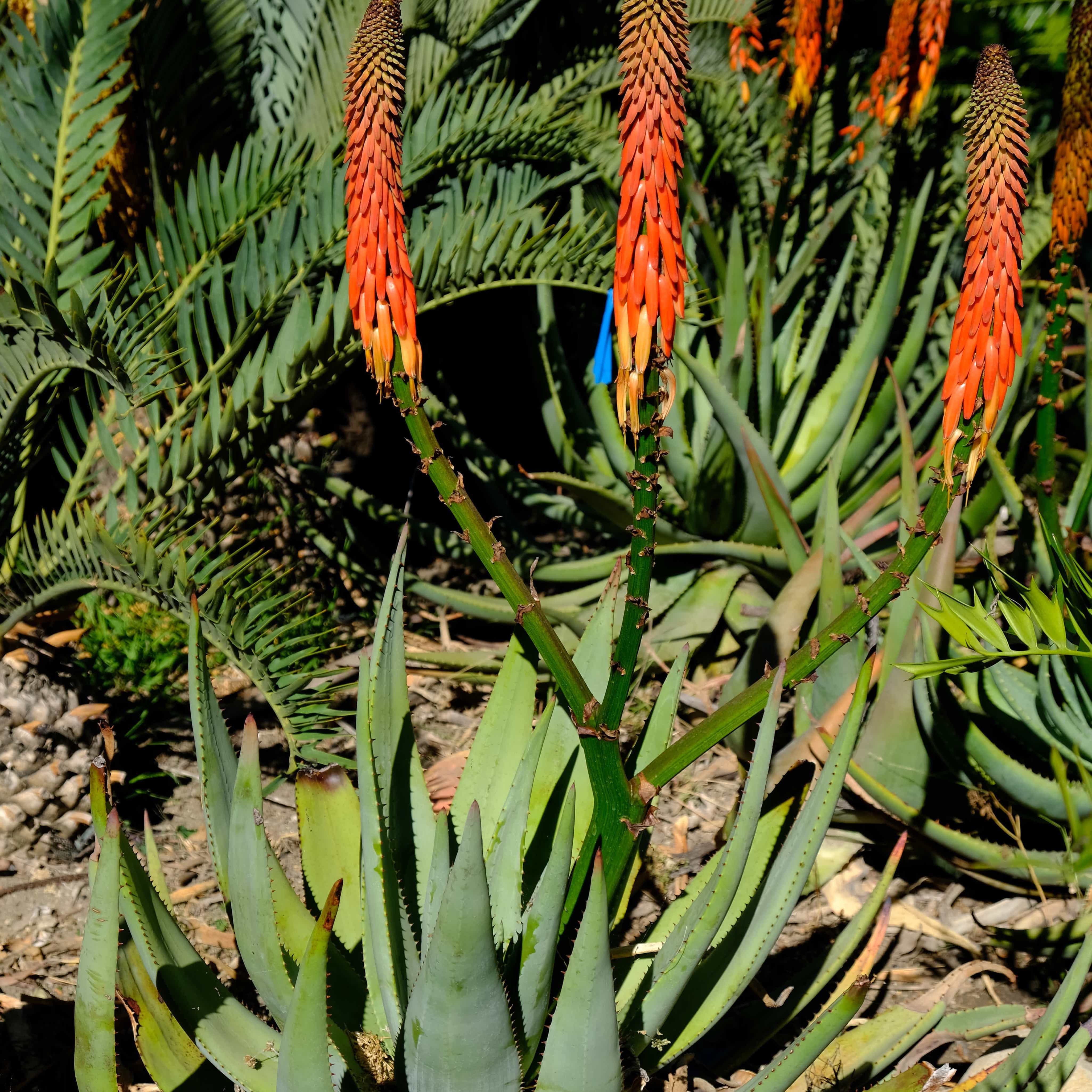 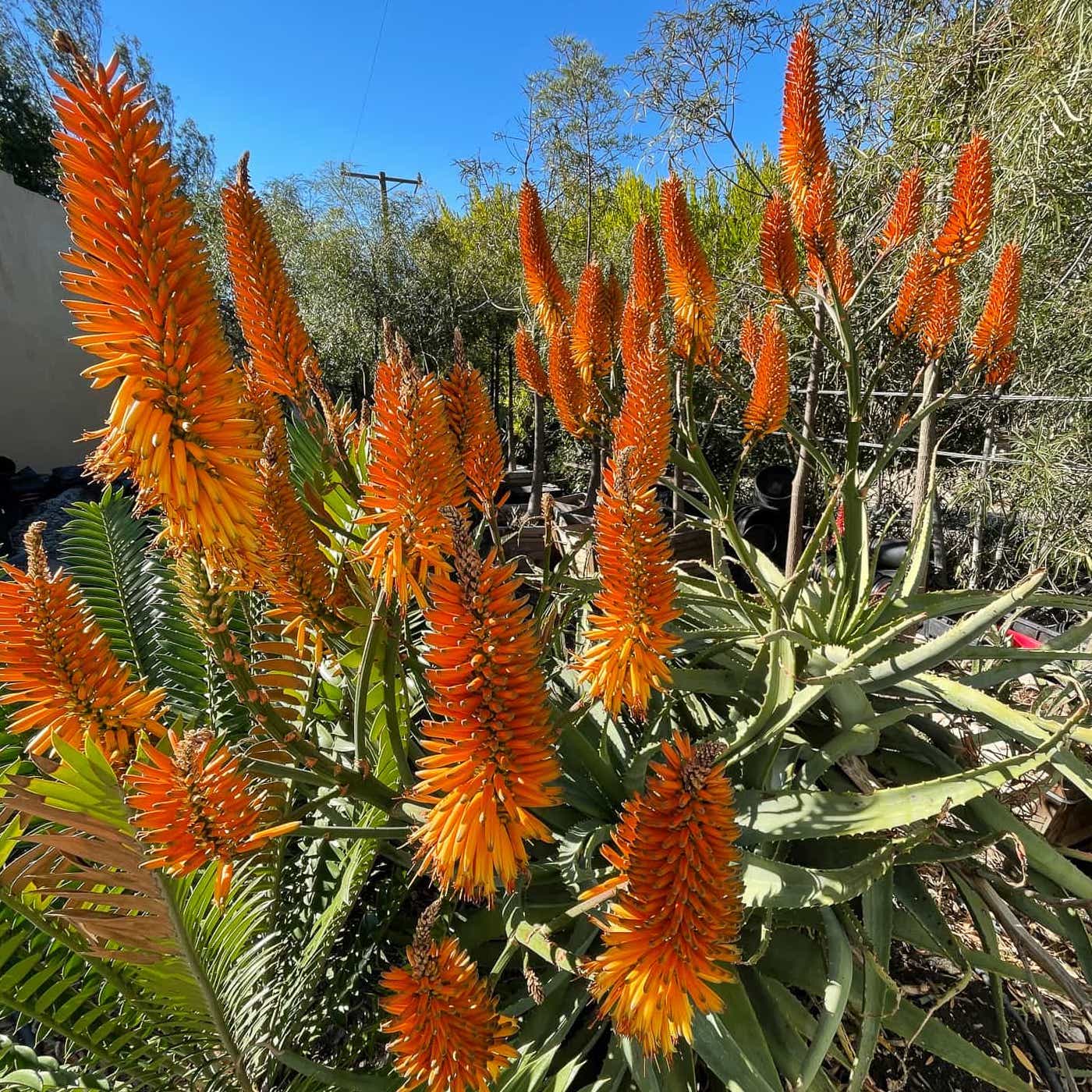 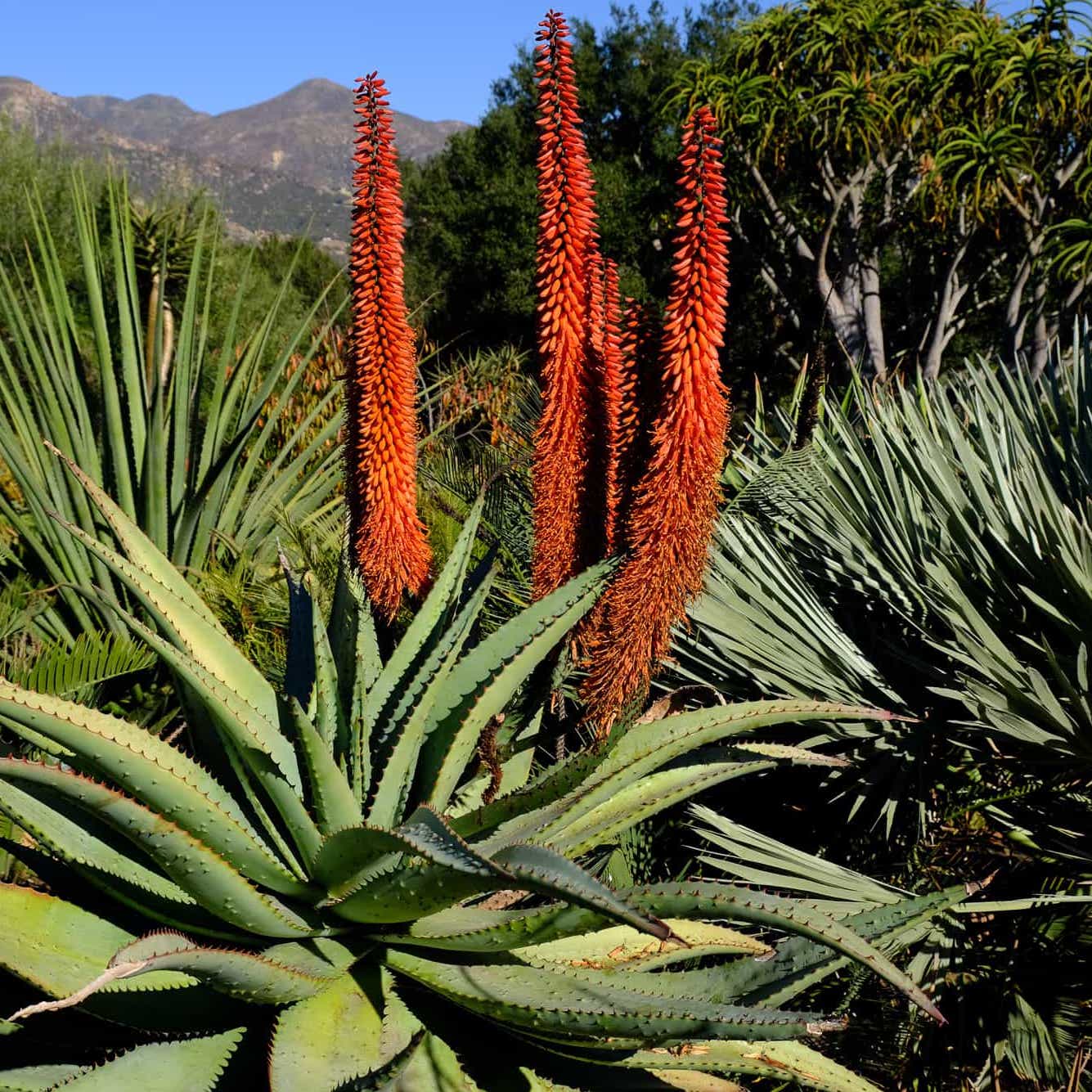