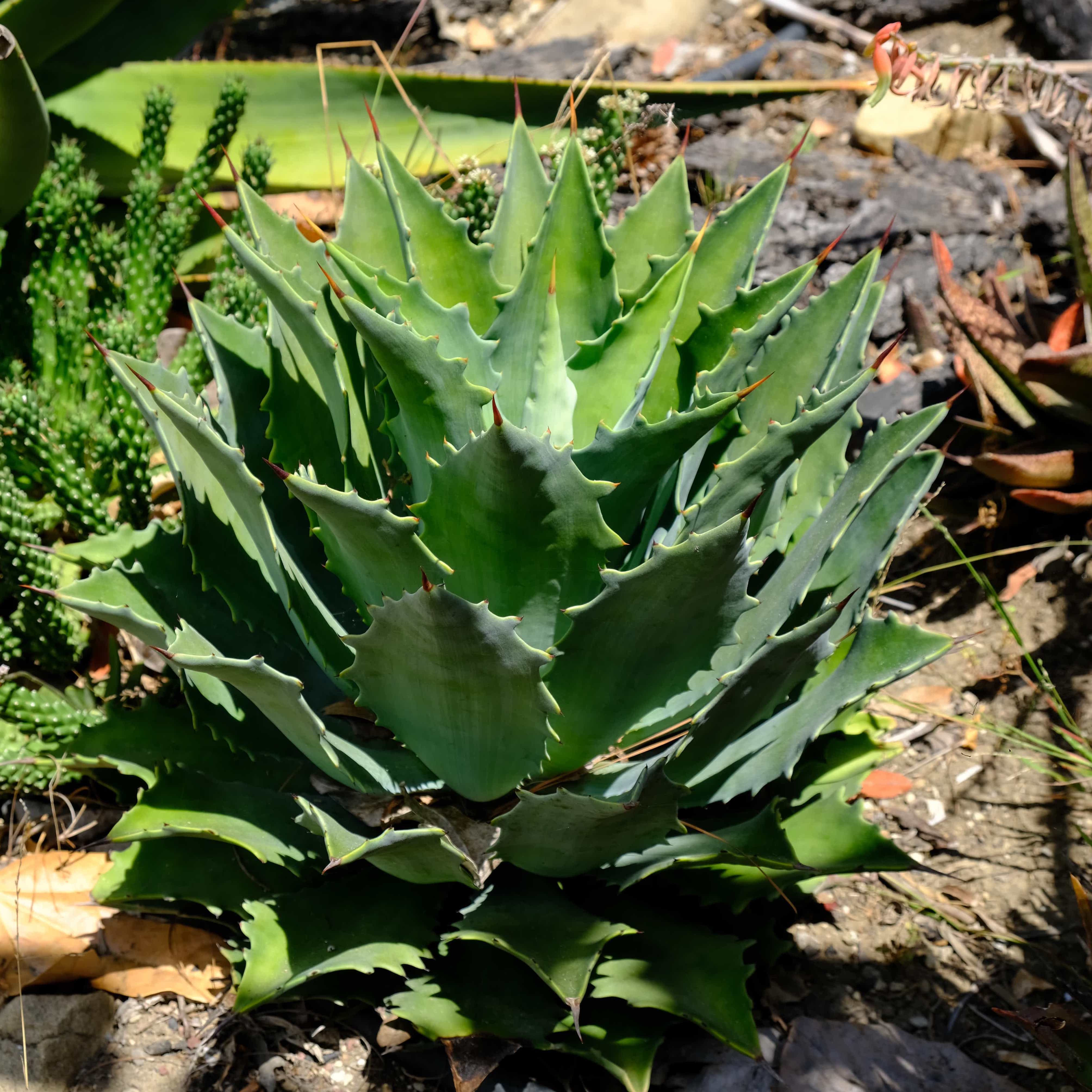 Origin and Habitat: Isthmus of Tehuantepec, which is located along the southern coast of Oaxaca and Chiapas in Mexico.
Altitude range: 50-2,875 ft (15-875 m) above sea level.
Habitat and ecology: This miniature marvel exists in three known localities. The coastal form is on a hillside just west of Salina Cruz, Oaxaca, which is within spitting distance of the Pacific Ocean, while one of the inland forms occurs on an east-facing slope north of the town of Laollaga in Oaxaca. Plants near Salina Cruz can be found growing tucked in among grasses and boulders, trying to stay out of the midday sun which can be brutal, even that close to the ocean. 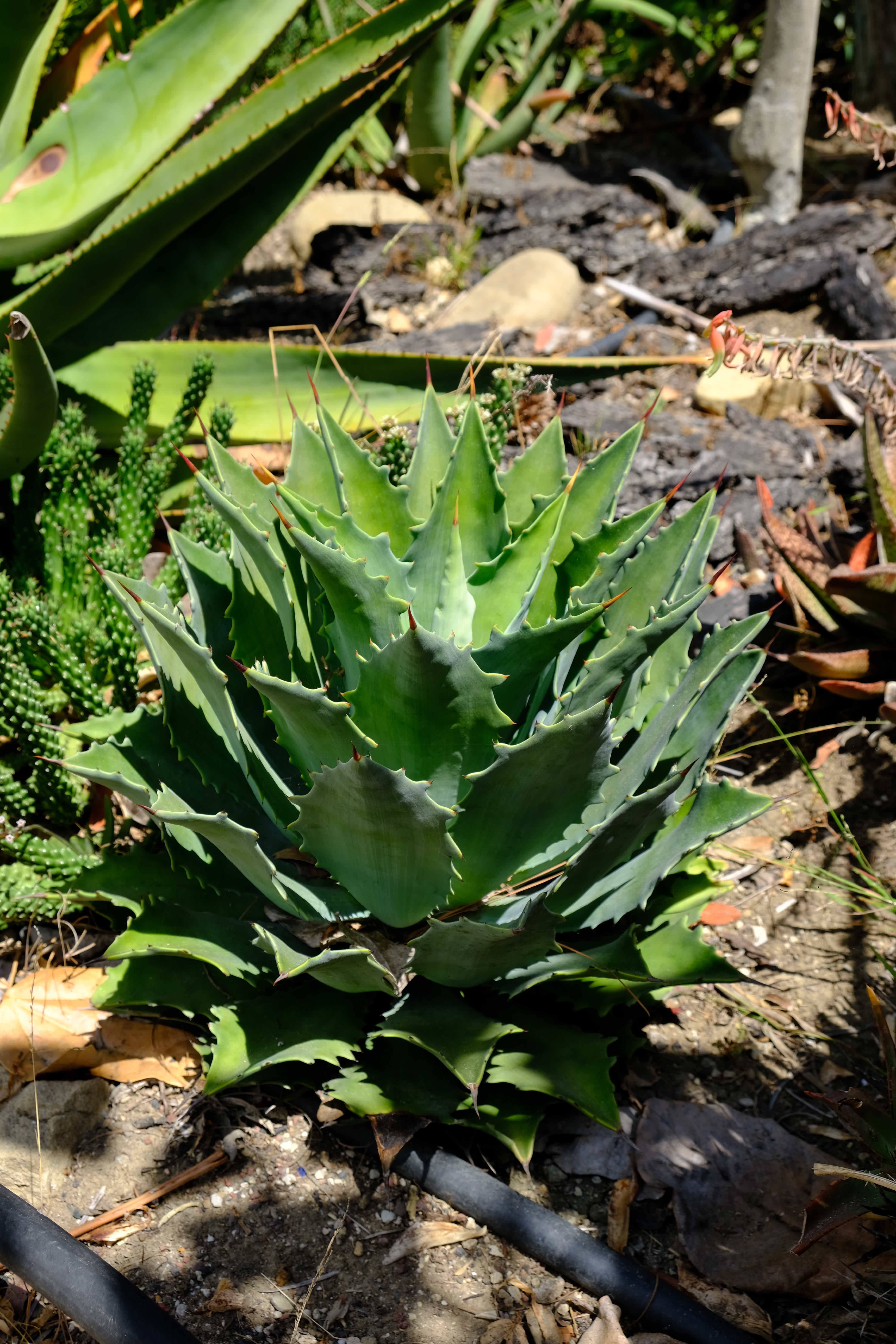 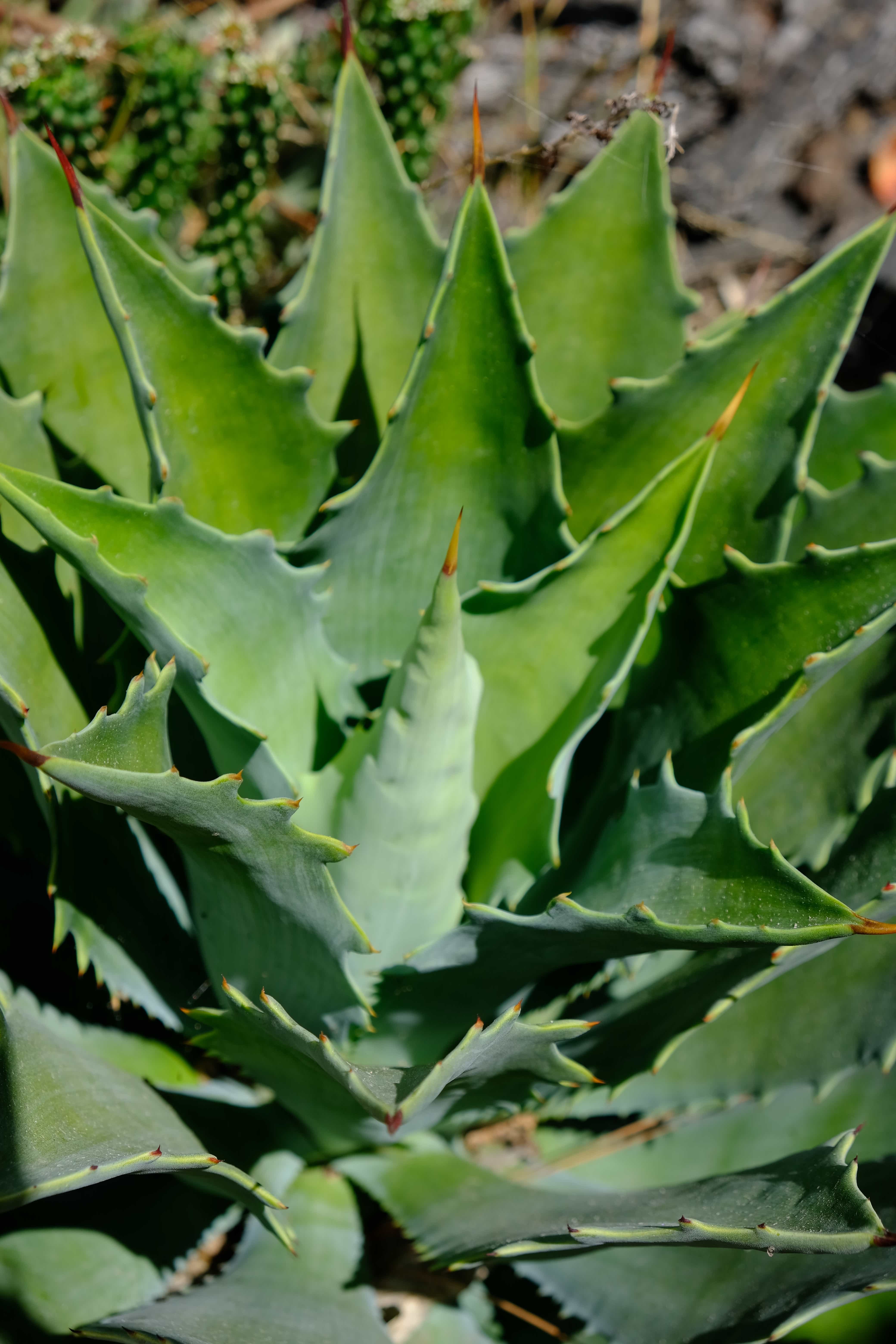 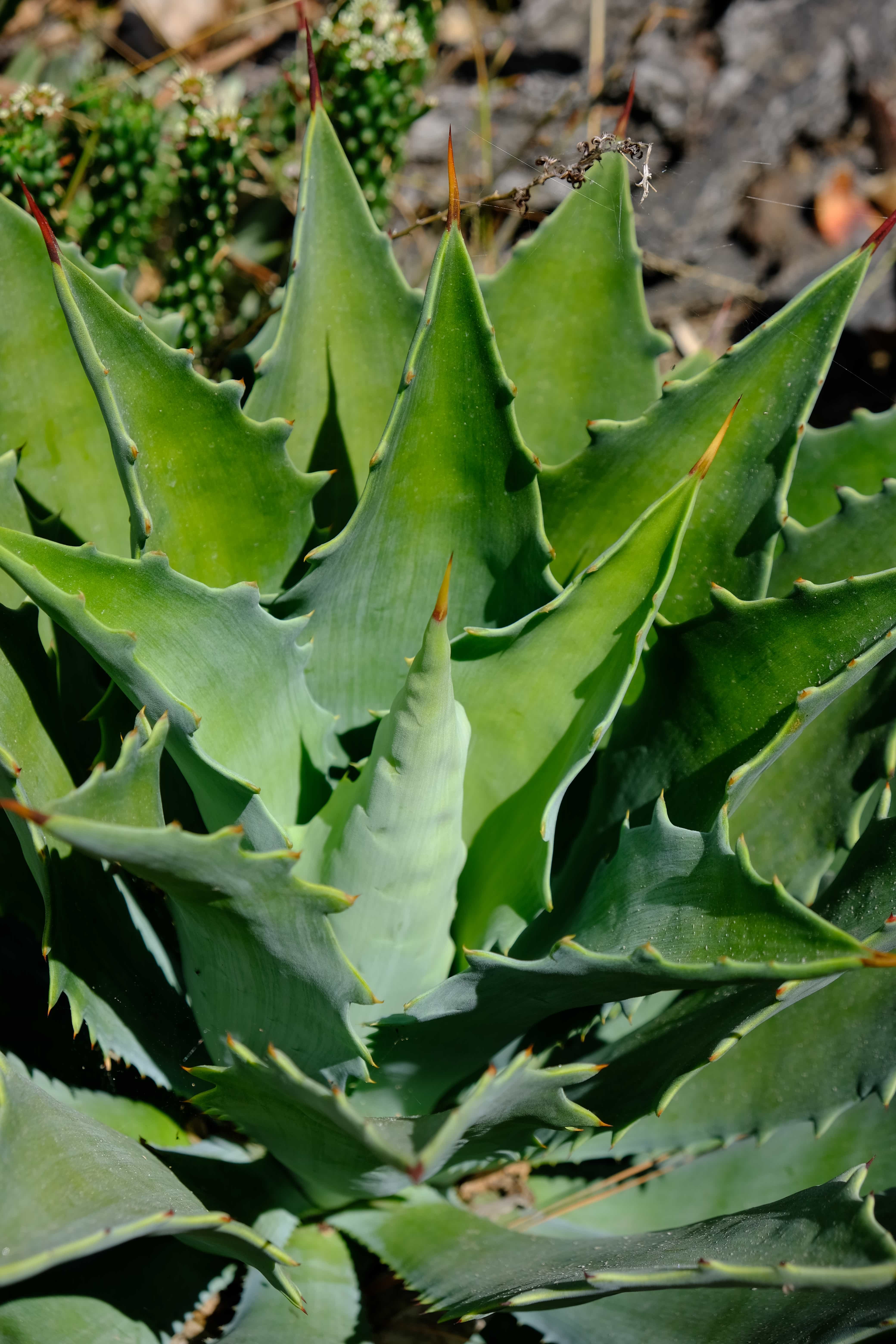 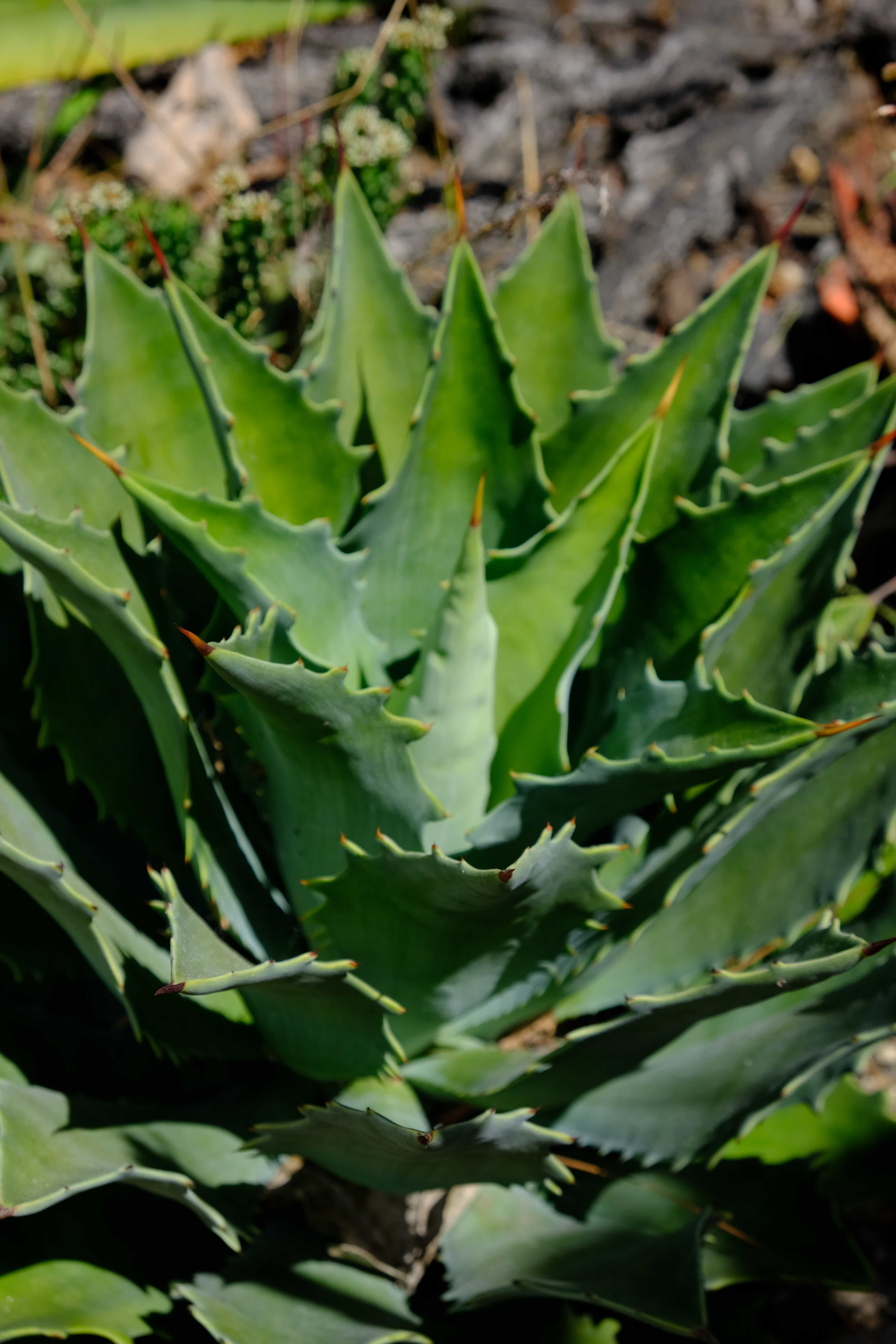 Description: Agave isthmensis(Dwarf Butterfly Agave) is are small but quite variable, offsetting agaves with the individual rosettes less than 30 cm tall by an equal width with 10-13 cm long by 5-7.5 cm wide powder-grey-blue ovate leaves that narrow towards the base and are at their widest near the tip. The leaves have margins that have shallow rounded lobes with prominent dark reddish-brown teeth and a terminal spine. The best forms have powdery blue leaves, black teeth, and black spines. This plant is monocarpic but offsets readily, and suckers tend to remain very close by mother plant .The flower stalk can reach to 150-200 cm tall with short side branches bearing yellow flowers.
Remarks: Often misidentified in collections, Agave isthmensis has been somewhat of a problematic species frequently considered merely one of many forms of Agave potatorum, and populations of this species are often found right next to populations of Agave potatorum with some intermediate forms seen as well. May be some of the plant in the trade as Agave potatorum var. verschaffeltii might actually be a compact form of Agave isthmensis. However, in 1993 the botanists Abisai Garcia-Mendoza and Felipe Palma Cruz recognized A. isthmensis as a distinct species, separate from A. potatorum based on the smaller flowers and overall size.
Derivation of specific name: This member of the cactaceae family was given this name by
Abisai Garcia-Mendoza and Felipe Palma Cruz that used this agave's occurrence on the Isthmus of Tehuantepec in southern Mexico as the inspiration for the species name.
Rosettes: Compact, small, with 84 t0 132 tightly packed interlacing leaves, solitary or with few to several rhizomatous offshoots in young plants and axillary shoots in adult plants. The plants comes in two forms. The smaller one with the individual clustering rosettes not taller than 12-13 cm, and 15-20 cm in width, while the larger one (near Salina Cruz) 17-32 cm tall and 25-36 cm wide and produce fewer offsets than those to the north of Santiago Laollaga.
Leaves: Powder grey-blue, icy blue,rough to the touch up to (5-)10-13(-15) cm long by (2.5-)5-7(-8) cm inch wide, obovate to spoon-shaped, concave, that narrow towards the base and at their widest near the tip. Apex almost truncated. The margins have shallow crenate lobes (mammillate projections) with prominent deltoid, dark reddish-brown or black teeth 2 - 3 cm apart and 1 to several smaller intermittent teeth, 1-4 mm long. The terminal spine is dark brown to black subulate, terete, smooth, sharp, 3-4 cm long and decurrent 6-10 mm on the leaf. It contrasts beautifully with the powder blue leaves. The relatively large teeth make impressive bud imprints on the surrounding leaves.
Inflorescence: The thin flower stalk can reach to 1,5-2,2 m tall with about (6-)15-25 short side branches (9-16 cm long) located in the upper 3/4 of the scape; bracts of 3-4-3.8 cm long 4,5-6.9 cm wide, deltoid and papery.
Flowers: 3.6-5 cm long, succulent, yellow, flushed rusty-red, clustered at the tip of the lateral branches. Bracteoles less than 5 mm long, early deciduous. Pedicels 3 mm long, elongating up to 1 cm during the fructification. Ovary 1.6-2.1 cm long. Tube 4-5 mm long, funnel-shaped tri-sulcated. Tepals of 19-21 mm long, by 4 mm wide, oblong, subequal. Filaments 27-33 mm long, inserted into the base of the tepals, yellow; anthers 14-17 mm long, Yellowish.
Fruits (capsules): 1.6-2.2 cm long by 1.0-1.8 cm wide, ovoid, apiculate.
Seeds: 1-2 mm long mm wide, flattened, black.
Phenology: The flower stalk starts to appear in summer, with flowers opening in late summer and capsules beginning to ripen in fall.
Flowers: Yellow nearly 5 cm long.

Cultivation and Propagation: This is a small growing species and waterwise. Plant in full coastal sun or filtered to part sun inland, but potted plant will burn easily leaving weird necrotic patches if suddenly exposed to sun. It is half-hardy and can tolerate light frost, but if frost is expected, cover plants with a towel or blanket. This Agave grows best in a soil with good drainage.
Uses: Rockeries or container growing will suit this plant. It is well adapted for container cultivation.
Propagation: It is a suckering succulents and pups can be removed and planted, it is also often reproduced by seed. 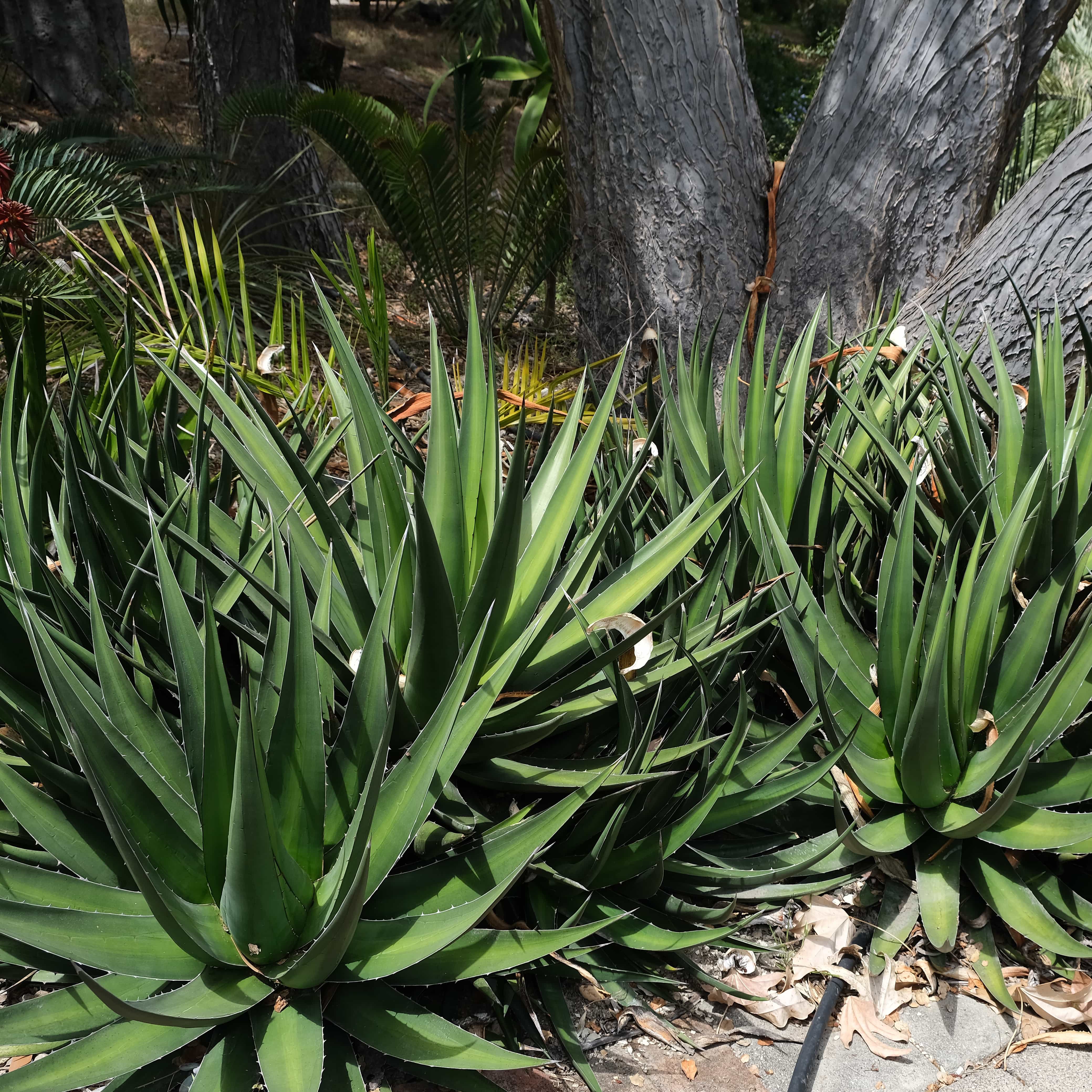 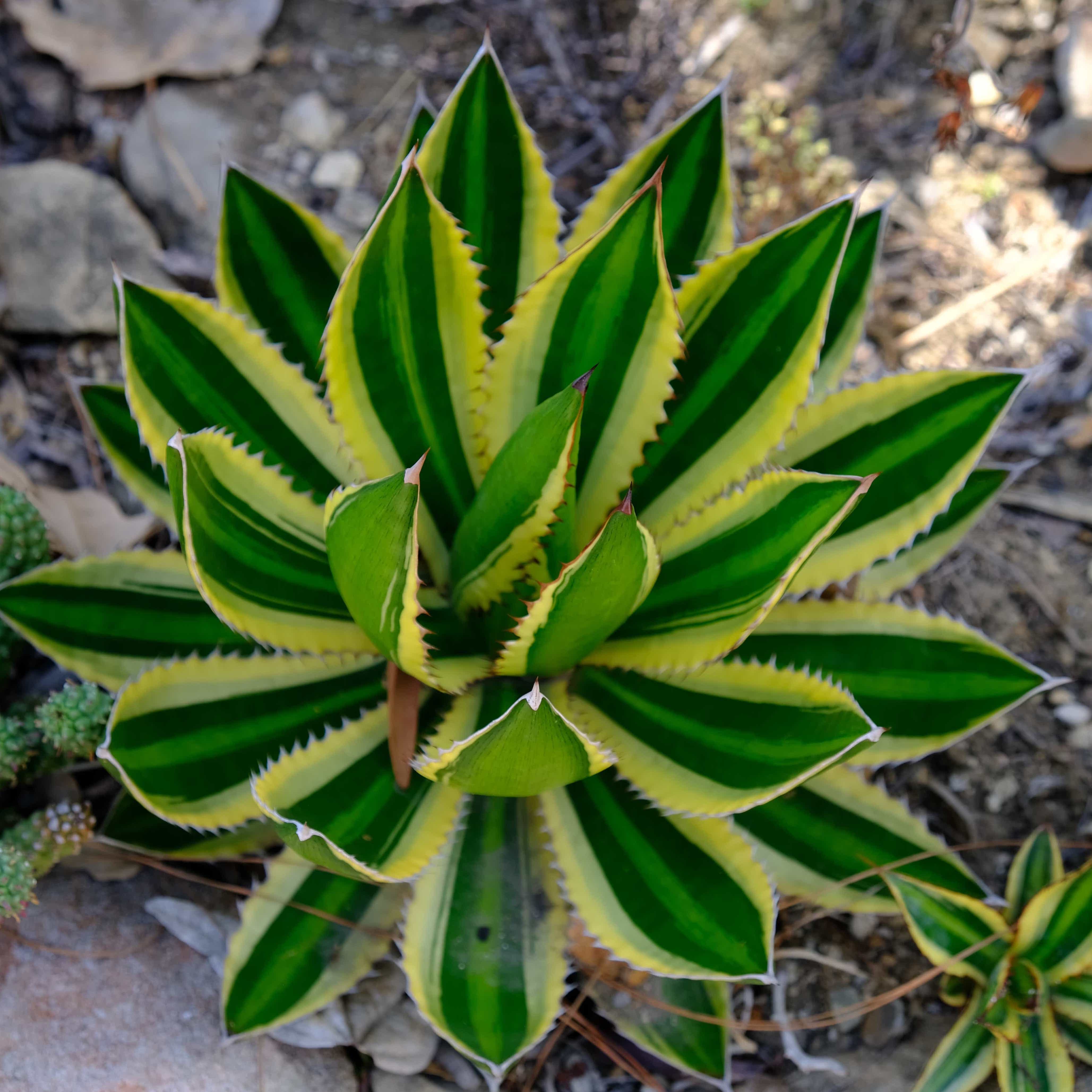 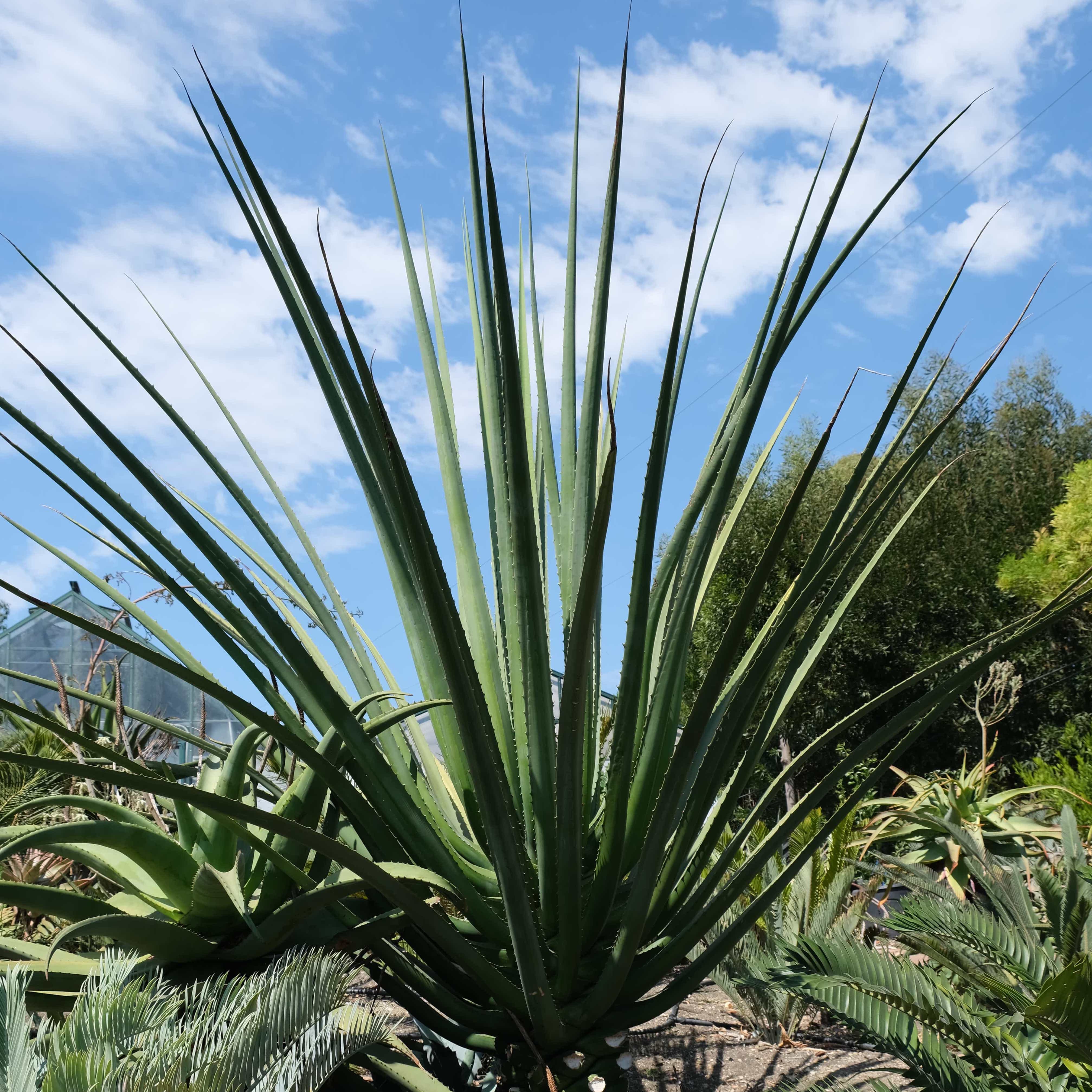